Back in July Massachusetts’ anti-gun Attorney General Maura Healey unilaterally rewrote the law on what constitutes an “assault” weapon and then banned them under her new definition.

At the same time, she issued imperious demands from Remington and Glock to provide her office with all manner of private company information relating to the “safety” of the companies’ ammunition and firearms.

Her anti-gun ideology was clear when she banned the newly defined assault weapons, saying,

The Passing of Don Kates: More Evidence of the Ripple Effect of One Man’s Life

This article was published by the McAlvany Intelligence Advisor on Wednesday, November 9, 2016: 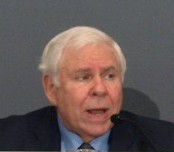 The Merriam-Webster dictionary defines “ripple effect” correctly: a spreading, pervasive, and usually unintentional effect or influence on future events. Don Kates, a scholar, lawyer, and research fellow with the Independent Institute in Oakland, California, likely never intended that his scholarly fulminations against the gun controllers of his day would reach all the way to the Supreme Court.

But they did, and every American, whether they own a firearm or not, benefits from his work today.

It started with an unheralded piece of work he did in 1983,

This article appeared online at TheNewAmerican.com on Wednesday, November 25, 2015: Seeking once again to take advantage of an opportunity, anti-gun Democrats are using the horrific massacre in Paris to revive a moribund bill by Senator Dianne Feinstein (D-Calif.) to remove precious rights from anyone on the government’s “no-fly” or “terrorist watch list.”

Senate Bill 551, offered back in February, was dead on arrival, but

This article appeared online at TheNewAmerican.com on Monday, August 24, 2015:

The fifth annual report from the Fraser Institute, “The Human Freedom Index,” showed the United States falling further in a global measurement of personal, civil, and economic freedom, from 17th place in 2011 to 20th in 2012 (the latest year for which reliable data is available). Ahead of the United States are Canada in 6th place and the United Kingdom, in 9th place. The United States barely edges out the Czech Republic and Estonia, in 21st and 22nd places respectively.

Wrote Ian Vasquez, one of the report’s co-authors:

Congress, by Voice Vote, Foists International ID Cards on Everyone

This article was published by The McAlvany Intelligence Advisor on Friday, June 12, 2015:

Politicians have a knack for naming their bills with titles that are backwards, intended to deceive. There’s the Patriot Act, instead of the Fourth Amendment Obliteration Act. There’s the Affordable Care Act, which makes healthcare more expensive and less available.

And then there’s the Girls Count Act, a deceptive title designed to lead one to believe that it has something to do with empowering girls worldwide, making certain that they have access to services and are able to exercise all their rights. Even the opening paragraph expands the deceit:

This article first appeared online at TheNewAmerican.com on Thursday, June 11, 2105:

Anyone checking in for an airline flight on January 1, 2016 and thereafter will be turned away if his driver’s license isn’t “REAL ID compliant,” according to Transportation Security Administration (TSA) officials.

But, “it’s a choice,” according to Nevada’s Department of Motor Vehicles Public Information Officer David Fierro: “It’s not mandatory. It’s a choice for secured identification. If you use a passport when you’re travelling you won’t have any problems. If you use your driver’s license for identification, you’ll need to either apply for the REAL ID card, or get a passport.”

To be compliant, driver’s licenses must capture specific identifying details about the person and then associate them with a unique identification number. DMV.org lists those details:

National Reciprocity law: the Wrong way to do the Right Thing

This article first appeared at The McAlvany Intelligence Advisor on Monday, May 18, 2015:

Member of the House of Representatives Marlin Stutzman (R-Ind.) has let his enthusiasm run away from his good sense. For the third time in a row he has offered a bill giving power to the federal government to force the states into granting nation-wide “reciprocity,” so that anyone with a concealed carry permit, or a resident of a “permitless” state, can carry anywhere he wants in the country without repercussions. An identical bill was presented in the Senate by Senator John Cornyn (R-Texas).

This article first appeared online at TheNewAmerican.com on Friday, January 23, 2015: The sheriff of Fulton County, New York, Thomas Lorey, made a presentation to some Second Amendment supporters on Friday, January 16. The next day seven minutes of it was posted on YouTube. He told them that Fulton County has been targeted by New York’s state capital, Albany, for a “pilot program” to see if those owning handguns in his county would desire to renew their permits to possess them early, for a small fee of $15. (In New York, one must have a permit to even own a handgun.) He was very against renewing the permits early, or renewing them at all, for that matter. He explained:

I want to set the record straight. Fulton County is one of the pilot counties.… They are going to send out 500 invitations to my county and that’s all they are … invitations.

I’m asking everyone that gets those invitations to throw them in the trash because that is where they belong.

Mike Piccone, the Guns & Gear editor for the conservative blog The Daily Caller, gave a bit of background to the circumstances: Franklin Shook, a member of the board of Oath Keepers, explained that “What Oath Keepers is saying is:

President Proposes Doubling the tax Subsidy for the Poor

President Obama’s proposal to double the earned income tax credit (EITC) for the working poor on March 4 came with all the attendant benefits such an expansion would provide: it would reduce poverty while encouraging people not working to get a job. It would expand the existing law to cover an additional 16 million families with 30 million children.

In his State of the Union Address in January, the president warned this was coming,

This article in the Washington Post perfectly misses, perhaps deliberately, the key issue concerning privacy and the role of government. See if you can pick up on it.

Daniel Solove is the author, and has all the liberal credentials to promote the establishment line: JD from Yale Law School, is an “expert” on privacy with many books on the matter (some of them best sellers), and has been quoted in such mouthpieces as the New York Times, the Chicago Tribune, ABC, NBC, CBS, CNN and NPR. Not a single citation for anything remotely right of center: Washington Times, National Review, American Spectator, etc. So we now where he is coming from.

His thesis: intrusion into our private affairs is concerning, but not too much. He frames his conversation around “myth-busting”, which is a

Those “dangerous fundamentalists” need to be watched

Ron Trowbridge is the Undersheriff of Prowers County, Colorado, located at the extreme southeast corner of Colorado, with a population of fewer than 20,000 souls. He decided to attend a training session in La Junta on April 1st, along with about 2o others, to learn about Sovereign Citizens and