Because the budget deal signed into law last week didn’t extend federal unemployment benefits, some 1.3 million people won’t be getting their $1,166 monthly checks, starting in January. By June another 1.9 million will be cut off.

Keynesians are sputtering nonsense about the need to extend benefits. President Obama called it an

Complaints about Obamacare Rollout Glitches are Merely a Smokescreen

This article was first published at The McAlvany Intelligence Advisor on Friday, October 25th, 2013:

The complaints, charges, accusations, finger-pointing, and back-pedaling associated with the stumbling start of Obamacare are real and accelerating. They are also irrelevant, and a smokescreen hiding the real underlying problems with Obamacare itself.

Late night comedians are mining this disaster for all it’s worth. They have struck gold, and they are permanently damaging Obamacare’s image, and along with it

Thursday’s announcement by the White House that it was “tweaking” Obamacare in order to keep some taxpayers from being penalized even after they purchased insurance obscured the vastly greater problems facing the new federally mandated health care program.

The vice president of the tax firm Jackson Hewitt, Brian Haile, first noted that it was possible, even likely, that

House Speaker John Boehner (R-Ohio) announced on Wednesday that he would schedule a vote for Friday on his newly revised bill to continue government spending at current levels but without funding for Obamacare, in response to pressure from a small but critically important group of Tea Party conservatives. Fresh from the hustings, that group, estimated to be about 40 in number, has been reminded afresh of their constituents’ demands to

Despite Big Push by Obama, Support for Syrian Attack Dwindles

Secretary of State John Kerry, following his meetings with more than two dozen European foreign ministers on Saturday in Lithuania, insisted that his efforts were successful in generating support for President Obama’s planned attack on Syria. But none of it endorsed military action but only that

Now that the source of the leak published last week in the Washington Post has identified himself, the response from defenders of the surveillance state was immediate and predictable. Edward Snowden, a 29-year-old employee of a National Security Agency (NSA) contractor, Booz Allen Hamilton, hoped that with the election of President Obama in 2008 the erection of the surveillance state in American would at least be partially dismantled. When it was clear that the infrastructure of that vast intelligence community and its increasingly threatening capabilities was

Justin Amash as been flying under the radar – until now.

With Senate Bill 649 likely to be the last chance Senate Majority Leader Harry will have to pass gun control legislation in this session, West Virginia Democrat John Manchin has been working hard to bring the National Rifle Association (NRA) into the discussion on how to

I’m not on the Southern Poverty Law Center’s list, again. Dang it.

I always look to see, though. It must mean that I’m not doing enough in the fight for freedom to warrant even a mention.  But some of my close friends are, though, so that counts for something.

The Southern Poverty Law Center monitors alleged hate groups, all on the right side of the political spectrum. Here’s how their report starts out. You’ll get their drift immediately:

I watched with fascination and admiration not only at Senator Rand Paul’s message but his stamina! I used to do some public speaking and once in a while I was allowed to say what I came to say without a time limitation. Those were rare occurrences indeed,

On January 31st Senator Rand Paul (R-Ky.) introduced his National Right-to-Work Act, S.204, subtitled “A bill to preserve and protect the free choice of individual employees to form, join, or assist labor organizations, or to refrain from such activities.” His timing couldn’t be any better.

One year ago Indiana joined the growing list of right to work (RTW) states, followed in December by

Resistance to the President’s Gun Control Plan Continues to Build

Admitting that passing his ambitious plan to rein in shooting incidents like the one that occurred in Newtown, Connecticut last month would “be difficult,” President Obama published a 22-page explanation of exactly what he has in mind. There are “four common-sense steps we can take right now,” according to the White House blog. The two steps meeting the most resistance are:

There are lots of reasons. But no one sums them up as well as John Hawkins. Hawkins says true conservatives don’t “trust the establishment Republicans as far as you can throw them.” And for good reason.

Katie Kieffer has named them: They are all Senators:  Rand Paul, Richard Shelby, Chuck Grassley, Marco Rubio, and Mike Lee. Each voted “no” on the fiscal cliff deal that roared through the Senate like a runaway pickup truck leaving the scene of an accident.

I expect my leaders to keep their word. If they tell me they are Republican, I expect them to 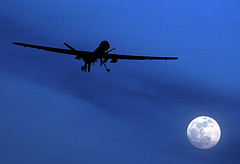 When Senator Rand Paul (R-Ky.) introduced his bill in June, he was responding to growing concerns over privacy by American citizens. The purpose of his bill is elegantly simple: “To protect individual privacy against unwarranted governmental intrusion through the use of unmanned aerial vehicles commonly called drones.” Paul’s bill is very specific:

[A] person or entity acting under the authority [of], or funded in whole or in part by, the Government of the United States shall not use a drone to gather evidence or other information pertaining to criminal conduct or conduct in violation of a statute or regulation except to the extent authorized in a warrant that satisfies the requirements of the Fourth Amendment to the Constitution of the United States.

Paul explained that “Americans going about their everyday lives should not be treated like criminals or terrorists and have their rights infringed upon by military tactics.”

One of those claiming to have had his rights infringed upon is Rodney Brossart of Lakota, North Dakota, who is “the first American citizen to be arrested with the help of a Predator surveillance drone,” according to USNews. Brossart’s troubles began in 2010 when six cows

With Ron Paul’s bill H.R. 459, the Federal Reserve Transparency Act, headed for a floor vote in the House in the next two weeks (and likely success at passage with 263 sponsors), he and his son Sen. Rand Paul (R-Ky.) are now focusing on the Internet.

Starting with his first term as a member of the House of Representatives from Texas in 1976, Paul has led the fight to expose the secret machinations of the Federal Reserve, making that his primary theme in the freedom fight. That theme can be traced to the publication of his The Revolution: A Manifesto in 2008 to his End the Fed in 2009, and finally to his latest book, Liberty Defined, published in January this year.

But with his campaign for the presidency likely to fail at the Republican Party’s convention next month and his decision not seek reelection to his House seat, Paul is passing the torch to his son. As explained on the C4L website: