I love Mark Perry’s expression, “Saudi America”, as he continues to survey the virtual explosion taking place in the oil industry in the US. It continues to illustrate what happens when free enterprise, private capital, and opportunity intersect without government intervention. Here’s a graph from his article: 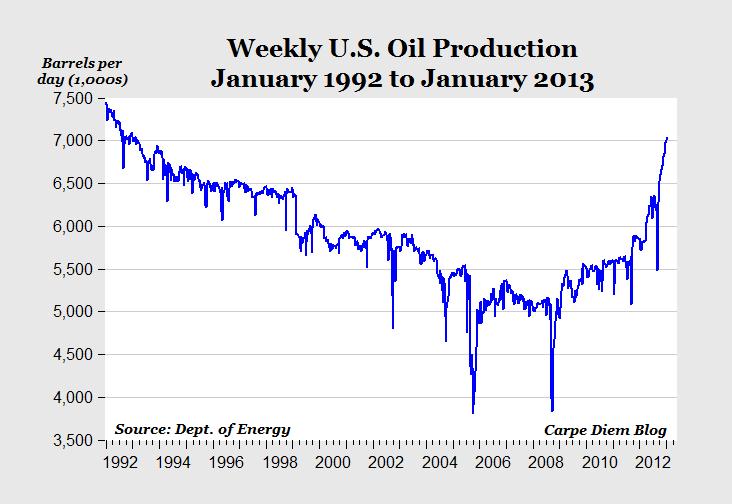 The increases in US crude oil output are accelerating, and the 23% annual increase through the second week of January  this year [compared to a year ago] was the highest yearly gain in domestic oil production in the last 20 years…

At the current pace of increase, US oil output could reach 7.5 million bpd by May of this year, which would bring domestic production to the highest level since January 1990.

Nothing I’ve seen better expresses how the free market works than this.

This is one of those good new/bad news stories, like seeing your mother-in-law drive off a cliff in your brand new Lexus. IHS Cambridge Energy Research has discovered 400 billion barrels of oil in California, an amount equal to half of the oil under the sands of Saudi Arabia, and far larger than the Bakken Formation in North Dakota or the Eagle Ford Formation in Texas.

It’ll be harder to extract because of how the shale oil is caught between folds of the earth’s crust, rather than sandwiched in layers in North Dakota and Texas. But several oil companies are investing in the possibilities and if they are successful (and left alone by environmentalists in Sacramento) the revenues could “solve the state’s budget crisis” all by itself, according to Katie Potter, a recruiter for oil field personnel at NES Global Talent. And just last month, 18,000 acres were offered to be leased out for initial drilling and “they were all snapped up” right away.

But the real problem will be, inevitably, Sacramento, the capitol city in the land of sunshine, fruits and nuts, especially enviros who never saw a drilling rig they liked. They especially won’t like how the oil will need to extracted because of the folds in the earth’s crust: instead of using fracking which involves water and sand and some chemicals, the process in California will involve hydrofluoric acid.

As gasoline prices approach (and in some places exceed) $4 a gallon nationally, the president appears to be taking much of the blame with two recent polls showing sharp declines in support for his handling of the issue.

The latest Washington Post/ABC News poll now shows a record number of Americans giving the president “strongly” negative reviews on his handling of the economy. Nearly two-thirds of those polled say they disapprove of how he is handling gas prices compared to just 26 percent approving—his lowest rating by the poll. Specifically, 59 percent of those polled disapprove of his handling of the economy in general, a jump of 9 points in just one month and this despite the appearance of some signs of an improving economy. Most of the damage being done to Obama is among independents with 57 percent now disapproving, along with 66 percent of white non-college graduates disapproving as well.

The New York Times/CBS poll also showed the president losing 9 percentage points of approval during the past month, with 47 percent of those polled voicing their disapproval.

In a third poll by the Christian Science Monitor two-thirds of those polled say that the government should allow increased production from offshore wells and from shale deposits on federal lands as a way to increase supply to bring down prices. 54 percent favor drilling in the Arctic National Wildlife Refuge (ANWR) in Alaska, while 47 percent favor rolling back some environmental restrictions to help increase energy production. That poll also reflected expectations that the price of gas will exceed $4 a gallon nationally within the next three months and one-third of those polled are expecting $5 a gallon gas by summer.

The president’s response has been, as it has been since his election, to push for alternative energy resources such as renewables and wind. His recent decision to stop the Keystone XL Pipeline project reflects his commitment to raising prices on oil in order to make alternatives more attractive. His comment on Saturday’s weekly address that “We can’t just drill our way to lower gas prices,” reflects that ideology.

In North Dakota, however, that is precisely what is being done to increase oil production, with North Dakota on track to overtake

North Dakota: A Study in How the Free Market Works 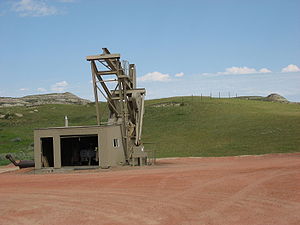 The continuing boom in North Dakota seemingly has no end. Last June oil production from the Bakken Formation exceeded 11 million barrels a month. In February it reached 16 million with estimates that by late spring North Dakota could be producing more oil than either California or Alaska. That’s more than double what the state produced just two years ago.

The population boom in Williston and elsewhere continues to set records. The oil industry employs more than 30,000 people and could exceed 100,000 if production rises as expected to a million barrels a day. There are so many job openings that the state is sponsoring trade fairs across the country and has to deal with—are you ready?—budget surpluses!

Comparisons between North Dakota and other states struggling with deficits and high unemployment abound. Steve Moore wrote about it in the Wall Street Journal, noting that North Dakota has a budget surplus of $1 billion out of a $3.5 billion budget and it has already cut income taxes and is considering further reductions. Complete funding for the state’s pension plan is accomplished every year and the state is building “infrastructure” projects: roads, bridges, railroads and pipelines.

Moore compares this to the issues facing California: five straight years of budget deficits with the current fiscal year’s shortfall expected to exceed

The latest report from the Calgary Herald (Alberta, Canada) was nothing but good news: The steadily declining production of light oil from 2002 to late 2010 has reversed itself completely and is now not only proving the power and principles of a free market but “will change the way we think about oil, with many weighty consequences…” says blogger Peter Tertzakian. The graph he provided here shows Alberta’s production declining by about 16,000 barrels per day (B/d) every year since 2002, dropping to just over 300,000 B/d in late 2010. Now, thanks to new capital, new technology, and new enthusiasm, production is close to 400,000 B/d. It also “could heighten the blood pressure of a few peak oil theorists,” said Tertzakian.

He refers to the theory first offered by M. King Hubbert in 1956 that claimed that oil production in the United States would reach its peak between 1965 and 1970 and begin to decline thereafter. It was based upon the assumption that the amount of oil reserves is fixed and that it is analogous, according to peak theory supporter Colin Campbell, to a glass of beer: “The glass starts full and ends empty, and the faster you drink it, the quicker it’s gone.”

From that theory, Hubbert then claimed that this would drastically alter life in the United States, predicting chaos, war, starvation, economic decline and possibly even the extinction of mankind.

As Daniel Yergin (Pulitzer Prize-winner for his book The Prize: The Epic Quest for Oil, Money and Power) noted in the Wall Street Journal, this prediction of the “end of the world as we know it” was one of many such predictions, each one of which never came true. “Hubbert’s Peak” moved from the 1970s to 2005 and then to 2011, and is now expected sometime before the year 2020. But it’s all based on one primary faulty assumption: that the

The Story Behind the Best- and Worst-Run States

In its second annual survey of the best- and worst-run states, 24/7 Wall St. noted some significant changes but the same message: “States can do a great deal to control their fate.”

Well-run states have a great deal in common with well-run corporations. Books are kept balanced. Investment is prudent. Debt is sustainable. Innovation is prized. Workers are well-chosen and well-trained. Executives, including elected and appointed officials, are retained based on merit and not politics.

Based on data collected from numerous sources such as Standard & Poor’s, the Bureau of Labor Statistics, the U.S. Census Bureau, and the Tax Foundation, 24/7 Wall St. then ranked each state on its performance in 10 categories. The study concluded that the best-run state was

The Wall Street Journal virtually called the Obama administration’s efforts to create “green” jobs a joke, decrying the President’s efforts to jump-start the economy with them as mere “conjuring” and suggesting instead that he drop his “ideological illusions” and face reality.

The reality is that no matter how much of other people’s money the President throws at the “clean” renewable alternative energy sector to force it to generate jobs, his efforts have been an abysmal failure. The name Solyndra is now synonymous with “loser” and the Washington Post reported last month that Obama’s green loan program of $38 billion has created just 3,500 jobs in two years instead of the 65,000 anticipated by the White House.

Instead, real jobs are being created in the real energy industry—in Pennsylvania, North Dakota, Texas, Louisiana, and Oklahoma. In the first six months of this year,