As political commentator for the Concerned Women for American’s Legislative Action Committee and former speechwriter for former President George H. W. Bush, Janice Shaw Crouse celebrated Ronald Reagan’s 100th birthday with a paean of praise for the former President‘s skills as “The Great Communicator” which perfectly illustrates the perception of Reagan as a good conservative, at least when he spoke.

Back in August of 2010, the Congressional Budget Office estimated the federal deficit for 2011 to be $1 trillion. On Thursday, after revising its assumptions, the CBO announced they missed the mark by $500 billion.  The deficit number has been revised upward to $1.5 trillion, and could bring the national debt to $20 trillion by 2021.

Despite being verbally abused and legislatively hamstrung ever since the start of the Obama administration, those CEOs arriving at the Blair House Wednesday for another Summit meeting with the President seemed in good spirits. In a pre-announcement, White House spokeswoman Jen Psaki, was all smiles:  “[This] working session is an opportunity for the president to continue building strong partnerships in the business community.” 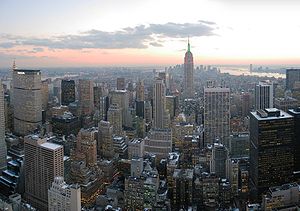 White House deficit commission co-chairman Alan Simpson spoke at a Christian Science Monitor roundtable on Friday morning saying, “I can’t wait for the blood bath in April. It won’t matter whether two of us [on the commission] have signed this or 14 or 18. When debt limit time comes, they’re going to look around and say, ‘What…do we do now? We’ve got guys [House freshmen] who will not approve the debt limit increase unless we give ’em a piece of meat, real meat, off of this package.’ And boy the blood bath will be extraordinary.”

When Anthony Mason, CBS News’ senior business correspondent, visited the Treasury Room, he called it the location of “essentially the American credit card machine.” It’s where traders buy and sell United States’ treasury bills, notes, and bonds in order to finance government operations. Mason’s revelation was profound: “I found that room kind of spooky. If we can’t [sell] those IOUs—which keep the government running on a day-to-day basis—then we can’t run the country anymore. We [won’t] have the money.”

CBS then went on to review the repetitive and increasingly tiresome litany of disasters that await if those IOUs can’t be sold:

The co-chairs of President Obama’s Deficit Commission, Erskine Bowles and Alan Simpson, announced many of the possible recommendations that could appear in the report of the Commission due December 1. They included just enough to arouse the ire of partisans on both sides, without making any serious inroads into real deficit reduction. Calling it a “politically provocative and economically ambitious package,” the New York Times said the initial proposals are “igniting a debate that is likely to grip the country for years.”

The co-chairs aren’t expecting much to happen but they claimed they wanted to “start the conversation” now.

Some of the proposals on the reduced spending side include:

Translating Bernanke-Speak About the Great Recession

When Fed Chairman Ben Bernanke says the country is in trouble, many aren’t listening, partly because the media wasn’t there reporting on it, and partly because those listening can’t understand what he’s saying. Speaking at the Annual Meeting of the Rhode Island Public Expenditure Council on Monday, the best he could do was “There is no way around it—meeting these challenges will require…the public to make some very difficult decisions and to accept some sacrifices.”

Fixing State Budgets will be Painful

Pew Research recently polled Americans about ways to bring state budgets into balance and found that respondents did not like any of the options. In its Congressional Connection poll released June 28, Pew Research asked if a federal bailout of financially troubled states should be considered. Barely one in four said yes. Nearly 60 percent said no, that the states should take care of their problems on their own.

When John Hussman, in his Weekly Market Comment, noted that the Economic Cycle Research Institute’s (ECRI) Index “has slumped to the lowest level in 44 weeks and has now gone to a negative reading,” he was confirming other recent signals that the economy was giving off, notably here and here, that the possibility of a double dip recession continues to increase.

The Wall Street Journal took another look at the $13 trillion national debt written about here last week and announced that, according to a study by economists Carmen Reinhart and Kenneth Rogoff, the economy has now reached the tipping point, the Reinhart-Rogoff Line, better known as the point of no return.

“Once a developed nation’s debt crosses it, its annual growth [tends to be much] lower.” The best estimate is that, once that point is reached, the GDP will be reduced by one-third, with little chance of regaining normal economic output for the foreseeable future.

In their book, This Time Is Different, Reinhart and Rogoff state:

When former Comptroller General Bill Walker, who headed the U.S. Government Accountability Office, said two years ago that the “official” debt of the United States “is only around $10 trillion,” he wryly suggested that since this number was produced by “government accounting, which…allows one to ignore Social Security, Medicare and the new prescription drug benefit [it was like] ignoring rent, food and utilities in your household budget [and] it will lead to a few bounced checks.” However, he added, “Our real debt is about ten times higher,” or about $100 trillion.

At the time this was a breath-taking number, but Walker was just repeating what Richard Fisher, President of the Dallas Federal Reserve, had said just a couple of months earlier.

Will the U.S. Be Able to Pay its Debts?

An Associated Press writer says “the crushing weight of its debt threatens to overwhelm everything the federal government does,” even under the best-case scenario. This theme of unsustainable debts and deep holes has been reviewed elsewhere on this site, and it’s small comfort that it is now making headlines in the controlled mainstream media: 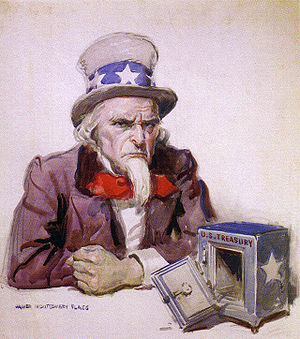