Democrats said Sunday that Mitt Romney, by picking Rep. Paul Ryan to fill out his presidential ticket, has set up this year’s election as a referendum on the deep cuts to the social safety net that the GOP’s top budget man says are needed to fix federal finances. 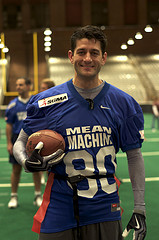 There are so many flaws and logical inconsistencies in this opening paragraph that I scarcely know where to begin! “Deep cuts?” What exactly is being cut? As I remember it, Paul Ryan’s plan was to let the states take more of a role in handling the financing of Medicare.

Paul Ryan’s plan is just “nibbling at the edges” of the massive yawning federal deficit. Remember that fedgov is only collecting about 60 percent of what it is spending, and borrowing the rest. And nearly all that phony borrowing is by the Fed, to cover up the fact that international investors (i.e., Japan and China) already have more US government debt than they want.

The other flaw is that the American people really care of the matter at all. I don’t think so: as long as the checks keep coming, what’s to worry? But the Romney campaign wants to take the “moral high ground” in the debate:

“We’re making a bet that Americans are more interested in a campaign that’s waged on real ideas, including entitlement reform, and that a campaign, a substantive campaign, conducted on the high ground, is going to trump the type of petty, negative politics that we’re hearing from Barack Obama,” Eric Fehrnstrom, a Romney campaign senior adviser, said on CBS‘ “Face the Nation.”

That isn’t likely. At least it doesn’t ring my chimes.

And I can’t leave without mentioning that Paul Ryan is no conservative—not in my book. He’s the one who, you remember, voted for the Patriot Act and Bush’s prescription drug plan—the one that promised benefits without bothering with the niceties of how to pay for it. To have him now suggest ways to pay for his profligacy is just a little too much for me. Sorry.