This article was published by The McAlvany Intelligence Advisor on Wednesday, September 13, 2017:

This article appeared online at TheNewAmerican.com on Tuesday, September 12, 2017:

Kentucky Republican Representative Thomas Massie is just the latest in an increasingly large number of supporters of Roy Moore, giving him his strong endorsement on Tuesday. Said Massie, “Roy Moore has more political spine than anyone I know,” adding:

This article appeared online at TheNewAmerican.com on Saturday, December 10, 2016:

Congressman Sam Johnson (R-Texas), chairman of the House Ways and Means Social Security subcommittee, presented his plan, the “Social Security Reform Act,” on Thursday, which he called “a plan to permanently save Social Security.”

According to Michael Linden, an associate director at the liberal Center for American Progress, the cuts to benefits would be severe — between 11 percent and 35 percent — and they would include those already receiving Social Security benefits. Social Security actuaries who analyzed Johnson’s plan (at his request) came up with different numbers: Cuts would range from 17 percent to 43 percent but over a longer time period and with the same conclusion: everyone in Social Security (with the exception of the lowest-income participants) would take a hit under Johnson’s plan.

Nowhere in Johnson’s plan is any mention of privatizing the program, which is surprising, as it was a topic of discussion during the Republican presidential debates. Rand Paul, Mike Huckabee, Rick Perry, and Ted Cruz all expressed their support for privatizing Social Security as the best way to solve its myriad problems.

Here are some of those problems:

This article appeared online at TheNewAmerican.com on Monday, July 20, 2015:

Since the shooting of military personnel at a recruiting center in Chattanooga last week, governors in half-a-dozen states have ordered members of their National Guard to arm themselves. Florida Governor Rick Scott went a step further, ordering the closing of six storefront locations and moving them into armories.

In addition to Florida, governors in

The Black Robe Regiment is Spreading its Wings

This article first appeared at The McAlvany Intelligence Advisor on Wednesday, November 5, 2014:

The Black Robe Regiment is enjoying a welcome revival, thanks to IRS waffling and dithering. Its initial iteration dates back to 1776 when Reverend John Peter Muhlenberg concluded his Sunday sermon with this:

In the language of the Holy Writ, there was a time for all things: a time to preach and a time to pray. But those times have passed away.

There is a time to fight and that time is now coming!

He then threw off his black robe revealing a full military uniform and marched to the back of his church where he demanded: “Who among you is with me?” 300 men from his congregation stood up and joined Muhlenberg that day.

The “regiment” of patriot-pastors grew to the point during the Revolutionary War that British Prime Minister Horace Walpole remarked: “Cousin America has run off with a Presbyterian parson!”

It’s been three weeks since the much ballyhooed start of enrollment for Obamacare and the results are not just disappointing. They are disastrously low. According to Mike Huckabee, fewer than 500,000 of the 7 million uninsured people needed in the next six months to make this program viable have been able to apply for coverage online, and most of them were 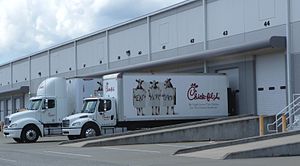 At the invitation by Mike Huckabee on his Facebook page to his fans to “take a stand for the Godly values we espouse by simply showing up and eating at Chick-fil-A on Wednesday, August 1st,” nearly a million people responded back to him. So many responded, in fact, that his Facebook page “disappeared” for several hours before coming back online.

The controversy began when Dan Cathy, president of the fast food franchise, responded to a question about homosexuality in a small newspaper, The Baptist Press, early last month. Cathy then expanded on his remarks in an interview on The Ken Coleman Show on July 18th:

I think we are inviting God’s judgment on our nation when we shake our fist at Him and say, “We know better than you as to what constitutes a marriage.” I pray God’s mercy on our generation that has such a prideful, arrogant attitude to think that we have the audacity to define what marriage is…

We want to do anything we possibly can to strengthen families. We are very much committed to that.

He concluded by saying, “We know that it might not be popular with everyone, but thank the Lord, we live in a country where we can share our values and operate on Biblical principles.”

Not everyone is interested in sharing those values. First came former Obama chief of staff and now mayor of Chicago, Rahm Emanuel, who said