A Lesson in Free Market Economics – from Venezuela?

This article was published by The McAlvany Intelligence Advisor on Monday, August 15, 2016:

Over the weekend, some 54,000 Venezuelan citizens living near the country’s border with Colombia poured over the Simon Bolivar Bridge so they could buy toilet paper, cosmetics, vitamins, and tires. Many brought empty suitcases, others brought packets of the nearly worthless Venezuelan bolivar currency, still others brought gold earrings, necklaces, and other personal valuables to exchange in local pawn shops for Colombian currency so they could spend it.

They were there to buy. And the merchants were ready to sell. As they exited the bridge on foot (cars won’t be allowed for at least another month) they were greeted with friendly Colombians

The recent attempt to terminate both the ethanol subsidies of $.45 a gallon and the $.54-per-gallon import tariff on Brazilian sugar-based ethanol by the Senate failed because it was an amendment attached to a bill that was doomed to failure anyway. Both will cease on December 31 automatically, ending 33 years of subsidizing the ethanol industry; however, food prices are likely to stay high anyway. The main reason is neither the subsidy nor the tariff, but the mandate by the government requiring 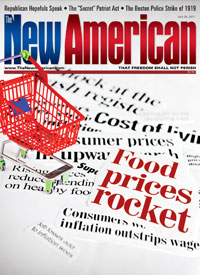 Beginning of the End for Ethanol Subsidies

On Thursday the United States Senate voted to end the 45 cents-per-gallon subsidy currently supporting the ethanol industry. The bill, offered by liberal Senator Dianne Feinstein (D-Calif.) and conservative Senator Tom Coburn (R-Okla.), was passed overwhelmingly, 73-27. Said Feinstein, “We’ve got to change the way we carry out business. This is going to be the first of many coming down the line. We might as well get used to it now.”

Opposition to ethanol subsidies has been building for years, but the green lobby has successfully overcome all attempts to repeal them, until now. Starting out as a