This article appeared online at TheNewAmerican.com on Wednesday, August 2, 2017:

Treasury Secretary Steve Mnuchin warned Congress in a letter sent Friday that they had precious little time to raise the federal government’s debt ceiling before his department ran out of money. He even put a date on when that would happen if the ceiling wasn’t raised: “Based upon our available information, I believe that it is critical that Congress act to increase the nation’s borrowing authority by September 29.”

Treasury Secretary Steven Mnuchin sent an early-warning signal to House Speaker Paul Ryan (R-Wis.) on Wednesday that “on Thursday, March 16, 2017, the outstanding debt of the United States will be at the statutory limit.” He added: 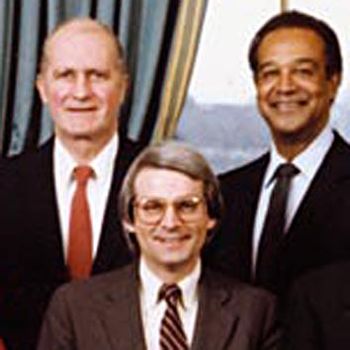 David Stockman, former President Ronald Reagan’s director of his Office of Management and Budget from 1981 to 1985, told Greg Hunter of USAWatchdog that March 15, two days after President Trump presents his budget to Congress, will be a “hard stop” for the economy:

How the Establishment Does Business in Washington

This article was published at The McAlvany Intelligence Advisor on Wednesday, October 28, 2015:

Just a visit between old friends

In Washington, it is said that laws are like sausages: no one wants to know exactly how they are made. Washington, controlled as it has been by the Establishment for decades, makes laws like sausages, keeping everyone in the dark and happy, except the taxpayer.

Just who is this ephemeral, invisible, ever-present establishment? In three minutes, a caller to Rush Limbaugh’s radio show on September 15, nailed it:

This article appeared online at TheNewAmerican.com on Tuesday, October 27, 2015:

After working privately over the past several weeks with members of the White House staff, as well as with Nancy Pelosi (D-Calif.), Mitch McConnell (R-Ky.), and Harry Reid (D-Nev.), House Speaker John Boehner succeeded late Monday night in cobbling together a deal that gives everyone in Washington what they want but leaves the bill for the taxpayer. By the time the dust settles, the deal will cause the country’s national debt to reach $20 trillion within the next 18 months, if not sooner.

This article appeared online at TheNewAmerican.com on Friday, October 16, 2015:

On Thursday the Treasury Department announced that the federal deficit for the 2015 fiscal year, which ended September 30, fell to an eight-year low — $439 billion — thanks to tax revenues that grew at a rate faster than government spending. Revenues, according to the department, grew by eight percent over last year while government spending grew by five percent.

Obama Goes on Offense, Wants to Spend Even More

This first appeared at The McAlvany Intelligence Advisor on Monday, February 2, 2015: Taking a page not only out of the Super Bowl on Sunday, but also out of the statistical study proving that offense is more effective in winning than defense, Obama is offering a grievously offensive and logically indefensible budget for 2016 today (Monday, 2/2/15). His proposal is morally offensive in that he proposes to take money earned by some and give it to others. It is logically flawed in that it will increase deficits each year for the next ten years, adding yet another $6 trillion to the $18 trillion already extant (up from the $10 trillion when he took office in 2008). It will limit job growth, stifle innovation, keep tax lawyers and accountants busy into eternity, and do nothing for his favorite target: the beleaguered middle class.

None of that matters. It’s all for show and to keep the Republicans on the defensive by couching his proposal in terms that only progressives could love:

This article first appeared online at TheNewAmerican.com on Monday, February 2, 2015:

On the day after Super Bowl Sunday, President Obama, knowing that an offensive strategy most likely wins the game while a purely defensive strategy guarantees losing it, is challenging the new Republican-controlled Congress with his offensive 2016 budget proposal starting October 1. He is daring them to play defense without appearing to favor the ultra-rich, so-called trust-fund babies, and corporations parking billions in earnings abroad to avoid high rates of corporate taxation here.

Besides, in a preview of this strategy on Saturday during his radio address, the president said he thinks

Following Tuesday’s passage of a “clean” debt ceiling bill in the House of Representatives, the Senate approved it on Wednesday and sent it on to the president who is expected to sign it without delay. The bill allows the president unlimited spending authority until well after the November elections so that Republicans can focus instead on the failings of Obamacare to leverage their chances in that election. It also neatly

There is no Debt Ceiling in place under the new Law

A closer look at what actually passed late Wednesday night reveals that the limit on the national debt wasn’t raised, it was eliminated altogether, at least until February 7th. What actually happened is that

Lessons from the Republican Loss

This article first appeared at the McAlvany Intelligence Advisor on Friday, October 18th, 2013:

The liberal media could scarcely contain themselves over the Democrat win and Republican loss regarding the budget battle, the debt ceiling, Obamacare, and government spending. The capitulation by the establishment Republicans was stunning. As expected.

The vote to preserve the status quo in the Senate was bad enough (81-18) but the collapse in the House made the earth move:

This article first appeared at The New American online on Wednesday, October 16th, 2013:

Despite mounting evidence that the government will have more than enough money to pay its essential bills and that the real national debt is $70 trillion, not $17 trillion, and despite pressure from Tea Partiers and constitutionalists to resist, House Speaker John Boehner is likely to bring the Senate bill to a vote in the House where, if House Minority Leader Nancy Pelosi is right, it will

Within hours of the “brinkmanship” press release by the U.S. Department of the Treasury, major media began to repeat the highly dubious risks outlined by the department without reading carefully exactly what it contained. The headline and opening paragraph were all that the echo chambers needed:

Belgian Government Shutdown a Lesson for the US?

This article was first published by The McAlvany Intelligence Advisor on Friday, October 4th, 2013:

With all the noise and rhetoric over the awful, catastrophic, world-ending US government shutdown, little has been said about the Clinton shutdown and nothing at all about the 589 days Belgium went without a national government in 2010 and 2011.

There’s no chance that the present US “shutdown” will threaten that record.

Belgium is a quirky little country with just 11 million people. Its government, when it has one, is a combination of

This article first appeared at The McAlvany Intelligence Advisor on Monday, September 30th, 2013:

For years, both the Cato Institute and the Heritage Foundation have published studies purporting to measure just how much freedom countries around the world enjoy, based on a number of indices. Heritage tracks how closely countries hew to the rule of law, how they apply principles of limited government, how onerous the regulatory state is, and how extensively open and free markets are embraced.

Cato, on the other hand, looks at how much personal choice each country’s citizens enjoy, how free they are to engage in voluntary exchange, and how secure their rights in private property are.

Both have recently published their results for 2013, based on the latest available data. The news isn’t good. In some cases, it is

A vote on a bill to continue government spending offered by House Majority Leader Eric Cantor (R-Va.) scheduled for Thursday was abruptly cancelled when it was clear that it would fail. Called a “trick” by some Tea Party conservatives, “hocus-pocus” by Rep. Jason Chaffetz (R-Utah), and “chicanery” by Sen. Ted Cruz (R-Texas), Cantor’s bill clearly wouldn’t draw the 218 votes necessary for passage. Especially since some 80 House members have signed a letter drafted by Rep. Mark Meadows (R-N.C.) demanding that