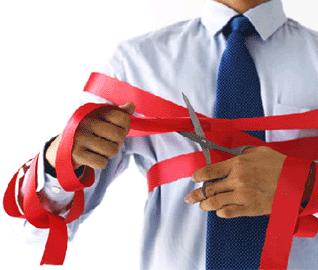 Cass Sunstein, the head of one of those regulatory agencies, the Office of Information and Regulatory Affairs—the “regulator of the regulators” so to speak—touted some of the burdens that allegedly have already

After months of discussion between and among 1,800 contributors to Wikipedia, the online information source, it decided to “go black” on Wednesday to protest the dangers in two bills that threaten the freedom of the Internet. Many other websites are also participating in today’s protest.

The bills are the Stop Online Piracy Act (SOPA) and the Protect Intellectual Property Act (PIPA).

According to Wikipedia, the proposed legislation would put “the burden on website owners to police user-contributed material and call for the unnecessary blocking of entire sites. Small sites won’t have sufficient resources to defend themselves. Big media companies may seek to cut off funding sources for their foreign competitors even if copyright isn’t being infringed. Foreign sites will be blacklisted which means they won’t show up in major search engines. And SOPA and PIPA build a framework for future restrictions and suppression.”

Ostensibly to reduce piracy, the bills overreach greatly. A single perceived violation, for instance, could get an entire website shut down or starved to death through forced cessation of payment processing or delivery of advertising to the website. How this might work if the bills become law is expalained by

The bill was offered back in October by Smith along with 12 cosponsors, including Bob Goodlatte (R-Va.) who stated:

Intellectual property is one of America’s chief job creators and competitive advantages in the global marketplace, yet American inventors, authors, and entrepreneurs have been forced to stand by and watch as their works are stolen by foreign infringers beyond the reach of current U.S. laws. This legislation will update the laws to ensure that the economic incentives our Framers enshrined in the Constitution over 220 years ago—to encourage new writings, research, products and services—remain effective in the 21st century’s global marketplace, which will create more American jobs. The bill will also protect consumers from dangerous counterfeit products, such as fake drugs, automobile parts and infant formula.

The bill represents a modification of the Senate bill, the PROTECT IP Act, which was reported out of committee last spring but hasn’t yet reached the floor of the Senate for debate.

Supporters and opposition are rapidly lining up, pitting Hollywood’s producers against the Internet content providers, or, as Politico.com called it, the

On Thursday, Bank of America announced that, starting the first of the year, they would be charging debit card users $5 a month for the privilege as a way to recoup lost income under new rules from the Federal Reserve. The rules, which took effect on Saturday, October 1, limit the amount banks may charge merchants accepting debit cards to 21 cents per transaction, down from 44 cents previously. Under the Dodd-Frank bill passed in 2010—initially proposed by former Senator Chris Dodd (D-Conn.) and Representative Barney Frank (D-Mass.)—banks processing the transactions will see their income from those fees drop by about $10 billion a year, all in the name of fairness and equity, according to the Federal Reserve, which determined that the new fees are “reasonable and proportional.” According to industry sources, the real cost of handling each debit card transaction amounts to “a penny or two,” and so politicians decided