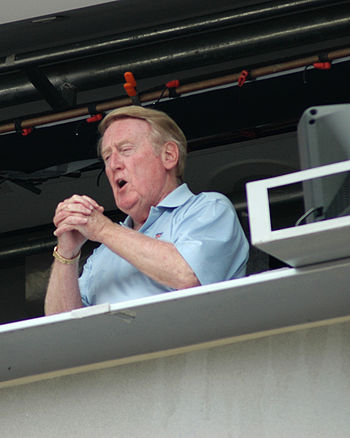 This article appeared online at TheNewAmerican.com on Tuesday, November 7, 2017: 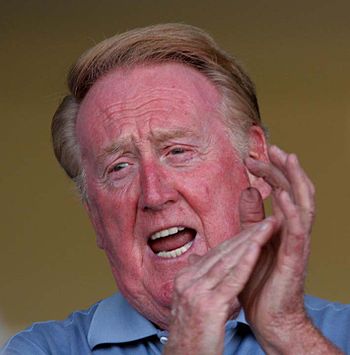 Last week, former sportcaster Vin Scully expressed his disgust with NFL players kneeling — aka, the “anthem protests” — by making his final announcement: “I will never watch another NFL game again.” Added Scully, “I am so disappointed.… I used to love, during the fall and winter, to watch the NFL on Sunday…. I was in the Navy.… I have overwhelming respect and admiration for anyone who puts on a uniform and goes to war.”

Scully, the voice of the Brooklyn Dodgers and then the Los Angeles Dodgers for an astonishing 67 seasons, was best known for his introduction to Dodger baseball:

Democrat Shamelessly Calls for Gun Control, Rather Than Having Concern for Wounded GOP Colleagues

This article appeared online at TheNewAmerican.com on Wednesday, June 14, 2017:

Congressional Democrats who were practicing for Thursday night’s game with Republicans near the field where House Majority Whip Steve Scalise was shot gathered to pray for their colleagues. A photo posted on social media by Representative Ruben Kihuen (D-Nev.) shows about 25 of them huddled together in their dugout with their heads bowed. Kihuen posted this comment along with the photo: “Me [sic] and my House Democrat colleagues saying a prayer for our House Republicans and Senate GOP baseball colleagues after hearing about this morning’s horrific shooting at their practice field.”

The alleged shooter, James T. Hodgkinson, of Belleville, Illinois, somehow obtained a semi-automatic rifle (Illinois has some of the country’s strictest gun control laws in place) and then somehow managed to ship it to Arlington, Virginia, also home to anti-gun politicians who have enacted almost equally draconian laws. There is little doubt that the shooter, now deceased (thanks to the intervention of an armed law-enforcement officer), was

On December 4, Watch for an Epic “Suicide Squeeze” by OPEC

In baseball terminology, a “suicide squeeze” is a play in which the runner on third base breaks for home plate on the pitch, counting on the batter to lay down a bunt. If he doesn’t, the runner is an easy out.

On December 4th, at the regular annual meeting of the thirteen members of the OPEC cartel, the “suicide squeeze” will be in play. And they will find, to their chagrin, that the batter didn’t cooperate.

A year ago Saudi Arabia, the head of OPEC, made a fateful decision,

This article appeared online at TheNewAmerican.com on Monday, July 27, 2015:

At the end of the soccer game between Cuba and Guatemala at the Pan Am Games in Toronto last week, star midfielder Ariel Martínez  began weeping in the middle of the field. Many felt that he should have been celebrating, since Cuba bested Guatemala in the contest 1-0.

But Martínez was crying because he had made his decision to defect to the United States, and would be leaving everything he had known behind: family, friends, teammates, and ties to his country. But the opportunity to pursue his dream overcame them all:

Nine-year-old Girl Accidentally Shoots Instructor: Should Our Freedoms Be Casualties, Too?

This article first was published at TheNewAmerican.com on Friday, August 29, 2014:

Must every tragic and unusual gun death be accompanied by irrational calls for more government intrusion into our lives? Virtually all of us have heard about Arizona firearms instructor Charles Vacca, who was accidentally shot and killed Monday at the Last Stop gun range by a nine-year-old girl he was teaching to shoot a fully automatic Uzi. The incident was caught on video and, not surprisingly, has caught the nation’s attention. Unfortunately, though, it’s reason and reality that are caught in the crosshairs.

Many Internet commenters have seized the opportunity to place blame for this unfortunate accident on who they call “gun nuts”: But someone – anonymously – complained that

This article was first published at The McAlvany Intelligence Advisor on June 26th, 2013:

When Joe Carr, along with five of his baseball buddies from Eden Prairie, Minnesota, decided to fly to Washington to watch their Twins take on the Washington Nationals in June, he had no idea he’d leave the city with a criminal record and $50 poorer.

In a sarcastic jest he decided to write about his experience in a letter to the editor of the Washington Post, and they printed it. He explains what happened:

The Friday, June 7, night tilt between the Nationals and my Mighty Fighting Minnesota Twins was rained out by Tropical Storm Andrea. I was hosting five of my buddies on our annual baseball weekend, and, having lived in the D.C. area in the ’90s, I had booked the hotel, purchased the game tickets and planned the requisite Mall and monument tours. We were going to drop some serious cash (well, by Midwestern standards, anyway) into the local economy.

The rainout resulted in my possessing six tickets — worth $360 — to the second game of a Sunday doubleheader scheduled to be played when my friends and I would be somewhere over Chicago. However, as any baseball fan knows, there is always a market for club-level seats. So I proceeded to “market” the seats as I walked up to Nationals Park prior to Saturday’s 4:05 p.m. game.

Fast forward: after offering his tickets (he was willing to let them go for less than the $60 he had invested in each of them) to several people who turned him down, he was accosted by a uniformed member of the local constabulary, along with a trainee who was about to get a lesson in how to shake down a visitor. Here’s the conversation:

Officer: What are you asking? [Note: this is a solicitation.]

Officer: You’re under arrest for solicitation.

Trainee: You’re going to do this?

Carr:  You’ve got to be kidding.

Officer:  Does it look like I’m kidding? [Is this intimidation?]

The OIC (officer large and in charge) called for backup, put Carr into the back seat of the cruiser when it arrived, sans belt and shoes but wearing handcuffs, took him “downtown” for a mug shot, fingerprinting, and cool-off time in a jail cell for 2½ hours. The judge showed up, fined him $50, and let him go, leaving behind a criminal record.

As Mark Perry noted, Joe never actually sold his tickets. He ate the $360. There wasn’t even a transaction. There was no victim. He wasn’t charged with scalping either, just solicitation.

Carr described his experience into Washington’s welcome chamber of “downtown” as “Kafka-esque” where everything is upside down and inside out:

I broke a law. Guilty. But what purpose was served by my arrest? It didn’t make any financial sense. I am certain that the costs of my arrest, transport and processing had to be many multiples of the $50 I paid. Does the District have a massive budget surplus it needs to spend down?

What Carr ran into was the war on the free market, in a microscopic moment. Carr bought his tickets. He owned them. He paid for them. They were his property. Under free market principles he would be free to use them (or not), give them away, will them to his heirs, or sell them (at any price that a willing fully informed buyer would pay). But not in Washington, DC. Their definition of “solicitation” is different.

In the United States, there are three parts to the crime of solicitation:

You can see where this is going. Apparently, in Washington, DC, attending a baseball game with tickets purchased from another person is a “substantive crime.” Looking at the Washington National’s record to date, attending any of their games is a crime – of boredom.