A Hero Emerges from the Horror of the Las Vegas Shootings In the media’s haste to cover a story that appeared initially to mesh with its anti-gun agenda, at least two covering the ghastly murderous attacks in Las Vegas on Sunday skipped over the real hero: Joseph Robert Wilcox.

USA Today’s initial reporting of the incident only made passing reference to the man who likely cut short what was planned to be a massive attack on innocents, referring to Wilcox as just “another man” who was shot in the Walmart melee. But the paper gave Senate Majority Leader Harry Reid, the senior Senator from Nevada, plenty of ink: 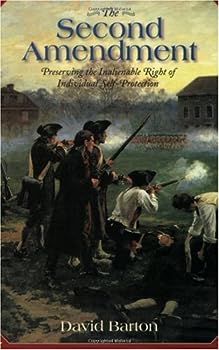 Cover of The Second Amendment

For seven years Theodore Roosevelt Liberti – known to his friends as “T.R.” – ran a retail gun shop in New Jersey and then moved it to Florida. T.R.’s bank had always been BankUnited (BU) which handled his accounts and cleared his customer’s credit card purchases. But when he decided to open an online store called Discount Ammo-N-Guns, BankUnited closed his accounts on March 12 “pursuant to the terms and conditions listed in our Depositor’s Agreement.”

I was very angry. They were very inconsiderate. We had all our credit cards going through that bank.

All of a sudden we had to run and find another bank to keep our business going. We [had to] shut down for two weeks.

[BUT] wouldn’t even tell us why.

When the bank finally responded, its explanation was unsatisfactory:

In a move that surprised nearly everyone who knew him, California State Senator Leland Yee was arrested by the FBI on Wednesday on felony charges ranging from gun trafficking to soliciting illegal campaign contributions in exchange for political favors. At about the time he was released on a $500,000 bond the State Senate’s President pro Tem Darrell Steinberg called for Yee to resign or else be suspended. Steinberg also

Following Sturm, Ruger’s announcement last month that it would no longer be selling its semi-automatic handguns to California residents because of the state’s new microstamping law, Smith & Wesson announced on Wednesday, January 22, that it was following suit. From its press release, the company said:

Just when some of its customers were beginning to question the company’s sincerity about moving out of Colorado in response to anti-gun legislation passed last summer, Magpul Industries announced it has finalized its moves to

After nearly four years of delays, the military trial of Nidal Malik Hasan, the accused Fort Hood Shooter, begins today with Hasan representing himself against charges of 13 counts of premeditated murder and another 32 counts of attempted murder stemming from the attack on November 5th, 2009.

The costs, estimated to be $5 million and counting, are compounded by the

In January, following the Sandy Hook Elementary School massacre, President Obama issued a “Presidential Memorandum directing the Centers for Disease Control to research the causes and prevention of gun violence” along with 22 other “initiatives.” That study, subcontracted out to the Institute of Medicine and National Research Council, was completed in June and contained some surprises for the president who

Dogs attack child. What would you do?

In a microcosm this true story brings together the conflicting forces at work in our society today.

Let’s assume that you are at home, minding your own business, when all of a sudden you hear the shrieking of someone being attacked by dogs on the sidewalk in front of your home. What would you do? Would you ignore the screaming and turn up the volume on the TV? Or close the door? Would you jump into the middle of the fray?

From the Boston Times

BOSTON – National Guard units seeking to  confiscate a cache of recently banned assault weapons were ambushed on April 19th by elements of a para-military extremist faction. Military and law enforcement sources estimate that 72 were killed and more than 200 injured before government forces were compelled to withdraw.

Speaking  after the clash Massachusetts Governor Thomas Gage declared that

At a hearing at the House of Representatives on Thursday a spokesman for the Department of Homeland Security (DHS) did his best to defuse growing concerns about excessive purchases of ammunition for its 72,000 agents. These purchases were needed, said Nick Nayak, because of

Shayne Heap is the sheriff of Elbert County, Colorado, one of 62 sheriffs who weren’t invited to serve as a backdrop for President Obama’s latest trip to Denver to push for his gun controls. Instead, Heap took the opportunity to vent his spleen at Obama’s hypocrisy and it’s a wonderful thing to watch.

He said “it’s too bad these tragic events have only served to be a launching point for political agendas and grand standing … to make laws that are constitutionally questionable and punitive to law-abiding citizens, who’ve done nothing wrong, borders on legislative abuse.”

He added that Obama left Washington, DC, which enjoys the highest murder rate per capita in the country in order to tell Colorado how to

At noon on Thursday Connecticut Governor Dannel Malloy signed into law a wide-ranging bill in response to last year’s shooting at the Sandy Hook Elementary School in Newtown, Connecticut.  After weeks of closed-door negotiations between Republican and Democrat leaders and another 13 hours of debate on Wednesday, the 139-page bill was passed by the House, 105-44. It had previously passed the Senate, 26-10.

Georgia Town Requires Every Homeowner to Own a Gun

On Monday evening, the town council in Nelson, Georgia, located about 50 miles north of Atlanta, passed its Family Protection Ordinance requiring the head of every household to own a gun and the ammunition to feed it. It exempts felons and those with certain disabilities and it comes without penalties for noncompliance. It was passed to make a statement