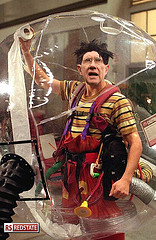 According to the Washington Times, Senate Majority Leader Harry Reid is threatening to create the gridlock that many fear will push the country over the fiscal cliff. He refuses to recognize reality, continuing to make statements that most people consider absurd and ill-informed:

“Social Security is not part of the problem, That’s one of the myths the  Republicans have tried to create,” he said. “Social Security is sound for the  next many years. But we want to make sure that in the outer years people are  protected also, but it’s not going to be part of the budget talks, as far as I’m  concerned.”

This is the immovable object: Social Security is fine, just fine, leave it alone, we must protect the seniors, we promised…, etc., etc., etc. But Senate Minority Leader Mitch McConnell isn’t buying any of it. He is the irresistible force – he has

The Inevitable Tax Increase No One Is Talking About

There’s zero likelihood that this tax increase will be stopped. No one wants to talk about it. It has been avoided in the debates like the plague. No politician who I know of has mentioned it. It has public support from those who are dependent on it. Resistance is futile.

It’s the Social Security payroll tax increase that happens on January 1st – the end of the two-year “tax holiday” that was designed to give relief and stimulate the economy. It didn’t and it hasn’t and so it will come:

A temporary reduction in Social Security payroll taxes is due to expire at the end of the year and hardly anyone in Washington is pushing to extend it. Neither Obama nor Romney has proposed an extension, and it probably wouldn’t get through Congress anyway, with lawmakers in both parties down on the idea.

Those representing the recipients support the increase, naturally:

They are backed by powerful advocates for seniors, including AARP, who adamantly oppose any extension.

My dad referred to the AARP as “the old folks’ labor union.”  It sells insurance to its members. In 2008 it received $650 million in royalties and another $120 million in advertising from various insurance companies who sell Medicare supplements and long-term care plans to its members. Its membership is 40 million. Its political clout is

Rep. David Reichert (R-Wash.) along with two other House members has asked the Internal Revenue Service to investigate the American Association of Retired Persons (AARP) for acting more like a profit-making insurance company rather than a tax-exempt advocate for senior citizens. The AARP’s close control and micro-marketing management of companies it allows to use its brand amounts to profit-making activity that should be taxable, assert the lawmakers and others. But for years the AARP has largely successfully defended its non-profit status all the while growing into the seventh largest insurance company in the country.

Reichert, a member of the House Ways and Means Committee, told Fox News: “They’re really trying to manage these companies to increase their revenues.” And they have succeeded greatly. During the recession, when many of its members were struggling financially, AARP’s revenues just from its affiliation with United HealthCare alone jumped from $284 million in 2007 to $427 million in 2009 and $670 million in 2010. But because of their tax-exempt status, little of this is subject to income tax.

A tax lawyer favorable to the AARP, Bill Josephson, played innocent before looking into the situation, claiming that the organization was just receiving royalties or passive income, a common tax loophole for non-profits to use to shelter income from the IRS.  He said, “[This] is the classic royalty situation where the Sierra Club [for example] in effect simply makes its mailing lists available to other charities in return for royalty [payments]. I don’t have a problem with that, nor does anybody else.”

But Reichert, in his letter to the IRS, notes a big difference between the Sierra Club and the AARP. The AARP has virtual

Social Security: No COLA for You

When the Social Security Administration announced that there would be no cost-of-living-adjustment for 2011, Betty Dizik, Claire E., John Walker, Nancy Pelosi, and the AARP all agreed it would be difficult for the 58 million beneficiaries currently receiving checks. Betty’s only source of income is her $1,200 monthly payment from Social Security. At age 83, she exclaimed, “I’m like a lot of other people in my predicament who live on Social Security. It’s hard. We cannot make ends meet.”