This article appeared online at TheNewAmerican.com on Friday, April 6, 2018: 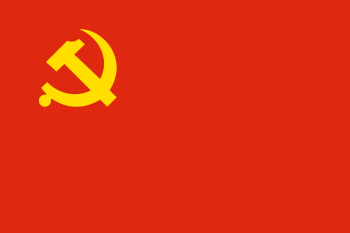 Flag of the Chinese Communist Party

In the nascent “trade war” between the United States and China, there is one option the Communist Chinese government isn’t considering using: its current stash of $1.1 trillion of U.S. Treasuries. Trevor Hunnicutt, writing for Reuters, said that, for the moment at least, “Chinese officials are holding back on taking aim at their largest American import: [U.S.] government debt.”

Hunnicutt posited that, if the Chinese did unleash what he called their “nuclear option,” it would devastate the American economy by forcing interest rates much higher and increasing the U.S. Treasury Department’s costs of financing its trillions in debt.

He also noted that, once liquidated, those assets would no longer serve as a threat to the United States, having already been expended. As Jeffrey Gundlach — known as Wall Street’s Bond King — said, “It is more effective as a threat. If they sell, they have no [more] threat.”

In his typically brash negotiating style, President Trump opened the bidding in March by slapping tariffs on $50 billion worth of Chinese imports of steel and aluminum. Almost immediately, China countered with its own opening bid, threatening to place tariffs on American imports into its country.

U.S. Trade Representative Robert Lighthizer, acting as Trump’s partner in the negotiating strategy, called China’s response “unfair retaliation” and upped the ante further by “considering” tariffs on additional Chinese imports. The Chinese then responded in kind, with a statement from the government-controlled Commerce Ministry: “The Chinese side will follow suit to the end [and] not hesitate to pay any price, resolutely counterattack and take new comprehensive measures in response.”

This is part of the game — rather like a game of Contract Bridge but with far higher consequences — according to Lighthizer: “The United States is … prepared to have discussions in further support of our commitment to achieving free, fair and reciprocal trade.” Larry Kudlow told Fox Business Network’s Stuart Varney on Friday that those discussions  are not only already under way, but have been under way for some time.

The mainstream media gives only a passing glance at the perceived injustices the president is trying to correct: the U.S. massive trade deficit with China. In 2017, the United States imported $505 billion worth of goods from China, while China imported just $130 billion worth of goods from the United States, leaving a “deficit” of $375 billion. Under normal circumstances this isn’t a concern, as the trade imbalance is usually offset by the exchange of dollars for yuan.

But if the trading partner is an enemy, that trade deficit, and those American dollars, can become a hammer. Indeed, China has been using this “hammer” against the United States for years.

Harry Kazianis, a Director of Defense Studies at the Center for the National Interest and part of Senator Ted Cruz’s foreign policy team during his 2016 presidential campaign, has long declared that China is an enemy of the United States, and has been since the early 1980s. That’s why, wrote Kazianis back in March when Trump launched his first bid to get China to the negotiating table to talk about trade policy, “the move is justified and long overdue.” Kazianis justified Trump’s actions by outlining all that the Communist Chinese regime has been doing to undermine the United States:

Industry subsidies: “China’s domestic industry subsidy program is called ‘Made in China 2025.’ Beijing has set aside hundreds of billions of [American] dollars … to dominate and subsidize growing industries like robotics, bio-pharmaceuticals, artificial intelligence [and] electric cars.… China wants to [control] around 80 percent of its domestic market in just eight years — something not allowed according to World Trade Organization (WTO) regulations — and wants to be a major player in trade around the world.”

Military weaponry: “Beijing has embarked on a campaign to steal many of the most classified and lethal weapons systems the U.S. has ever produced … including the Patriot missile, the THAAD Missile Defense System, the F/A 18 Fighter, the V-22 Osprey, the new Littoral Combat Ship and many more.”

Added Kazianis: “With Beijing building armed forces that could defeat the U.S. in battle, the motivations for such theft is clear.”

The Communist Chinese government is also engaged in breaches of U.S. national security, including its theft of vital personal security information of some 21 million Americans from the federal government’s Office of Personnel Management. The damage inflicted with this breach is enormous, said Kazianis:

The scale and scope of this cybertheft — more like cyberattack — should not be understated. These hackers stole countless pieces of personal information. This included detailed security clearance data and fingerprint information. This stolen material likely included the all-important SF-86 form, which is used for conducting federal employee background checks.

As a report from Wired explained, these forms can hold “a wealth of sensitive data not only about workers seeking security clearance, but also about their friends, spouses and other family members. They can also include potentially sensitive information about the applicant’s interactions with foreign nationals — information that could be used against those nationals in their own country.”

Military dominance: China is building islands in the South China Sea and is pushing Japan out of the East China Sea. Wrote Kazianis, “Beijing’s massive military build-up — including the deployment of new aircraft carriers, a massive missile force as well as [a] modernized army — is all part of this plan.”

On Thursday, when President Trump tweeted that “We are not in a trade war with China, that war was lost many years ago,” he got most of it right, adding that the war that the United States lost was caused “by the foolish, or incompetent, people who represented the U.S.”

The president should have included “evil,” as the machinations of the Chinese government are now making crystal clear. By using American dollars, Communist China has for decades been waging economic, political, and military war against the United States. Trump is correct in adding in his tweet: “We cannot let this continue!”

China communist consequences Deficit Foreign Policy response Theft threat trading War
This entry was posted on Saturday, April 7th, 2018 at 5:36 am and is filed under Foreign Policy, History. You can follow any responses to this entry through the RSS 2.0 feed. Both comments and pings are currently closed.
Many of the articles on Light from the Right first appeared on either The New American or the McAlvany Intelligence Advisor.