If You Can’t Arm Teachers, Arm Kids … With Rocks

This article appeared online at TheNewAmerican.com on Saturday, March 24, 2018:

While testifying before the Pennsylvania House Education Committee earlier this month, Blue Mountain School District superintendent Dr. David Helsel said his district has had a plan in place for two years that is simplicity itself:

Every classroom has been equipped with a five-gallon bucket of river stone. If an armed intruder attempts to gain entrance into any of our classrooms, they will face a classroom full of students armed with rocks and [he] will be stoned. 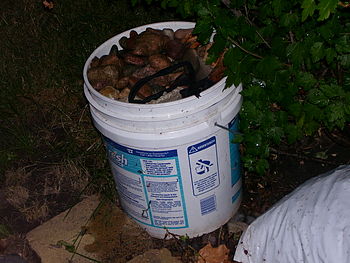 At one time I just had the idea of river stone: they’re the right size for hands, you can throw them very hard, and they will create or cause pain, which can distract.

The river stones, between three and four inches in diameter, are kept in a bucket in a closet in each classroom. They are called “go buckets.” And, according to Helsel, “We have some people who have some pretty good arms. They can chuck some rocks pretty fast.”

The revelation came from a videotape of his testimony that was picked up by BuzzFeed and then also noticed by the Chicago Tribune and the Washington Post, both of which treated the story seriously.

The Blue Mountain School District is located about 90 miles northwest of Philadelphia and has about 2,700 students in three elementary schools, a middle school, and a high school. Kristen De Groot, an investigator with the Chicago Tribune, interviewed some of the students about the strategy, one of whom said that heaving stones was likely to be a better strategy than throwing pencils, scissors, books or laptops at the attacker.

When Eli Rosenberg of the Washington Post asked Helsel about the plan, he admitted: “Obviously a rock against a gun isn’t a fair fight, but it’s better than nothing. I’m not sure why some people feel that it’s more appropriate to be a stationary target under a desk in a classroom rather than be empowered to defend yourself and provide a response to deter the entry of an armed intruder into their classroom.”

Not everyone considered the strategy as a reasonable deterrent against a school shooter. One observer commented on BuzzFeed, “Welcome to Schuykill County, where the people are dumb but the rocks are plentiful.” Others raised rhetorical questions about what caliber were the rocks, did the teachers and students have to undergo training in their use, would state law require anyone carrying a rock in their pocket or purse to have a concealed weapons permit, and so forth. Still others pondered the question about signage: “Beware! Our Teachers are armed with rocks to protect our students.”

The district does have one maintenance worker who is also armed and trained to act as a security guard. The good news is that, since the “go bucket” program was instituted two years ago, not a single shooter has ventured onto any of the campuses to test its effectiveness.

attack classrooms Education response shooter teachers weapons
This entry was posted on Saturday, March 24th, 2018 at 12:07 pm and is filed under Crime. You can follow any responses to this entry through the RSS 2.0 feed. Both comments and pings are currently closed.
Many of the articles on Light from the Right first appeared on either The New American or the McAlvany Intelligence Advisor.