This article appeared online at TheNewAmerican.com on Tuesday, March 6, 2018: 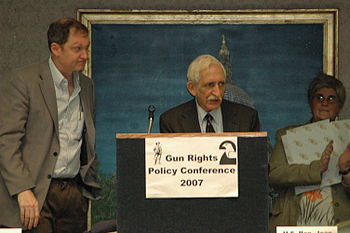 John Lott (left) being presented SAF’s Journalist of the Year

In a report that the national media didn’t deem newsworthy, the Office of Public Safety at the Lawrence campus of the University of Kansas (KU) said last week that during the first six months that students were allowed to carry concealed on campus, there were no incidents — zero criminal weapons violations — to report. But the office did report that overall crime, mostly thefts, dropped by 13 percent.

The report said nothing about the freedom granted students starting last July to carry concealed on campus if they so desired, but instead stated that the drop in crime and the utter lack of weapons violations were likely due to “the use of security technology on campus, such as cameras … and more police and security officers [that] were added to the Public Safety Office in 2017.”

Undoubtedly, if there had been one weapons violation — just one — it would have made headline news in every liberal media outlet in the country. But in its absence, the media has remained silent.

The Kansas City Star noted that prior to July 1, there had been 14 weapons violations on the campus between 2008 and 2016. That was when the campus was a so-called gun-free zone. But since July 1, there has not been a single incident. A spokesman for KU Public Safety, Captain James Anguiano, said it was too early to tell if the decrease was permanent: “We know that crime could go up next year.”

And one can be certain that if it does the mainstream will cover it like a blanket.

The KU report, issued annually, didn’t surprise Dudley Brown, head of the National Association for Gun Rights (NAGR): “There’s no doubt that allowing citizens … to carry the tools of self-defense makes criminals think twice.” It’s also in line with the analysis John Lott provided in his book The War on Guns:

Since 2011, there have been only three mass public shootings in areas where concealed carry was allowed.… These cases are very rare. From 1950-2010, not a single mass shooting occurred in an area where general civilians are allowed to carry guns.

Over the entire period from 1950 through February 2016, just over 1 percent of mass public shootings occurred in such places.

Put another way, according to Lott, more than 98 percent of the time shooters choose places where their intended victims aren’t allowed to defend themselves with firearms.

Lott then reviews the shooters who left notes and plans behind, such as Khalil Abu-Rayyan, an ISIS supporter who was planning an attack on one of the biggest churches in Detroit. According to Lott, Rayyan explained his choice of target this way: “A lot of people go there. Plus people are not allowed to carry guns in church. Plus, it would make the news. Everybody [on the planet] would’ve heard [about it].”

Dylann Roof, the shooter at the 2015 Charleston, South Carolina, church, was originally going to shoot up a nearby campus but changed his plans when he learned that his target, the College of Charleston, had armed guards.

James Holmes, the “Batman movie killer,” was originally planning to attack a nearby airport but decided not to, as he wrote in his diary, because of “substantial security” there. Holmes then selected a move theater that was a gun-free zone, even though there were six other theaters closer to where he lived.

It’s a general rule that where people are free to defend themselves with firearms, crime will decline. Ben Shapiro, Daily Wire’s editor-in-chief, published a chart showing (and contrasting) the percent changes in firearm ownership in the country versus the nation’s gun homicide rate from 1993 through 2013. While the number of privately owned firearms increased by 56 percent, the gun homicide rate dropped by 49 percent. Tweeted Shapiro, “Please explain how more guns inevitably mean more murder?”

Lott’s Crime Prevention Research Center noted that between 2007 and 2015, the number of concealed carry permits issued nationally skyrocketed by 215 percent, while the murder rate dropped by 14 percent and the overall crime rate dropped by 21 percent.

Kansas is one of just eight states that allow concealed carry on campus, while 23 states leave that decision up to the schools and universities themselves. Sixteen states still ban outright the possession of firearms on campus.

Concealed Carry Crime defense firearms Freedom guns James Holmes Kansas Liberal Mainstream Media rights
This entry was posted on Thursday, March 8th, 2018 at 6:27 am and is filed under Crime, Second Amendment. You can follow any responses to this entry through the RSS 2.0 feed. Both comments and pings are currently closed.
Many of the articles on Light from the Right first appeared on either The New American or the McAlvany Intelligence Advisor.