Did “Something Happen” that Ghastly day at Marjory Stoneman Douglas High School?

This article was published by The McAlvany Intelligence Advisor on Monday, February 26, 2018: 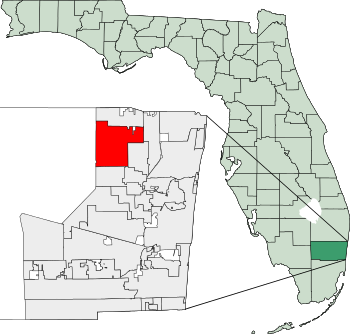 Location within Broward and the state of Florida

When President Trump learned that a Broward County (Florida) sheriff could have ended the shooting spree almost immediately but didn’t, he told a reporter: “He [Scot Peterson] trained his whole life. When it came time to get in there and do something, he didn’t have the courage or something happened, but he certainly did a poor job – there’s no question about that.”

If the reporter asked Trump what he meant by “something happened” it was not recorded. But the president, who knows more than he is allowed to say about such incidents, might have given away the scam. The way the media reported “what happened” has been headline news for nearly the two weeks since the worst high school shooting in American history that took place on Valentine’s Day.

What happened, according to the media, is that four Broward County sheriffs shirked their duty and hid behind their vehicles while the crazed shooter gunned down students at his former high school. And then he escaped with the students during their panicked melee as they left the building.

The media focused all of its attention on gun control: CNN cobbled together a “town hall” to talk about it, but made sure that no student would be allowed to raise any embarrassing questions or offer a point of view that differed from CNN’s: it was all due to lax gun controls, and more stringent laws are required to keep this incident from being repeated in the future.

Little was said about the hero of the day, who didn’t follow the script. As published by the local paper, the Tribunist, reporters gave credit where credit is due: to one Coral Springs Police Department Sergeant Jeff Heinrich.

Heinrich is a long-time supporter of the school. His wife is an assistant athletic director and their son is a student (who survived the shooting). Heinrich was off-duty, unarmed, wearing just shorts and a t-shirt and watering the baseball field when he first heard the fire alarm go off followed by rifle shots. He immediately stopped what he was doing and ran towards the sound of gunfire. Reporters with the local paper Tribunist wrote what happened next:

When the fire alarm went off, he didn’t think it was unusual. The panic that ensued changed his mind. When he heard shots, he ran toward the sound of the gunfire.

On the way to the school he found a student who had been shot in the leg. Sgt. Heinrich moved the boy to a dugout and stabilized him with supplies in the baseball team’s first-aid kit.

He then ran back to the school. There, he met a Coral Springs SWAT team member who had extra gear. Sgt. Heinrich threw on an extra vest (one that wasn’t rated to stop rifle fire). The SWAT officer handed over his sidearm so Sgt. Heinrich wouldn’t be unarmed, and they entered the building.

Sgt. Heinrich ran into the chaos. He didn’t wait outside. The officers from Coral Springs [Police Department] led the way. Behind them, paramedics were able to triage and treat the wounded [students]. The SWAT medics from Coral Springs provided crucial support.

[Only then did] the Broward County Sheriff’s Department [go] in after Coral Springs [people].

Almost simultaneously, Sheriff’s deputy Scot Peterson, sitting at his desk on campus doing some paperwork, heard the same gunfire and also ran towards the sound. However, when he came up to the door leading into the building where the shooter was picking off student after student, he pulled up. Reports indicate that he called in for backup, established a “perimeter,” and waited for four minutes while the shooter continued to fire upon unarmed students inside.

Shortly thereafter, three more Broward County sheriff’s deputies pulled up in their cruisers, unholstered their sidearms and took cover behind their vehicles. When additional CSPD officers showed up and entered the building hard on the heels of Heinrich, the four deputies remained outside. All of which was captured on video with images clear enough for Broward County Sheriff Scott Israel to tell the media:

What I saw was a deputy arrive [Peterson] … take up a position and he never went in … [he should have gone] in [and] addressed the killer … killed the killer.

The next day Israel announced that he had fired Peterson, who then filed his retirement papers and left the building. Two of the other deputies who remained behind their vehicles as other officers were entering the school building were placed on paid leave, pending investigation. Two other deputies were also suspended during an investigation into why various clues that the shooter was dangerous were never acted upon by them.

There are too many unanswered questions to write this ghastly atrocity off as the crazed behavior of a drug-affected loner. First, of course, is the CNN “town hall” which was put together in less than a week. Reporters learned that CNN people set up shop at the high school to interview students with the right attitude: guns are the problem and legislators in bed with the NRA are the enablers. CNN was found later to have rewritten scripts from some students who had the audacity to ask questions or propose solutions that didn’t fit CNN’s anti-gun narrative. Dana Loesch, the NRA’s national spokeswoman, was actually threatened with her life at that meeting and had to be escorted from the building by armed guards. Senator Ted Cruz suffered awful indignities by people carefully coached to ask him “when did you stop beating your wife” type of questions.

Hundreds of students suddenly showed up en mass in Tallahassee and Washington over the weekend to protest and demand that politicians inflict even more gun controls on law-abiding citizens who had nothing to do with the Parkland, Florida shooting. Who paid for them? Who organized them? How did that happen? Was this an “organic” gathering or was it staged?

Why did Broward County Sheriff Scott Israel allow his deputies to ignore the standard protocol developed following other mass shootings to end them as quickly as possible: move on the shooter immediately and neutralize him, with lethal force if necessary, rather than setting up a perimeter and waiting for backup and a negotiator?

Why did the FBI and local law enforcement ignore repeated warnings that the shooter was a looney tune and dangerous? Some 39 visits to his home over the past seven years should have given someone a clue. But no. And why not?

Does it make any sense to link Israel’s politics (he’s a Democrat) with Debbie Wasserman Schulz’s, the discredited DNC chair who happens to represent Broward County in Washington?

The Washington Post saw its opportunity to savage the president over his suggestions that armed and trained individuals among victims during such an attack would be able to end it immediately. Wrote the Post:

Trump has frequently suggested in response to mass shootings that more law-abiding people with firearms could help stop a shooter and the head of the NRA has repeatedly suggested the same. However, Israel’s announcement Thursday suggested that even if a person is armed, trained, and available to help, that may not stop a mass killing that unfolds in a matter of minutes.

All of this is simply too pat, too suspicious, too contrived to be the reaction to an unanticipated, unplanned attack by a lone gunman. The Evil One, who has captured vast reaches of the mainstream media, cares nothing for human life. The media, with His complicity, has milked this atrocity so successfully that even the president has fallen into His trap. He now is pushing for raising the age requirement for the purchase of various semi-automatic weapons and expanding the national gun registry system (i.e., the NICS) so that every living soul in the country who legally owns a firearm can be tracked, followed and, when necessary, be relived of them in the event of a national “emergency.”

DailyMail.co.uk: FOUR county sheriff deputies ‘cowered behind their cars during Parkland school shooting and refused to enter the building’ according to Florida police officers who ran in to try and stop the attack

Sun-Sentinel.com: Stoneman Douglas cop resigns; sheriff says he should have ‘killed the killer’

Tribunist.com: He’s The Heroic Police Officer Who Charged into Douglas High School in Shorts and a T-Shirt to Save Lives

attack courage danger escape firearms Gun Control guns Mainstream Media NRA rights sheriffs shooter Ted Cruz weapons
This entry was posted on Monday, February 26th, 2018 at 10:29 am and is filed under Crime. You can follow any responses to this entry through the RSS 2.0 feed. Both comments and pings are currently closed.
Many of the articles on Light from the Right first appeared on either The New American or the McAlvany Intelligence Advisor.