This article appeared online at TheNewAmerican.com on Wednesday, February 14, 2018: 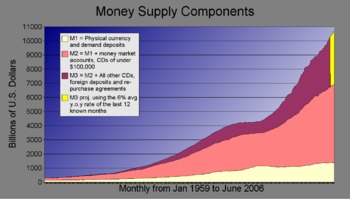 Money-supply (this is an old chart, but you get the idea)

Once Wall Street traders read beyond the headlines released early Wednesday morning by the Bureau of Labor Statistics (BLS), they reversed the early selloff and bid the market higher.

Those traders were on high alert following the January report that wages had jumped nearly three percent last year. This triggered concerns that inflation was imminent, and that the Fed would institute interest rate increases which would slow the economy.

The headline from the BLS seemed to confirm those concerns: “The Consumer Price Index for All Urban Consumers increased 0.5 percent in January on a seasonally-adjusted basis.” That’s an annual rate of six percent, which would, if it persisted, likely force higher interest rates from the Fed, the very engine of inflation itself. Such a move would be an attempt by the privately-held central bank to mitigate the very price spiral that it instigated.

But then the BLS added, “Over the last 12 months the all items index rose 2.1 percent … the same increase as for the 12 months ending December.” This is government bureaucrat-speak for “There’s nothing to see here; just move along.”

Those same statisticians went on to say that “the index for all items less food and energy rose 1.8 percent over the past year.” That’s because energy and food prices are notoriously volatile. That volatility is revealed in its chart: In January, gasoline prices rose 5.7 percent from the previous month, while fuel oil (used by 5.7 million households) prices jumped a breathtaking 9.5 percent from December.

There’s another factor to consider: The January numbers from the BLS are the first to reflect seasonal-adjustment changes in how the agency calculates prices paid by consumers. As Daniel Silver of JPMorgan wrote to his clients, “The broader narrative on core inflation is unchanged following the recent revision to the CPI data.”

In addition, the BLS report showed that concerns over wage inflation from January were overblown, as real average weekly earnings fell by 0.8 percent in January.

Angst that the BLS report would galvanize the Fed to increase interest rates sooner than later is also tempered by another measure of inflation used by the central bank: the personal consumption expenditures price index (PCE), which has consistently measured those price increases at least three-tenths of a percent lower than the BLS. That would put real inflation (i.e., price increases) closer to 1.5 percent, a very long, long way from six percent.

Properly defined, inflation is an increase in the money supply, with price increases being the natural inevitable result as each piece of currency becomes less valuable over time. And only the Fed increases the supply of money. (Counterfeiters would be the only exception, to whom the Fed is often compared.) But, according to statistics from the Fed’s St. Louis branch, the total gross supply of money in the U.S. economy peaked at $4.16 trillion on April 15, 2015, and it has slowly declined ever since. On January 31, 2018, the supply of money had dropped to $3.8 trillion. So instead of inflating the money supply, the Fed has actually been deflating it a little. So the usually guilty suspect appears for the moment at least to be innocent.

What’s likely to happen is that the BLS’s February report will adjust the January number downward. And that will likely be due to much lower gas prices as lower crude oil prices — now trading below $60 a barrel, down from $70 just a few months ago — translate into much lower prices at the pump.

Wall Street traders, initially distracted by the inflation report from the BLS, got back to business and moved the market higher in later Wednesday morning trading in anticipation of a steadily improving economy.

bureaucrat Central Bank Consumer Price Index Currency Economy Gas Prices Inflation Interest Rates Money Supply Oil Prices trading Wall Street
This entry was posted on Thursday, February 15th, 2018 at 6:46 am and is filed under Economics. You can follow any responses to this entry through the RSS 2.0 feed. Both comments and pings are currently closed.
Many of the articles on Light from the Right first appeared on either The New American or the McAlvany Intelligence Advisor.