This article appeared online at TheNewAmerican.com on Monday, January 29, 2018: 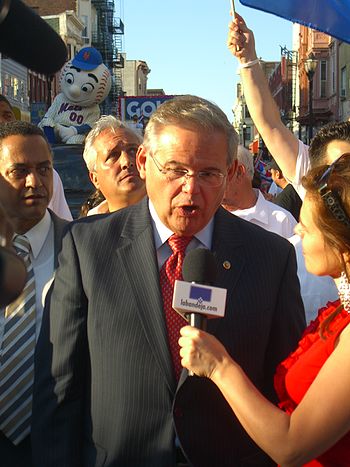 New Jersey Democrat Senator Bob Menendez escaped being convicted on 18 charges of corruption, self-dealing, and failures to report income last November but now the clock on his retrial has run out. It is expected that the date for his retrial on many of those same charges will be announced this week.

The judge in the case last year has recused himself from the retrial but has aided the prosecution in its new efforts to convict Menendez. Following the declaration of a hung jury last November the senator’s defense attorneys filed a motion to have that judge, Senior U.S. District Judge William Walls, dismiss all 18 charges. Walls filed a 50-page brief explaining why he would only dismiss the minor ones. He left in place the most damaging charges and then helped the Department of Justice lawyers improve their case against Menendez by explaining why:

Regarding the gifts that his friend, Florida eye doctor Salomon Melgen, gave Menendez: “A rational juror could find that Melgen gave Menendez gifts intending that Menendez take official actions he would not otherwise take.”

The defense has lost a key character witness in the trial: Menendez’ “good friend” Melgen has been convicted of 67 charges of Medicare fraud, totaling more than $100 million, and is awaiting sentencing that could put him away for up to 30 years.

The charges brought by the DOJ looked persuasive: that Menendez intervened with Medicare in order to keep his friend from returning some $9 million in excessive reimbursements; that he pressured federal officials to protect a port security contract held by a company in the Dominican Republic [Melgen is a citizen there and a major investor in the company] from going out to bid; that he was paid off by Melgen with various favors including trips on Melgen’s private jet (which he failed to report as required by the Senate), and that he made substantial high-six-figure contributions to his reelection campaigns; that he bribed federal officials, committing fraud and making false statements in the process; and more.

Prosecutors also charged that Menendez acted as Melgen’s “personal senator,” helping him obtain visas for several of Melgen’s “girlfriends” [read: prostitutes] from the Dominican Republic to entertain them at Melgen’s private estate in Florida.

Corruption aggregator DiscoverTheNetworks.com called the relationship between Menendez and Melgen a “corrupt pact spanning seven years [during] which Melgen showered many more things of value on the New Jersey senator than just flights on a private jet.… Menendez reciprocated with official action advancing the South Florida eye doctor’s personal whims and business interests.”

Despite the fewer, much tighter and more focused charges the DOJ is likely to bring to the trial, it will still have a tall hill to climb. Menendez is a virtual fixture in liberal Democrat New Jersey politics and has the support of New Jersey’s newly inaugurated Governor Phil Murphy. The prosecution also lacks a “smoking gun” — a credible third party witness to the crimes Menendez is being charged with — and so must rely on circumstantial evidence and inferences that the gifts were payoffs and not just exchanges between good friends.

What’s potentially most damaging to Menendez is not whether he is found guilty or innocent but the timing of the trial. There’s a very good chance that the trial — accompanied by the steady drumbeat of related lurid headlines — could still be going on on June 5, the day of New Jersey’s primary. If so, would Democratic voters want to risk nominating a candidate who could end up getting convicted by the time of the general election in November?

Corruption Crime Democrat Fraud guilt Liberal politics self-dealing
This entry was posted on Tuesday, January 30th, 2018 at 6:15 am and is filed under Crime, Politics. You can follow any responses to this entry through the RSS 2.0 feed. Both comments and pings are currently closed.
Many of the articles on Light from the Right first appeared on either The New American or the McAlvany Intelligence Advisor.