This article was published by The McAlvany Intelligence Advisor on Monday, January 15, 2018: 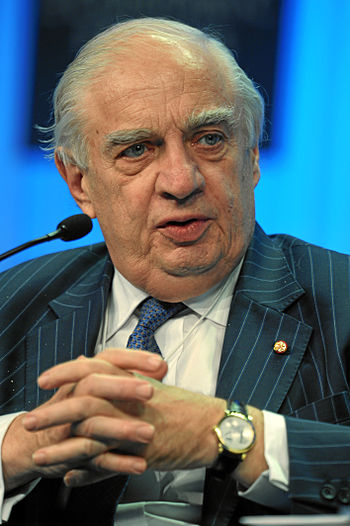 Peter Sutherland lived just long enough to see his dream – a beige world filled with non-resistant sheeple – seriously challenged. He is quoted as saying that plans to extricate itself from the European Union by the United Kingdom (Brexit) are “insane” and “morally indefensible.” During President Trump’s first year in office, Sutherland was in declining health (he’d suffered a heart attack last year and had never fully recovered) and so quotes about his opinion of MAGA and “America First” aren’t available. But during Trump’s presidential campaign Sutherland was in full throat: Trump’s promise to protect America from radical Islamists was  “utterly disgraceful.” After all most of them were fleeing oppression and, according to Sutherland, “We should be worried about human lives” and not border security.

Sutherland was the United Nations’ Special Representative of the Secretary-General for International Migration until last March. That allowed him to head up his own creation, the Global Forum on Migration and Development, which he used to trumpet his views that “migration” (never, please note, “illegal immigration”) was going to save countries with low birth rates from extinction. Anyone, or any government, that dared restrict the flow of “migration” were being “held hostage by xenophobic parties, [using] anti-immigrant rhetoric to win over a fearful public.” After all, added Sutherland, “Europe can never have enough entrepreneurs, whose ideas drive economies and create jobs.” Even if they’re there illegally.

He presented his views on “migration” to a UK House of Lords committee in 2012, claiming that a) “at the most basic level individuals should have freedom of choice” about working and living in any country they choose; b) that unlimited immigration is a “crucial dynamic for economic growth … however difficult it may be to explain this to the citizens of those states”; c) that “it is fundamentally important for states [sovereign countries] to cooperate on migration policy rather than developing their own policies in isolation, as no state is or can be an island”; d) that multiculturalism is both inevitable and desirable; and e) that “the European Union, in my view, should be doing its best to undermine [any] sense of our homogeneity and difference from others.”

Sutherland himself said that of all the boards on which he served, of all the efforts he bent towards the goal of international control of global trade and the resulting need for an international governing political body as a result, he considered his efforts to create the World Trade Organization (WTO) one of his most important.

Serving early on as Ireland’s attorney general, he became Ireland’s representative on the European Commission, working towards creating the European Union. He became the founding director-general for the World Trade Organization following the Uruguay Round of discussions over the General Agreement on Tariffs and Trade (GATT). GATT was sold in 1947 to a war-weary public as a way to promote international trade by reducing or eliminating trade barriers such as tariffs or quotas. Its preamble told only part of its purpose: the “substantial reduction of tariffs and other trade barriers and the elimination of preferences, on a reciprocal and mutually advantageous basis.”

There were two pieces missing: it was never explained why governments had to get involved in the issue if it were truly “free” trade. Couldn’t a simple sentence between consenting governments suffice: “There shall be free trade between our countries”? The other was the necessity, slow in coming but certain in its goal, for international organizations run by unelected officials to enforce those “free trade” agreements.

Those global talks had slowed nearly to a stop in 1993 when Sutherland took over. By dint of his personality and his commitment, he “employed tactics the likes of which had never been seen before in GATT … he worked to create the sense of unstoppable momentum by mobilizing the press and media and instigating a more aggressive public relations than the staid GATT had ever before seen” – a quote from historian Craig VanGrasstek who was present at the revolution. Once completed, instead of a single sentence declaring that there would be “free trade” between consenting sovereign governments, Sutherland birthed a 22,000-page document that laid the groundwork for the political stitching together of the European Union that was his goal all along.

For his success, he received all manner of awards, degrees, and recognition. His Wikipedia entry lists at least 35, including, not surprisingly, the David Rockefeller International Leadership Award.

Sutherland had such a large presence in the efforts to homogenize the world that many with similar views offered their condolences at his passing last week.  Ireland’s Prime Minister Leo Varadkar said that Sutherland was somehow strangely a tripartite loyalist: “an Irishman, a committed European, and a proud internationalist.” Varadkar said nothing about how Sutherland used his divided loyalties to build international trade agreements that led to significant abrogation of Ireland’s national sovereignty.

European Commission (EC) President Jean-Claude Juncker was clearer: Sutherland was “a true European [who] believed strongly in the work of the European Union and other international organizations and their importance for cooperation and international dialogue.”

Few others are lamenting Sutherland’s passage from this life. Those who have seen through the smokescreen of “free trade” as a cover for political control are likely breathing a little easier. They are more likely rejoicing that an American – the first in eight years – is finally in the White House with the view that immigration into the country is a privilege and not a right.

Amazon: The History and Future of the World Trade Organization by Craig VanGrasstek

Background on GATT, the precursor to the WTO

Donald Trump European Union Fraud immigration Ireland politics purpose radical Sovereignty United Nations
This entry was posted on Tuesday, January 16th, 2018 at 6:19 am and is filed under History, Politics. You can follow any responses to this entry through the RSS 2.0 feed. Both comments and pings are currently closed.
Many of the articles on Light from the Right first appeared on either The New American or the McAlvany Intelligence Advisor.