This article appeared online at TheNewAmerican.com on Monday, January 15, 2018:

The death on January 7 of Peter Sutherland, 71, the “father of globalization” (a moniker applied to him by President Clinton’s secretary of commerce) leaves a hole in the broad plan by globalists to use free trade as a cover for the completion of the New World Order to be run by them. Ireland’s Prime Minister Leo Varadkar declared that Sutherland was somehow strangely a tripartite loyalist: “an Irishman, a committed European, and a proud internationalist.” Varadkar said nothing about how Sutherland used his divided loyalties to build international trade agreements that led to significant abrogation of Ireland’s national sovereignty. 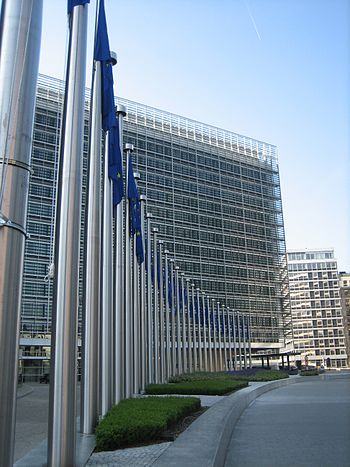 The offices of the European Commission

stating Sutherland was “a true European [who] believed strongly in the work of the European Union and other international organizations and their importance for cooperation and international dialogue.”

Sutherland himself said that of all the boards on which he served, of all the efforts he bent toward the goal of international control of global trade and the resulting need for an international governing political body as a result, he considered his efforts to create the World Trade Organization (WTO) one of his most important.

Serving early on as Ireland’s attorney general, he became that country’s representative on the European Commission, working toward creating the European Union. He became the founding director-general for the World Trade Organization following the Uruguay Round of discussions over the General Agreement on Tariffs and Trade (GATT). GATT was sold in 1947 to a war-weary public as a way to promote international trade by reducing or eliminating trade barriers such as tariffs or quotas. Its preamble told only half of its purpose: the “substantial reduction of tariffs and other trade barriers and the elimination of preferences, on a reciprocal and mutually advantageous basis.”

There were two pieces missing. It was never explained why governments had to get involved in the issue if it were truly “free” trade. Couldn’t the following simple sentence between consenting governments suffice? “There shall be free trade between our countries.” The other was the necessity, slow in coming but certain in its goal, for international organizations run by unelected officials to enforce those “free trade” agreements.

Those global talks had slowed nearly to a stop in 1993 when Sutherland took over. By dint of his personality and his commitment, he “employed tactics the likes of which had never been seen before in GATT.… He worked to create the sense of unstoppable momentum by mobilizing the press and media and instigating a more aggressive public relations than the staid GATT had ever before seen” — a quote from historian Craig VanGrasstek, who was present at the revolution. Once completed, instead of a single sentence declaring that there would be “free trade” between consenting sovereign governments, Sutherland birthed a 22,000-page document that laid the groundwork for the political stitching together of the European Union — which was his goal all along.

Sutherland enjoyed all the accoutrements of power and influence that came with his success in driving the move toward global government: He served as chairman of the Allied Irish Bank and was the international chairman of both Goldman Sachs and the huge energy company British Petroleum. He served as chairman of the London School of Economics, and was a regular attendee at meetings of the Bilderberg Group while serving on its steering committee. He was chairman of the European affiliate of the Trilateral Commission and received many honors and distinctions from his peers including, not surprisingly, the David Rockefeller International Leadership Award.

Until months before his death, Sutherland continued to push for internationalism through illegal immigration. He presented his views to a U.K. House of Lords committee in 2012 claiming that a) “at the most basic level individuals should have freedom of choice” about working and living in any country they desire; b) that unlimited immigration is a “crucial dynamic for economic growth … however difficult it may be to explain this to the citizens of those states”; c) that “it is fundamentally important for states [sovereign countries] to cooperate on migration policy rather than developing their own policies in isolation, as no state is or can be an island”; d) that multiculturalism is both inevitable and desirable; and e) that “the European Union, in my view, should be doing its best to undermine [any] sense of our homogeneity and difference from others.”

Before his death Sutherland continued to lend his considerable energies and credence as head of the Global Forum on Migration and Development for the United Nations. Said Ireland’s President Michael Higgins, “He leaves an important legacy through his works as Secretary-General, having brought the importance of migration to the forefront of public thought and policy.”

Among those who have seen through the smokescreen that uses “free trade” as a cover for global government and remain persuaded that national sovereignty is still the highest and best means toward international cooperation and peace ever devised, Sutherland’s permanent absence from the scene will not be lamented.

Bilderberg Group European Union global Goldman Sachs Illegal Immigration New World Order power purpose Sovereignty United Nations
This entry was posted on Tuesday, January 16th, 2018 at 6:26 am and is filed under Uncategorized. You can follow any responses to this entry through the RSS 2.0 feed. Both comments and pings are currently closed.
Many of the articles on Light from the Right first appeared on either The New American or the McAlvany Intelligence Advisor.