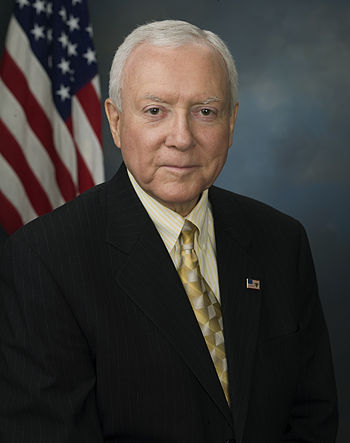 This article appeared online at TheNewAmerican.com on Wednesday, January 3, 2018:

If Mitt Romney ends up in Orrin Hatch’s Senate seat, that would mean one RINO (Republican In Name Only) replacing another.

A boxer in his youth, Republican Senator Orrin Hatch of Utah announced on Tuesday that he was hanging up his gloves for good. After 40 years in the Senate, he said that he had been fighting the good fight but that it was time for him to make his exit:

When the president visited Utah last month, he said I was a fighter. I’ve always been a fighter. I was an amateur boxer in my youth, and I brought that fighting spirit with me to Washington.

But every good fighter knows when to hang up the gloves.

He said he will leave the Senate when his current term ends at the end of this year.

It was unclear exactly what “fight” the 83-year-old senator was referring to. RoWas he most proud of voting to confirm every current member of the Supreme Court, whether liberal or conservative? Was it his well-earned reputation for “bipartisanship” such as working with Massachusetts Democrat Senator Ted Kennedy in inflicting the Children’s Health Insurance Program, known as CHIP, onto American taxpayers and outside the confines of the Constitution? Was it his support for TARP (the Troubled Asset Relief Program), a vote that he later regretted? Was it his repeated efforts to force a balanced budget amendment onto the Constitution (Hatch sponsored one 17 times and voted for it at least 9 times)? Or was it his recent declaration that if Alabama Judge Roy Moore had won the Senate seat, it would have been a “stain on the GOP and the nation”?

For 40 years The John Birch Society and its affilated publications (The Review of the News, and later The New American) have been tracking Hatch’s voting record on bills that reflected his commitment to his oath of office to support and defend the Constitution. In this magazine’s “Freedom Index,” his score is 56 percent.

As early as last April the chairs were being set at the table for former Massachusetts Governor Mitt Romney, living in Utah and now declaring it his home state, to replace Hatch should the opportunity arise. The Wall Street Journal reported that Senate Majority Leader Mitch McConnell (R-Ky.) said that he had spoken to Romney back then about running for Hatch’s seat, just in case.

Romney’s chief fundraiser, Spencer Zwick, was circumspect when asked about the former Massachusetts governor’s plans, but made it clear for those skilled at reading between the lines, stating: “Of all the people who can run, Mitt will represent and honor the legacy of Senator Hatch more than anybody.”

Romney will also add some zest in his new position as Utah’s senator. During Trump’s campaign Romney called the candidate a “fraud” and “phony” but was briefly if not permanently reconciled to the new president when Trump had Romney on his short list for secretary of state.

Romney would be perfect in the role of staunch blocker of the Trump agenda. RomneyCare, which was adoped while he was governor of Massachusetts and served as a model for ObamaCare, included state-level subsidies by Massachusetts taxpayers and a state-required mandate for those same taxpayers to buy insurance, or else. If Romney were in the U.S. Senate, it would be hard to imagine him supporting any further dismantling of the ObamaCare program that took its lead from his own RomneyCare creation in Massachusetts.

Romney is a well-established and -heeled RINO (Republican In Name Only): His BA degree from Brigham Young University in 1971 was followed by a joint JD-MBA degree from Harvard University in 1975; and his considerable personal wealth (estimated to be about $250 million) puts him above the fray and into the ranks of the elitists running the GOP on the national level.

Romney hasn’t announced his intentions to run for Hatch’s U.S. Senate seat yet — he has given himself a couple of weeks to consider the matter, he says — but at this time it appears that his election would be all but certain if he were to throw his hat into the ring. With family ties going back generations, and the tacit support of the LDS Church (Utah is 60 percent Mormon), Romney would likely win in a walk, replacing one RINO with another. Yet, it must be kept in mind too that Utah is not exactly RINO country, and widespread exposure of Romney’s record would certainly negatively impact his political prospects there.

Balanced Budget Conservative Constitution Fraud John Birch Society Liberal Mitch McConnell Mitt Romney Obamacare Republican RINO TARP Ted Kennedy The New American
This entry was posted on Thursday, January 4th, 2018 at 7:14 am and is filed under Crime, Politics. You can follow any responses to this entry through the RSS 2.0 feed. Both comments and pings are currently closed.
Many of the articles on Light from the Right first appeared on either The New American or the McAlvany Intelligence Advisor.