The New York Times Masks the Truth in Venezuela

This article was published by The McAlvany Intelligence Advisor on Wednesday, December 20, 2017: 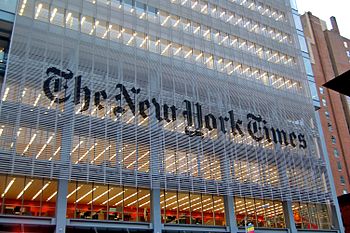 After five months and 5,000 words, the journalists at the New York Times refused to use the word “socialism” as the cause of the horrors they uncovered in Venezuela. Instead, Venezuela’s problems are the result of years of “economic mismanagement” instead.

What they found was horrific, and more than sufficient to prove the point: socialism destroys, maims, and kills. Its worst atrocities are inflicted on the defenseless: the elderly and the very young. The intrepid journalists focused on the latter, and what they found was predictable and heartrending: babies in Venezuela are dying of malnutrition at rates seen only in refugee and concentration camps. Emergency rooms are filled to overflowing by mothers with starving infants at their breasts while others are being turned away. Doctors told the journos that children arrive at the hospitals weighing the same as when they were born. Infant mortality rates are soaring, and there’s little doctors can do about it. Said the authors: “The statistics that have come out are staggering. In the Ministry of Health’s 2015 report, the mortality rate for children under four weeks old had increased a hundredfold [while] maternal mortality had increased nearly fivefold.”

Matt Vespa suffers under no such confusion about the cause of what’s happening there:

Venezuela was once a beacon of what the late Hugo Chavez called 21st Century Socialism. Oil prices were up; things were going well. Then, things fell apart. The drop in oil prices has been a contributing factor. Venezuelans for a few years now have lacked access to medicine, food, soap, toilet paper, and other basic commodities. They’re eating out of trashcans. Cats, dogs, and birds are being eaten. Even animals at the zoo are being stolen for consumption. There’s a food police that targets people who wait in food lines. That’s bad public relations for the government. The hospital system is in an awful state of disrepair, with soap and gloves being items that are in short supply. As a result, health care in the country has reverted back to 19th century conditions. Even educated people, like doctors and teachers, are resorting to prostitution to feed themselves and their families. Children have begun joining the sex industry to help their families eat. It truly is a horror show.

Vespa noted that Maduro’s government made it difficult for the Times’ people to get to the truth by “blacking out key medical data to keep this problem buried, with doctors being told to omit malnutrition notes in children’s medical records … it’s because 21st Century Socialism has failed. It’s because the government knows there’s a serious problem, but isn’t willing to admit this.”

There are other evidences of collapse that Maduro has been unable to hide. There are the dozen or more oil tankers waiting to offload their cargoes at the PDVSA ports, but the unloading fees haven’t been paid. The deferred maintenance of its facilities due to lack of funds has been reducing the company’s output, with RBC Capital Markets reporting on Monday that its output in 2018 will “plunge” below the record set this year. Once refining more than three million barrels a day for export, PDVSA’s production is now approaching half that.

Its bondholders are being stiffed. It’s been a month since Maduro held a creditors’ meeting in Caracas, with nary a word, or payment, since then. The last time PDVSA made any bond interest payments was in September, with the total now overdue exceeding $700 million on eight separate bonds.

In his efforts to focus attention away from his own corrupt policies, Maduro has had arrested and is keeping in jail top people from Citgo, wholly owned by his government’s PDVSA oil company. He has laughed off efforts by the Trump administration to release them because they are American citizens, claiming that they are also Venezuelans and therefore guilty of corrupt practices in running PDVSA.

One useful result of the Times’ study is to provide further evidence of the complete and utter failure of socialism as a viable economic system. Its fruits are always the same: a massive decline in the standard of living for its hapless and helpless citizens, an increase in the mortality rate of the elderly and the very young (and their mothers), a loss of freedom and dignity, and the turning back of an advanced society to the middle ages where barter is being adopted thanks to the destruction of the currency.

The Time’s study also shows that the only way such a system lasts is through infusion of resources from outside. In this case it’s both American and Russian interests that are keeping Maduro in power. American oil refiners with facilities on the Gulf Coast continue to purchase PDVSA oil to the tune of $1 billion a month, while a deal with Russia’s energy company Rosneft was just inked for an unknown amount helping as well.

That Rosneft deal is interesting not only in its opacity regarding how much it paid Maduro to complete the deal, but for its length. The deal – the development of two of the country’s offshore gas fields – lasts for 30 years, long after Maduro has made his unlamented passage into eternity. What Russia is doing is buying up precious assets on the cheap. It has already loaned the hapless socialist regime more than $6 billion and this deal merely provides additional collateral following its inevitable default.

Townhall: As Venezuela Collapses, Scores Of Children Are Dying Of Starvation–And The Government Is Trying To Hide It

Bloomberg: Venezuela’s Bond Investors Are Wondering If They’ve Been Dumped

OilPrice.com: Can This Extraordinary Gas Deal Save Venezuela’s Ailing Economy?

Currency doctor Economy Freedom Health Care oil Oil Prices Socialism Statistics truth
This entry was posted on Friday, December 22nd, 2017 at 5:27 am and is filed under Economics, History. You can follow any responses to this entry through the RSS 2.0 feed. Both comments and pings are currently closed.
Many of the articles on Light from the Right first appeared on either The New American or the McAlvany Intelligence Advisor.