This article appeared online at TheNewAmerican.com on Monday, December 4, 2017: 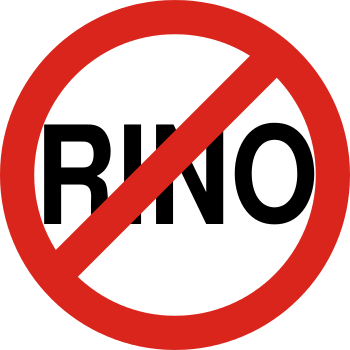 Crude drawing of the “No RINO” buttons used by American Republicans.

With the horse-trading for votes completed, the Senate voted early Saturday morning along party lines to pass the tax-reform bill Republicans desperately need to help them during mid-term elections next year. Trump exhibited his usual hyperbole over the passage, tweeting at 5:45 a.m. Saturday morning: “Biggest Tax Bill and Tax Cuts in history just passed in the Senate. Now these great Republicans will be going for final passage [conference]. Thank you to House and Senate Republicans for your hard work and commitment.”

Liberal-left Oregon Democrat Senator Jeff Markley (Freedom Index of just 14 out of 100) saw the writing on the wall and commented just before midnight Friday that the pending vote and the resulting bill was rigged in favor of the rich and powerful:

Let’s be clear: what just happened is a brazen move to rig our political system and our economy to work not for “We the People” but for “We the Powerful.” If the #GOPTaxScam is allowed to become law, it will haunt America for decades to come.

Here’s what the GOP just voted for:

Ripping health care away from 13 million

Showering massive giveaways on the richest and most powerful. #GOPTaxScam is a disgrace.

His remarks annoyed Wyoming’s Republican Senator John Barasso, who said it’s not about “taking” Americans’ healthcare away, but giving them back their freedom to choose: “I believe if people don’t want to buy the ObamaCare insurance, they shouldn’t have to pay a tax penalty to the IRS,” he stated.

The issue remained in doubt until Senate RINOs (Republicans In Name Only) John McCain (Ariz.), Susan Collins (Maine), and Lisa Murkowski (Alaska) were persuaded to vote for repeal of the mandate that they had supported as recently as last summer. The vote of Collins was bought with a promise that ObamaCare “fixes” — government funding to prop up the healthcare system to keep it from failing — would be “considered” by Senate Majority Leader Mitch McConnell before the end of the year. The three middle-of-the-road Republicans, whose Freedom Index scores are 62 out of 100, 39/100 and 48/100 respectively, certainly know that removing the mandate removes the primary support from ObamaCare. Any system that requires government force to make it work certainly will fail without that support. But the horse-trading, as shown here with the vote of Collins, persuaded the other two RINOs to support the bill.

So what does the legislation really propose?

Both the House and Senate bills cut the corporate tax rate from 35 percent to 20 percent. The original target was 15 percent but that was given up during the horse-trading process.

Initially Republicans promised tax relief for America’s middle class, with McConnell even promising that under the Senate bill none of them would see an increase in their taxes. But as the horse-trading continued, McConnell reversed himself, saying that he “misspoke on that.” Following conference it is likely that upper middle-class Americans (roughly those making upwards of $75,000 a year or more) will find themselves with a higher tax bill and one that will continue to move higher over time.

The House bill eliminates the estate tax altogether, while the Senate bill expands the exemption from $5.5 million to $11 million before a tax kicks in.

Both bills eliminate deductions of state and local taxes while capping deductions for property taxes paid at the state level at $10,000. This would hurt taxpayers living in high-tax, high-cost-of-living states such as California and New York. Since these states are liberal politically, expect to see changes here in the final bill that emerges from conference.

The Senate bill allows small business owners to deduct 23 percent of their business income from taxation, up from 17.4 percent currently, while the House bill simply created a flat 25-percent tax rate for them.

Buried in the House bill is language giving joy to pro-lifers, which may be short-lived. The key phrase allows families to put money aside before taxes into an ESA for a “child in utero.” If this passes conference, it would be a victory for anti-abortion activists by explicitly recognizing unborn children in federal law. Abortion advocates are likely to see this as a camel’s nose under the tent, and will fight against it.

After the haggling and horse-trading to get the votes necessary to pass the bill in the Senate, tax reform is closer to realization. In conference the differences between the two bills will be ironed out so that the final bill will likely please almost no one.

The only Republican senator to vote against the bill was Tennessee’s Bob Corker, who had the audacity to wonder out loud about the impact the final bill would have on the national debt. Said Corker: “At the end of the day I am not able to cast aside my fiscal concerns and vote for legislation which I believe, based on the information I currently have, could deepen the debt burden on future generations.”

All the other so-called fiscal conservatives appear to have accepted the assumption that lower taxes will lead to a stronger economy which will lead to higher federal revenues which will offset those deficits.

This entry was posted on Tuesday, December 5th, 2017 at 6:56 am and is filed under Uncategorized. You can follow any responses to this entry through the RSS 2.0 feed. Both comments and pings are currently closed.
Many of the articles on Light from the Right first appeared on either The New American or the McAlvany Intelligence Advisor.