This article appeared online at TheNewAmerican.com on Tuesday, November 28, 2017: 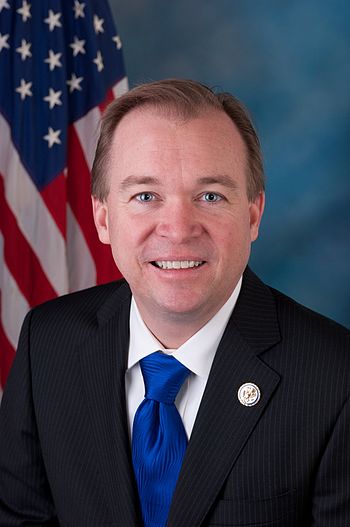 Early Monday morning Mick Mulvaney showed up for work at the office of the Consumer Financial Protection Bureau (CFPB), located inside the Federal Reserve at the Eccles Building in Washington, with a briefcase in one hand and a box of donuts in the other. On the same morning, the last-minute appointee of the departing director, Leandra English, showed up at her desk. Those expecting fireworks, as the two were essentially vying for control of the rogue agency, were disappointed.

English fired off an e-mail to the agency’s 1,623 employees saying that she was in charge, thanks to her appointment as deputy agency head by Richard Cordray, who had emptied his office and left the building on Friday. However, English’s e-mail went for naught as the general counsel for the agency, Mary McLeod, advised senior officials at the agency “to act consistently with the understanding that [OMB] Director Mulvaney is the acting director of the CFPB.”

Mulvaney put his stamp of authority on the CFPB almost immediately, issuing a memo telling the bureau’s employees to disregard English’s memo, followed by putting a 30-day freeze on the issuance of new rules and hiring additional people. Monday afternoon Mulvaney held a press conference, in effect calling his takeover of the bureau a success and laying out his plans to freeze the bureau in place, at least for the time being. One staffer who had expected a noisy confrontation between the two competing heads said, “There’s no chaos,” while a government contractor working at the bureau confirmed the fact: ”As far as they told me, it’s business as usual.”

Mulvaney made it clear that there’s a new sheriff in town: “Anyone who thinks that a Trump administration CFPB would be the same as an Obama administration CFPB is simply being naïve. Elections have consequences at every agency, including the CFPB.”

Determined not to go quietly into the night, English filed a request for a restraining order, claiming that language in the Dodd-Frank bill that established the bureau overrode legislation Congress passed in 1998 designed to clarify the executive branch’s authority when an agency head departs. Dodd-Frank, the 2010 bill ostensibly passed by Democrats to prevent another cataclysmic meltdown similar to that experienced in 2007-2008, laid out guidelines for just such an eventuality: “There is established the position of deputy director [English’s position], who shall be appointed by the director [Cordray], and serve as acting director in the absence or unavailability of the director.”

On the other hand, the Federal Vacancies Reform Act of 1998 sets the rules for vacant government agency positions and gives the president the authority to appoint an acting director. The Justice Department made it clear that the earlier rule controls, holding that while Dodd-Frank permits a deputy to serve temporarily, that “doesn’t displace the president’s authority under the Vacancies Reform Act.”

The conflict will shortly be resolved by a Trump appointee, federal judge Timothy J. Kelly at the U.S. District Court for the District of Columbia, who was confirmed by the Senate, 94-2, in September. [Note: late Monday afternoon Judge Kelly ruled in favor of Mulvaney, as expected, by rejecting English’s demand for a restraining order.]

In the meantime the bureau is at a standstill, waiting for additional marching orders from Mulvaney. Those new orders could include delaying the enactment of recently issued rules on payday loans, easing mortgage-writing underwriting standards, and reassessing pending lawsuits against companies such as student-loan service company Navient Corporation.

While The New American has repeatedly pointed out the blatant unconstitutionality of the agency, with its deliberate recombination of the “separation of powers” the nation’s Founders so determinedly put in place to keep the government in check, nothing in the present conversation makes any mention of such violation. The next best thing, however, is the freezing into place of the bureau’s unconstitutional writing, interpreting, and enforcing of its own laws. Karen Shaw Petrou, managing partner at Federal Financial Analytics, sees what’s happening at the CFPB as a result of Mulvaney’s move to take over the agency and English’s filing of a restraining order to keep him from doing so: “People will be sitting in their offices reading things and working on things but [not] doing anything about them. Other than moving the flower pots or changing the coffee in the machine, this is a standstill.”

Short of abolishing the dangerous, unaccountable, and unconstitutional bureau, this is the next best thing.

This entry was posted on Wednesday, November 29th, 2017 at 6:37 am and is filed under Politics. You can follow any responses to this entry through the RSS 2.0 feed. Both comments and pings are currently closed.
Many of the articles on Light from the Right first appeared on either The New American or the McAlvany Intelligence Advisor.