Just Because Menendez got off Doesn’t mean he’s Innocent

This article was publisehd by The McAlvany Intelligence Advisor on Friday, November 17, 2017: 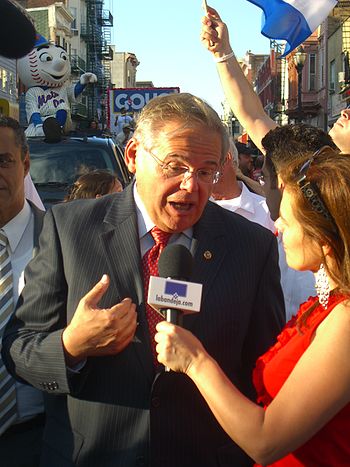 Carl Mayer has been writing about political corruption in New Jersey for decades. As one reviewer of his book Shakedown: The Fleecing of the Garden State noted:

Nobody is better qualified to report on the sordid history of 1990s New Jersey politics than Carl is. He worked tirelessly to expose the casual, endemic corruption of the New Jersey political machinery from both parties. Throughout the entire period, a parade of corrupt officials checked into prison, but only when their greed so far exceeded normal human boundaries that the prosecutors could no longer turn a blind eye.

When Mayer learned that the Department of Justice had charged New Jersey Democrat Senator Bob Menendez and his good friend Salomon Melgen with more than a dozen counts of political corruption, he said he wasn’t surprised: “Menendez [has] excelled in the dark parts of New Jersey politics” for years.

The scandal came to light back in 2015, which ultimately resulted in the Department of Justice charging Menendez and Melgen in a 68-page indictment. Among the charges: that Melgen, a wealthy eye doctor from the Dominican Republic practicing in Florida, gave hundreds of thousands of dollars to Menendez for his 2012 reelection campaign and trips on his private jet in exchange for political favors including massive intervention into changes in Medicare rules that helped Melgen avoid giving back some $9 million in excess reimbursements. Menendez also acted as Melgen’s “personal senator” in arranging travel visas for Melgen’s “girlfriends” from the Dominican Republic to “entertain” them at Melgen’s private estate.

The trial began eight weeks ago, with the jury listening to the testimonies from more than 50 witnesses and then being unable to come to a verdict. The jury apparently couldn’t tell the difference between the exchanges of gifts between good friends, and political bribery and payoffs. Said Judge William Walls, the Senior U.S. District Judge for New Jersey who has been involved in the case since it started:

I find that you [the jury] are unable to reach a verdict and that further deliberations would be futile and that there is no alternative but to declare a mistrial.

When the prosecution asked Judge William H. Walls to have the jury consider each of the dozen charges separately – called a partial-verdict instruction – Walls declined, holding that such a request would be futile: “Based upon what is so clearly and definitively written [by the jury], that would be a futile exercise.”  And then he added, “I can appreciate how disappointed you [prosecuting attorney Peter Koski] are.”

He was not the only one. Many had just assumed that because Menendez’s corruption went so deep and had lasted so long, he was almost certain to spend the rest of his days in jail. One cynical observer counted up the years on all the charges if he were convicted and concluded that he would have to outlive Methuselah in order to complete his sentence.

Among those disappointed was Bob Salera, spokesman for the National Republican Senatorial Committee, who said, upon hearing the news, “New Jerseyans are disgusted … if Bob Menendez chooses to run for re-election [in 2018], New Jerseyans will reject him.”

The case against Menendez certainly appeared sufficient to put him away: that Menendez intervened with Medicare in order to keep his friend from returning some $9 million in excessive reimbursements; that Menendez pressured federal officials to protect a port security contract held by a company in the Dominican Republic [Melgen is not only a citizen there but also a major investor in the company] from going out to bid; that Menendez was paid off by Melgen with various favors including trips on Melgen’s private jet (which he failed to report as required by the Senate) and making substantial high-six-figure contributions to his reelection campaigns; that Menendez bribed federal officials, committing fraud and making false statements in the process; and more.

But alas, the jury hung, and Menendez and Melgen went free. Menendez returns to Washington while Melgen returns to Florida where he faces sentencing after being convicted of 67 counts of defrauding Medicare.

Those suspicious that the judge was in on the decision will also be disappointed. Despite holding degrees from establishment schools Dartmouth and Yale and being appointed to the federal bench by President Bill Clinton in 1994, Walls, now 85, has earned a reputation for severe sentencing in political corruption cases like these. In 2015 Walls imposed a 70-month sentence on a Union County (N.J.) official who admitted stealing $120,000 from the county, writing at the time: “We the people of the United States are sick and tired of political and public officials being on the take.” When pressed by the defendant’s attorneys to be lenient, Walls rejected that request saying that he was tired of requests like that for “people who were corrupt in their public duty.”

No doubt Walls was disappointed too, with the jury not allowing him the opportunity to drop the hammer on Menendez and his friend. From the jury’s perspective, the two were just good old boys enjoying each other’s company and companionship while exchanging innocent gifts along the way. The jury seemed unable to distinguish between the giving of gifts and the buying and selling of political favors.

Just because the jury couldn’t make the distinction doesn’t mean that Menendez and Melgen are innocent.

Amazon: Shakedown: The Fleecing of the Garden State by Carl Mayer

This entry was posted on Monday, November 20th, 2017 at 6:25 am and is filed under Crime, Politics. You can follow any responses to this entry through the RSS 2.0 feed. Both comments and pings are currently closed.
Many of the articles on Light from the Right first appeared on either The New American or the McAlvany Intelligence Advisor.