Venezuela Falling Behind on Its Payments, Putting Maduro’s Regime in Jeopardy 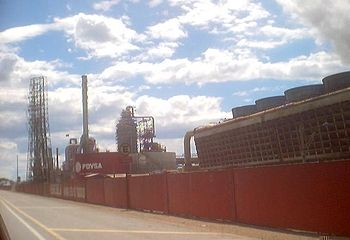 Venezuela failed to make five payments due on its debt last week in order to make a big payment on Friday and another one next Thursday. The $350 million in missed payments each have a 30-day grace period, while Friday’s payment of nearly $1 billion and another one of $1.2 billion due the following Thursday must be paid on time. Another $1.2 billion of principal and interest payments are due before the end of the year.

Venezuelan President Nicolás Maduro is running out of both time and money. With less than $10 billion in foreign reserves (and much of it illiquid), he is scrambling to keep from defaulting.

His state-owned energy company, PDVSA, is so far behind on payments to storage terminals in the Caribbean that it is being barred from using them until they get caught up. One such facility, NuStar’s Statia facility on the island of St. Eustatius, is owed $26 million by PDVSA, not having received any payments for nearly a year. PDVSA set up a payment schedule with NuStar but then missed the first payment. So NuStar is holding an auction of Venezuela crude that’s currently in storage in order to make up for those missed payments.

On top of that, quality control issues are plaguing PDVSA, thanks to shoddy performance by its workers, resulting in crude that is contaminated with water, soil, and other minerals. The situation has deteriorated over the past two years to such a point that refineries aren’t taking shipments, or are demanding discounts to offset the additional costs of refining the crude. One PDVSA worker told Reuters news agency, “We’re refitting chemical injection ports, recouping pumps and storage tanks but without chemicals, we can’t do anything.” Those chemicals cost money that PDVSA doesn’t have, and its suppliers aren’t willing to extend any further credit.

So far this year, Phillips 66 has canceled at least eight shipments due to the low quality of Venezuela’s crude being shipped to their refineries.

PDVSA provides 90 percent of Maduro’s revenues. The combination of low oil prices, expert workers at PDVSA being replaced two years ago with his political cronies, the resultant incompetence and corner-cutting to keep costs down, the barring by storage facilities of taking the company’s crude, the necessity of making those payments in the next two weeks, and the sanctions by the United States inhibiting Maduro and his people from accessing crucial funds are creating severe problems for him. The problems border on existential, with observers now estimating the chances of default somewhere between 15 and 40 percent before the end of the year. Said Ray Zucaro, chief investment officer at RVX Asset Management, Maduro’s “getting close to the edge of not [having] enough money in the checking account to pay the bills.”

There is one beneficiary enjoying Maduro’s problems: Russia. It is continuing to provide credit to the staggering and faltering communist regime in exchange for precious oil reserves. Helma Croft, global head of commodity strategy at RBC Capital Markets, explained the pickle Maduro is in and how Russia is taking advantage of it: “While it makes sense [for Maduro] to preserve as much cash to avoid default, [he] will not be able to do it without Russia. So the question will be: how much acreage will this cost [him]? Rosneft [Russia’s state-owned energy company] is acquiring Venezuela assets at fire sale prices.”

communist Energy oil Oil Prices
This entry was posted on Monday, October 23rd, 2017 at 8:55 am and is filed under Energy. You can follow any responses to this entry through the RSS 2.0 feed. Both comments and pings are currently closed.
Many of the articles on Light from the Right first appeared on either The New American or the McAlvany Intelligence Advisor.