This Thoroughbred is Just Beginning to Feel His Oats

This article was published by The McAlvany Intelligence Advisor on Friday, October 20, 2017: 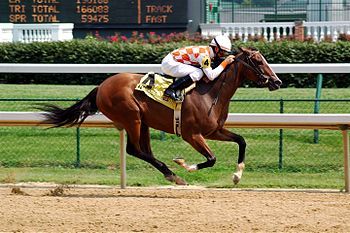 It’s tempting to push the analogy comparing the U.S. economy to a Thoroughbred horse too far. But it is tempting. The Thoroughbred breed began around the time of the Industrial Revolution, when an English mare was crossbred with an imported Oriental stallion with Arabian, Barb, and Turkoman breeding. All Thoroughbreds can trace their pedigrees to three stallions imported into England in the 17th century. They were exported to Australia, Europe, Japan, and South America during the 19th century, and today an estimated 100,000 Thoroughbred foals are registered worldwide every year.

A Thoroughbred is tall, slender, athletic, and built for competition, usually on racetracks. Among the most famous are Citation, Phar Lap, Old Rosebud, Whirlaway, Roamer, Seabiscuit, and Man o’ War.

And, of course, the United States economy.

Starting at around 1800, the U.S. economy grew at such a rate that in less than 100 years it overtook England in the value of goods and services produced in a year. Today the U.S. economy produces $20 trillion, while the United Kingdom produces just $2.6 trillion.

There was a time, in the late 1900s, when the U.S. economy was growing so fast that it would double its output every seven years.

Since then, inroads of the socialist state have slowed the U.S. economy significantly so that it now grows at 2 percent a year or less. There is substantial historical evidence to show that the slowing is deliberate, so that America can be “comfortably merged” with other nations into a totalitarian world government. For more on who first used that expression, see Sources below.

Through the succession of progressive administrations going as far back as Roosevelt (Teddy and Franklin), the American Thoroughbred has been hobbled, restrained, and weighed down with hundreds of pounds of lead weights in order to make the race “more fair.”

But now comes the promise made by President Donald Trump that he will remove some of the lead weights, reduce some of the restrictions, eliminate some of the unfair rules and regulations, and the U.S. Thoroughbred economy smells the elixir.

CNN – what writer Alex Newman calls the Communist News Network or the Clinton News Network – was forced to admit that Trump’s goal of letting the Thorougbred run so that it would grow by three or four percent a year was probably doable. Wrote CNN: “Even if the economy grows at a more modest 3% clip over the next few years, Trump will likely be able to take a victory lap.” Three percent growth in GDP is a 50 percent improvement over the Obama economy! Four percent growth would be a double!  And of course more jobs translate into more salaries to consumers who make up 70 percent of the economy.

Mainstream economists have consistently underestimated the strength of our Thoroughbred, who is beginning to enjoy the heady wine of fewer restraints and the promise of lower taxes. It appears that they continue to look through the rearview mirror in making their forecasts rather than through the front windshield where the racetrack is wide and firm and flat and inviting.

It’s too soon to celebrate such a victory as proposed by CNN, but our Thoroughbred has definitely left the gate. Investor sentiment (reflecting the outlook of those with capital to invest in the economy) has, according to the American Association of Individual Investors (AAII), shown investor optimism above its historical average six times already this year.

In addition, consumer sentiment – among those who spend the money – just hit a 13-year high, according to the University of Michigan. That sentiment index rose from 95 in September to 101 in October while its “current conditions” index – a measure of how people feel about their personal finances – jumped to 116 in October from 111 in September. The UofM expectations index – a measure of consumers’ outlook – vaulted from 84 in September to 91 in October, the highest seen by UofM since January, 2004. Richard Curtin, UofM’s director, said the latest survey “reflects an unmistakable sense among consumers that economic prospects are now about as good as could be expected.”

The latest report from the Department of Labor contained a number of surprises at how quickly our stallion has gained momentum. The first surprise is that new claims for unemployment insurance benefits last week fell to the lowest level in 44 years: “The advance figure … was 222,000 … the lowest level for initial claims since March 31, 1973.” The second surprise is that the number of continuing claims (those lasting more than a week) also fell to levels not seen since 1974.

The third surprise is that these numbers follow the wildfires in California and the devastating hurricanes Harvey, Irma, Jose, and Maria. They pushed new jobless claims during the last week of August to nearly 300,000, but our Thoroughbred is strong enough to absorb that hit with people rapidly returning to work, and the numbers returning to normal, in less than six weeks. Our Thoroughbred’s performance surprised the mainstream economists, who predicted jobless claims would be closer to 240,000 instead of the 222,000 reported by the DOL.

The next surprise is that today’s U.S. population is 53 percent larger than it was in 1973, and its workforce today is 80 percent larger, making the declines in new claims and continuing claims even more impressive.

Imagine for just a moment how our Thoroughbred stallion would perform if Trump is successful. Fewer regulations, lower taxes, greater incentives for investors with fewer restraints – why, the ripple effect (to change the metaphor) would be astounding. Remember that, without those socialist restraints piled onto our Thoroughbred over the past decades, our economy, instead of producing $20 trillion a year, would more likely be producing closer to $40 trillion.

History of the Thoroughbred Horse

More on who used the phrase “comfortably merged” here

communist Donald Trump Economy growth Jobs Obama progressive Regulations ripple effect slowing Taxes Unemployment Wall Street
This entry was posted on Saturday, October 21st, 2017 at 5:40 am and is filed under Free Market, History. You can follow any responses to this entry through the RSS 2.0 feed. Both comments and pings are currently closed.
Many of the articles on Light from the Right first appeared on either The New American or the McAlvany Intelligence Advisor.