Dow Crosses 23,000 for the First Time in History 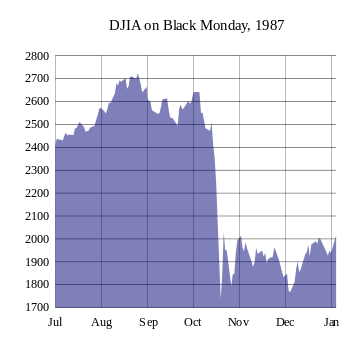 Performance of the Dow Jones Industrial Index during Black Monday

This article appeared online at TheNewAmerican.com on Tuesday, October 17, 2017:

The Wall Street Journal had no trouble finding money managers who were willing to comment positively on the news. Mark Freeman, chief investment officer and portfolio manager at Westwood Holdings Group (which invests $22 billion for its customers), told the Journal: “In the conversations I have with clients, I don’t have anyone telling me they’re euphoric. I view that as a positive.”

Jeremy Bryan, a portfolio manager at Gradient Investments (which manages $1.4 billion for almost 20,000 clients), added: “In the U.S. markets, there’s no question that valuations are elevated, but the general economy is going really well.”

The Journal failed to elicit comments from a “perma-bear,” Michael Snyder, who has been decrying the market’s overvaluations and excessive ebullience for months:

As I have written about so frequently in recent months, our financial markets are even more primed for a crash than they were in 2008 [the start of the Great Recession], and we have received warning after warning that stock evaluations are ridiculously inflated and must come down at some point….

The truth is that we are in the terminal phase of the greatest debt bubble in human history, and all over the planet prominent names in the financial world are warning about what is just around the corner.

Snyder then builds his case by interviewing other bears who agree with him, including outgoing German finance minister Wolfgang Schauble, and another bear, James Rickards. Concluded Snyder:

I definitely concur with James Rickards. A major financial crisis “is certainly coming,” and because of all the irrational optimism that we are witnessing at the moment most Americans will be completely and utterly blindsided by what is ahead.

As that great seer and futurist Yogi Berra famously intoned, “It’s tough to make predictions, especially about the future.” But what can be done is make comparisons between today’s market and what occurred almost exactly 30 years ago to the day: Black Monday, October 19, 1987.

Black Monday has a number of connotations and often refers to Monday, October 28 (and the next day, Black Tuesday), 1929, which occurred after Black Thursday, October 24, which started the long decline in stocks that ended with a whimper in July 1932 after stocks had lost 89 percent of their value.

Since then the Dow has, thanks to a growing economy and monetary stimulus by the Federal Reserve, grown 10-fold. While nothing on the horizon looks like that bad weekend in 1987, there are plenty of potential spoilers that could be a trigger: “Rocketman” in North Korea; the Iranian nuclear crisis that is heating up again; the $20-plus trillion debt hanging over the U.S. economy; the continuing defamation by the mainstream media of the president; George Soros’ intention, funded by his billions, to turn the United States into a vassal state severed from its constitutional moorings; and so on.

If this did happen — once again, this is not a prediction — it’s helpful to remember that investors treated the Black Monday 1987 selloff as a buying opportunity and it wasn’t long before the market was back on track with the Dow hitting new highs once again. Such a selloff today, if it did happen, would not mark the end of the world but just the end of one of the most remarkable bull market runs in history.

bubble Constitution Economy Federal Reserve George Soros Great Recession inflate S&P 500 Index stocks Wall Street
This entry was posted on Wednesday, October 18th, 2017 at 5:39 am and is filed under Economics, History. You can follow any responses to this entry through the RSS 2.0 feed. Both comments and pings are currently closed.
Many of the articles on Light from the Right first appeared on either The New American or the McAlvany Intelligence Advisor.