This article appeared online at TheNewAmerican.com on Wednesday, October 11, 2017: 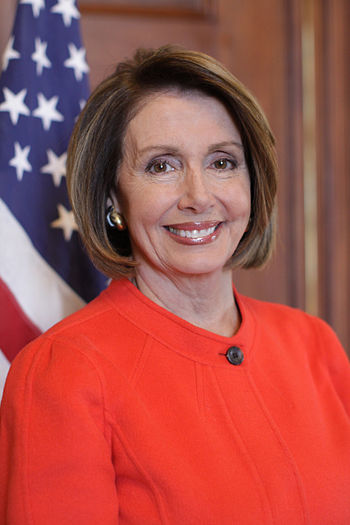 Following the ghastly shooting in Las Vegas, a retired Marine captain and gun store owner confronted Senator Nancy Pelosi (D-Calif.) at a town hall meeting and asked her what sort of gun control measures could be implemented in the future to keep someone such as Stephen Paddock from murdering innocent civilians in the future. Pelosi said the present NCIS (National Instant Criminal Background Check System) is working just fine:

But of course even a great system such as NCIS can be improved by expanding those background checks to include every private gun transaction between every private citizen, just to make sure the government knows everything. Said Pelosi: “We’re never going to rest until we get this done.”

The only trouble is that those “bipartisan” efforts didn’t keep Paddock from legally purchasing dozens of firearms. He passed every one of those carefully crafted federal background checks in the process.

But Brady Campaign President Dan Gross stated last November that since the implementation of the National Instant Criminal Background Check System (NICS) in 1968, more than three million gun sales have been stopped:

It’s irrefutable proof that Brady background checks work, that they have made America safer by keeping guns out of the hands of violent criminals, domestic abusers, and dangerously mentally ill people — the people we all agree shouldn’t have guns.

While his group’s “proof” may not be irrefutable as he didn’t provide sources for his claim, it is irrefutable that those who tried to purchase a firearm since 1968 and were denied had their constitutional rights violated. Without due process, without any opportunity to refute the decision by an unnamed federal employee buried in a cubicle somewhere in Washington, D.C., millions have had their rights denied. The system is often cumbersome and slow, requiring many man hours by gun shop owners to make the tens of millions of phone calls every year to verify if a customer is OK to purchase a firearm. And the risk of creating a permanent federal database of Americans legally owning firearms remains a threat if not already a fact.

Alan Korwin, who calls himself a journalist “ombudsman” for the Second Amendment, is not nearly so kind:

Not a single reporter in the entire profession has the brains, training or ethics to ask even the most obvious question … where are the three million arrests?

The background check is worse than a lie; it’s a travesty. For those three million denials, prosecutions are extremely rare, in the low two digits annually, [and] convictions are apparently not even routinely tracked….

[The NCIS] destroys due process, plays “find and release” with criminals, can’t distinguish between the guilty and the innocent, and wastes scarce funds.

Does Korwin, who also writes for GunLaws.com, have a better answer? Short of ending NCIS altogether and allowing the citizenry and states to determine just how to handle problems such as these, just as they were handled in the years before both the Gun Control Act of 1968 and the Brady Bill in 1994 became effective, he does: It’s called BIDS — the Blind ID System.

BIDS, instead of gathering names and private information of millions of innocent people and then storing it in some vast federal database, would simply provide gun dealers with a current list of those already determined to be denied the right to purchase a firearm. It would allow those holding a Federal Firearms License (an FFL) access to an encrypted database through a frequently changed password, with a query option. The information would be provided by the FBI. A brief search by the dealer would reveal if his potential purchaser is on the list, or not. Go, or no go.

BIDS, if implemented in place of the NCIS, would greatly improve privacy, eliminate the creation of a massive database of law-abiding gun owners, and end a massive bureaucracy funded with tax dollars taken from the very people whose names are currently being stored.

The differences between the two systems are remarkable:

A BIDS check would be performed by the gun dealer instead of by a federal employee under NCIS;

The cost of a BIDS check would be infinitesimally small compared to the costs of maintaining the NCIS infrastructure: computers and their ongoing repairs, maintenance and upgrades, office space for the thousands of agents taking calls from gun dealers, personnel management and administration expenses, health and retirement benefits, and so forth.

Most importantly, the government does not learn who owns a firearm or who is trying to purchase one under BIDS. The dealer would not be required to keep records, open to drop-in visits by agents of the BATFE under the current NCIS.

BIDS was briefly considered by Congress back in 2001, but it never gained traction. There apparently was simply too much interest on the part of Congress in wanting the government to know where all the guns were and where their owners lived. There weren’t enough congressmen who understood or appreciated how precious rights of innocent citizens were put at risk by implementing a system that wouldn’t have tagged real criminals such as Stephen Paddock in the first place.

Is now the time for another hard look at the Blind Identification Database System as an alternative to the NCIS? Surely the Democratic senator from California wouldn’t object.

BATFE Constitutional FBI firearms Gun Control guns mentally ill Nancy Pelosi Privacy rights Second Amendment threat Washington
This entry was posted on Wednesday, October 11th, 2017 at 11:52 am and is filed under History, Second Amendment. You can follow any responses to this entry through the RSS 2.0 feed. Both comments and pings are currently closed.
Many of the articles on Light from the Right first appeared on either The New American or the McAlvany Intelligence Advisor.