Jump in Jobless Claims Following Harvey Is Just the Beginning

This article appeared online at TheNewAmerican.com on Thursday, September 7, 2017: 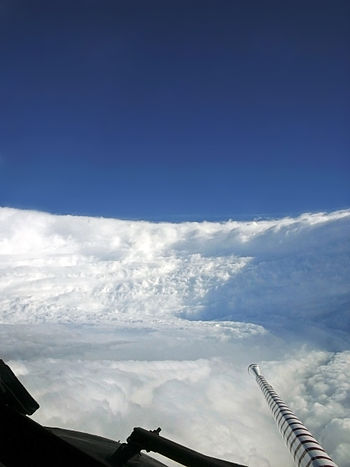 View of the eyewall of Hurricane Katrina taken on August 28, 2005 as the storm made landfall on the United States Gulf Coast.

The jump in unemployment claims for the week ending September 2, as reported by the Department of Labor (DOL) on Thursday, not surprisingly exceeded economists’ consensus of just 241,000. The increase of 62,000 for the week to 298,000 nearly broke a claims record that has been in place for 131 weeks: 300,000.

That record will surely be broken in the weeks to come. The unemployment claims are just beginning to come in, and they are a predictor — a proxy — for job layoffs. Some workers simply cannot get to their jobs. Others who can are finding no work for them. And mostly those with skills in cleanup, restoration, and reconstruction will be in high demand for the foreseeable future.

That one-week jump is the largest since November 2012, following Hurricane Sandy (“Superstorm Sandy”) in 2012. That hurricane was the largest Atlantic hurricane in recorded history, killing 233 people and causing about $75 billion in damage. And Sandy was preceded by Hurricane Katrina in 2005 which inundated New Orleans, killed 1,245 people and caused damage estimated at $108 billion.

Jobless claims from Harvey “will rocket over the next couple of weeks,” said Ian Shepherdson of Pantheon Macroeconomics, “as people who have lost their job as a result of Hurricane Harvey file for unemployment benefits.” He noted that jobless claims jumped by 96,000 in the week after Katrina and “the population of the New Orleans metro area is only about one fifth that of Houston.”

In the short run, the present and future expected jump in jobless claims will interrupt the long slow decline in unemployment that has been taking place since 2010. In the long run those claims could reach new highs as Hurricane Irma — which became a Category 5 hurricane on Tuesday and recorded one of the longest durations of Category 5 strength winds on record — roars toward Miami, Florida.

After causing catastrophic damage in Barbuda, St. Barthelemy, St. Martin, Anguilla, and the Virgin Islands, Irma had already caused the deaths of 10 people by Thursday noon.

The losses that might be incurred by Miami could easily dwarf those sustained by Houston, for at least two reasons. First, Miami’s population is more than twice that of Houston’s (5.5 million versus 2.3 million); and second, Houston is 80 feet above sea level while Miami’s elevation above sea level is just six feet.

The ripple effect could radiate outward to impact the entire southeast part of the country, stalling the national economy in the third quarter and perhaps even the fourth quarter. Economists were cheered that GDP growth (on an annual basis) in the second quarter touched 3 percent, and Wall Street has reacted accordingly. Since the first of the year, stocks, as measured by the S&P 500 index, have gained 8.5 percent, on pace to return more than 12 percent for the year.

But with Houston barely beginning to recover from Harvey, and Miami hunkering down for Irma’s onslaught, that number may turn into wishful thinking.

Add to that Hurricane Jose, which has just begun to boil as it moves through the Atlantic Ocean and is already rated a Category 1, putting the Caribbean islands of Antigua and Barbuda on hurricane watch.

In addition are those Wall Street prognosticators watching the CAPE, Robert Shiller’s favorite index, for indications that stocks may be overvalued. CAPE is the “cyclically adjusted price-to-earnings” ratio, which is used to compare present valuations to past history. Although not intended as a market timing tool, it has a history of high valuations being followed by sharp market corrections. Today Shiller’s CAPE is at a level comparable to the level it achieved just before the 1929 stock market crash.

Just for the record, stocks began their long selloff in October 1929, rebounding briefly in April 1930 and then falling further until July 1932 when they touched bottom after losing 89 percent of their value.

All of which is only to say that Harvey, followed by Irma, possibly followed by Jose, could be the triggers for a slowing of the U.S. economy and a decline in stocks that many say is long overdue.

Economy GDP growth impact Jobs ripple effect S&P 500 Index slowing stocks Unemployment Wall Street
This entry was posted on Friday, September 8th, 2017 at 5:13 am and is filed under Economics, History. You can follow any responses to this entry through the RSS 2.0 feed. Both comments and pings are currently closed.
Many of the articles on Light from the Right first appeared on either The New American or the McAlvany Intelligence Advisor.