This article appeared online at TheNewAmerican.com on Wednesday, September 6, 2017: 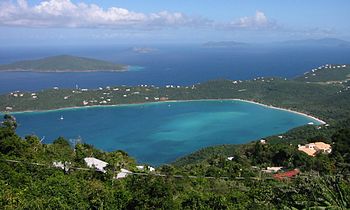 In anticipation of the arrival of Hurricane Irma, U.S. Virgin Islands Governor Kenneth Mapp on Tuesday ordered the Islands’ National Guard to “seize arms, ammunition, explosives, incendiary material and any other property that may be required by the military forces for the performance of this emergency mission.”

More chillingly, Governor Mapp has ordered his adjutant general, Deborah Howell, “to take whatever actions she considers necessary to carry out the assigned mission,” presumably actions that could end the lives of anyone resisting the Guard’s demands.

This is “necessary to maintain or restore order, and to guarantee the safety of life and property” adds the order, with nothing said about the safety of the lives of those who think the Vitter Amendment protects them from such seizures.

The Vitter Amendment, otherwise known as the Disaster Recovery Personal Protection Act of 2006, was passed following the order of the mayor of New Orleans to confiscate firearms in the wake of Hurricane Katrina.

David Codrea, writing for Oathkeepers, called this order by the Islands’ governor a “setup for the unconstitutional seizure of Hurricane Katrina all over again. Presumably, if a citizen defies the guard, the escalation of force up to and including lethal will be authorized and ‘legal.’”

Chris Cox, the executive director of the National Rifle Association (NRA), fired off a protest of the threatened illegal and unconstitutional action:

People need the ability to protect themselves during times of natural disaster. This dangerous order violates the constitutional rights of law-abiding citizens and puts their lives at risk. When 911 is non-existent and law enforcement personnel are overwhelmed with search-and-rescue missions and other emergency duties, law-abiding American citizens must be able to protect their families and loved ones. The NRA is prepared to pursue legal action to halt Gov. Mapp’s dangerous and unconstitutional action.

Grant the point that at the moment Irma looks like it will be of historic proportions, potentially one of the five worst hurricanes in recorded history. Grant the point that the governors of Puerto Rico and the state of Florida have already declared states of emergency in anticipation of Irma’s landfall. Grant the point that Irma could dump upwards of 10 inches of rain on the islands, accompanied by winds of 40 to 50 mph with gusts up to 60 mph.

What isn’t clear is whether the American citizens living in the U.S. Virgin Islands have full protection of the Constitution and its attendant Bill of Rights. That question has been open ever since the United States purchased the islands from Denmark in 1916 for $25 million in gold. At the time, the islands were, and remain to this day, considered to be “organized unincorporated United States territory.”

In 1997, the chairman of the House Committee on Resources asked the General Accounting Office (GAO) to clarify just how the U.S. Constitutional applies to various “U.S. Insular Areas,” including the U.S. Virgin Islands. Its findings were inconclusive and unsettling, especially to those now living under Governor Mapp’s orders. Said the report:

Under the Insular Cases and subsequent decisions, rights other than fundamental rights, even though they may be stated in the Constitution, do not apply to the territories or possessions unless the Congress makes them applicable by legislation. The Congress can by law extend the coverage of the Constitution in part or in its entirety to a territory or possession, and has done so with respect to some territories. In the absence of such congressional action, however, only fundamental rights apply.

Digging further, one finds that only parts of the Fifth Amendment are considered to be “fundamental” based on court rulings, and none of the Sixth Amendment applies. And nothing is said in the 75-page report about the Second.

If the NRA sues Mapp, and if the court sustains the NRA’s complaint that the islands’ citizens — considered to be American citizens under the 1916 treaty — are having their Second Amendment-protected rights violated, then the issue dating from 1916 will be settled. Until then, however, American citizens living in the Virgin Islands will find themselves being disarmed by the National Guard, and resistance could be met with potentially lethal force.

ammunition Bill of Rights Constitution Fifth Amendment firearms NRA resistance Second Amendment Treaty unconstitutional
This entry was posted on Wednesday, September 6th, 2017 at 3:42 pm and is filed under History, Second Amendment. You can follow any responses to this entry through the RSS 2.0 feed. Both comments and pings are currently closed.
Many of the articles on Light from the Right first appeared on either The New American or the McAlvany Intelligence Advisor.