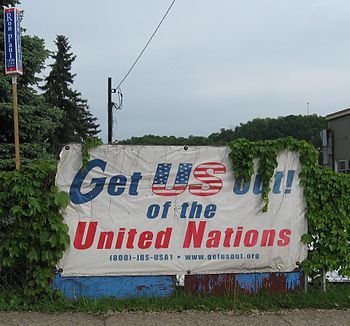 Sign from the John Birch Society advocating US withdrawal from the United Nations , with Ron Paul sign in background,

This article and video were posted online at TheNewAmerican.com  on Wednesday, August 30, 2017:

In this video, The New American exposes how globalists such as Condoleeza Rice of the Bush administration use incredibly dishonest tactics to smear patriots in general and the John Birch Society in particular. After the violence in Charlottesville, Rice attacked JBS and sandwiched it between the KKK and Nazis–something she knows very well is absurd. In fact, JBS has always represented exactly the opposite: opposition to racism and anti-Semitism, prominent Jewish and black leaders and members, support for liberty, opposition to National Socialism and all forms of socialism, and more. On the other hand, Rice, who helped get America involved in the illegal and disastrous wars that led to the genocide of Christians in the Middle East, served under a president whose own family was literally involved in helping to finance the Nazi war machine. Rice is a member of the globalist swamp known as the Council on Foreign Relations, which the JBS has been very effective in exposing. That is why she uses dishonesty to smear the Birchers. But patriots should be encouraged: If there was any legitimate criticism of JBS, she would have used that instead of dishonesty. By contrast, the JBS uses only the truth and the facts. Join us today!

attack Council on Foreign Relations facts global John Birch Society media National Socialism smear Socialism The New American truth
This entry was posted on Thursday, August 31st, 2017 at 6:23 am and is filed under Education, History. You can follow any responses to this entry through the RSS 2.0 feed. Both comments and pings are currently closed.
Many of the articles on Light from the Right first appeared on either The New American or the McAlvany Intelligence Advisor.