This article was published by The McAlvany Intelligence Advisor on Monday, August 28, 2017: 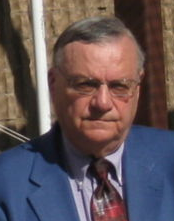 There’s little doubt that sheriffs in counties on or near the country’s southern border have been watching, and waiting, for a signal from the Trump administration about its views on enforcing immigration laws. Those would especially include those who consider themselves “constitutional” sheriffs.

That signal arrived late Friday with President Trump’s pardon of Maricopa County Arizona’s Sheriff Joe Arpaio. Before Friday, all those sheriffs had to go on was hope – hope that they wouldn’t be targeted for enforcing the law the way Arpaio was. Now they can rest easier knowing they have a friend in the White House and not an enemy. And the net effect will be stronger enforcement of the country’s immigration laws.

For Arpaio it was a long-awaited victory over the Obama administration. For the citizens of the United States it is also a victory over illegals committing crimes without consequences.

Throughout his time as sheriff, Arpaio continued his life’s work of protecting the public from the scourges of crime and illegal immigration. Sheriff Arpaio is now 85 years old, and after more than 50 years of admirable service to our nation, he is worthy of a presidential pardon.”

For his part, the sheriff was grateful but called his conviction the result of unceasing efforts by the Obama administration to silence him:

[I am] humbled and incredibly grateful to President Trump. I look forward to putting this chapter of my life behind me….

[I thank President Trump for] seeing my conviction for what it is: a political witch hunt by holdovers from the Obama administration.

The “witch hunt” began with the filing of a lawsuit against Arpaio by one Manuel de Jesus Ortega Melendres, who claimed that the sheriff exceeded his authority by conducting raids and traffic stops based on race. Arpaio said he was acting within his authority: during those raids and traffic stops he required his deputies to ask, along with other information, their immigration status. Most of those stopped were found to have false or fake identification, which was enough for the sheriff to incarcerate them and notify ICE (Immigration and Customs Enforcement) officials. His philosophy was simple: remove them from the county before they committed more crimes. As Arpaio expressed it: “Ours is an operation where we want to go after illegals, not the crime first. It’s a pure program. You go after them, and you lock them up.”

This was too much for U.S. District Court Judge Murray Snow, who ruled in 2013 in a “findings of fact and conclusions of law” that Arpaio and his sheriffs were using race as one of the determinants upon which those raids and traffic stops were based. A George W. Bush appointee, Murray ruled that what Arpaio and his deputies were doing was unconstitutional:

It is not a violation of federal criminal law to be in this country without authorization in and of itself. Thus, the MCSO [Maricopa County Sheriff’s Office]’s policy that requires a deputy (1) to detain persons she or he believes only to be in the country without authorization, (2) to contact MCSO supervisors, and then (3) to await contact with ICE pending a determination [on] how to proceed, results in an unreasonable seizure under the Fourth Amendment to the Constitution….

Thus, to the extent [the department] uses race as a factor in arriving at reasonable suspicion or forming probable cause to stop or investigate persons of Latino ancestry for being in the country without authorization, it violates the Fourth Amendment. In addition, it violates the Plaintiff class’ right to equal protection under the Fourteenth Amendment to the Constitution and Title VI of the Civil Rights Act of 1964.

While the case was being litigated, Arpaio continued the policy, claiming what he was doing was legal. But on July 31, U.S. District Court Judge Susan Bolton, a Clinton appointee, found Arpaio guilty of willfully violating a court order issued by Snow:

Not only did Defendant [Arpaio] abdicate responsibility, he announced to the world and to his subordinates that he was going to continue business as usual no matter who said otherwise.

Bolton, who was nominated to the district court in 2000 by former President Bill Clinton, has been a thorn in the side of the Arizona legislature’s attempts to support police efforts to identify illegal aliens within the state. On July 28, 2010, she issued a ruling blocking key portions of SB 1070, which gave the state the authority to effectively enforce immigration laws, allowing its state troopers to crack down on illegal immigrants.

When Arpaio tried to appeal and demand a trial by jury, Bolton denied it on the grounds that the law did not require juries in cases where the potential jail term [six months] was so short.

Reactions to the pardon were predictable. Arizona Senator John McCain, ever the clever politician doing the two-step in his attempt to keep everyone happy, said: “The president has the authority to make this pardon, but doing so at this time undermines his claim for the respect for rule of law as Mr. Arpaio has shown no remorse for his actions.”

On the other hand, Arizona Rep. Andy Biggs – a constitutionalist with a Freedom Index rating of 80 (McCain’s is a dismal 62) – praised Trump for issuing the presidential pardon: “Sheriff Joe Arpaio made many enemies in the judicial system, the media, and the left because he enforced laws that the federal government [under Obama] ignored.”

Arizona Governor Doug Ducey added his praise to the decision to pardon the sheriff: “The president clearly has pardoning powers under the United States Constitution and with this action he has brought finality to this chapter in Arizona’s history. Sheriff Joe is my friend and now he, Ava, and their family can move on and enjoy their retirement together.”

On the left, the declamations were also predictable. Said Josselyn Berry, the executive director of Progress Now Arizona, “It’s unbelievable. It’s 5 o’clock here in Arizona on Friday in the middle of a category 5 hurricane in Texas – I think it’s the definition of a Friday news dump. It’s pretty cowardly to dump that right now,” while Phoenix’s Democrat May Greg Stanton tweeted that Arpaio “illegally targeted and terrorized Latino families. Our community voted him out of power. Donald Trump can’t change that.”

Of course, Mayor Stanton didn’t mention that “our community” had a little help from totalitarian billionaire George Soros, who poured $2 million into the campaign of Paul Penzone, who beat Arpaio in his seventh – seventh! – reelection bid last November. Said Soros spokesman Michael Wachon:

We made a major investment in the effort to defeat Joe Arpaio for two reasons. First, Joe Arpaio has been a stain on the justice system in Arizona for more than two decades, violating civil rights and abusing his office.

Second, his influence on the national conversation about immigration has been poisonous.

Coming from Soros, that’s a compliment. And the pardon sends a signal that “constitutional” sheriffs have been waiting for: they have a friend in the White House who supports them as they work to uphold and enforce immigration laws.

Bill Clinton consequences Constitution Crime Donald Trump Fourteenth Amendment Fourth Amendment Freedom George Soros George W. Bush Illegal Immigration John McCain media Obama rights sheriffs Texas
This entry was posted on Monday, August 28th, 2017 at 9:56 am and is filed under Crime, Politics. You can follow any responses to this entry through the RSS 2.0 feed. Both comments and pings are currently closed.
Many of the articles on Light from the Right first appeared on either The New American or the McAlvany Intelligence Advisor.