This article appeared online at TheNewAmerican.com on Wednesday, August 23, 2017: 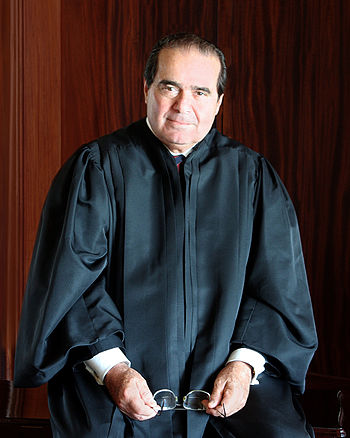 Antonin Scalia, former Associate Justice of the Supreme Court of the United States

The Second Amendment Foundation (SAF) and the Cato Institute, along with the National Sheriffs’ Association and the Independence Institute, filed a “friend of the court” brief on Monday urging the Supreme Court to take under review a lower court’s decision upholding Maryland’s nearly total ban on so-called assault weapons.

Prior to passage of the Firearms Safety Act (FSA) in 2013, Maryland’s gun controls were bad enough: The law permitted those citizens “in good standing” to possess semi-automatic rifles, but only after passing an extensive (and costly) background check along with meeting various other requirements. Starting October 1, 2013, those controls became positively onerous: Any firearm designated as an “assault weapon” was banned from private possession altogether. The law included “assault long rifles,” “assault pistols,” and “copycat weapons.” That automatically included the semi-automatic (one squeeze of the trigger fires a single round) rifles that are most popular among Americans, including Marylanders, including the AR-15 and AK-47 models and knockoffs.

Stephen Kolbe, a life-long resident of Maryland living in Towson, owned a “full-size semi-automatic handgun” but wanted, for self-protection purposes, to purchase one of those now-banned semi-automatic rifles. Under the new law he couldn’t, and so he, with the help of the SAF, filed suit claiming Maryland’s new law violated his Second Amendment-protected rights. He also claimed that by giving LEOs an exception, the law also violated his rights under the equal protection clause of the 14th Amendment.

His suit was rebuffed, and he kept appealing until the U.S Court of Appeals heard his case. When it ruled in favor of Maryland, he, with the assistance of the SAF and the others, decided to ask the Supreme Court to hear his case.

Alan Gottlieb, SAF’s founder and executive VP, explained why his organization is involved:

Our interest in this case is guided by the belief that government cannot prohibit whole classes of firearms, including semi-automatic sport-utility rifles that are in common use by private citizens and civilian law enforcement.

But in Maryland they want to do exactly that. It’s almost as if they [Maryland’s politicians] don’t understand Heller [wherein the Supreme Court ruled in 2008 that the Second Amendment guarantees an individual’s right to possess a firearm], or are deliberately ignoring what was explained clearly by the late Justice Antonin Scalia [in that decision].

The brief expands on Kolbe’s argument: “Maryland’s firearm and ammunition restrictions stem from a misunderstanding of firearms that are in common use by citizens and law enforcement agencies. Most sheriffs and deputies carry semi-automatic handguns with magazines larger than 10 rounds that are banned in Maryland; many patrol vehicles carry a rifle that is banned in Maryland.”

But misclassifying the popular semi-automatic rifle as an “assault weapon,” something designed to wreak widespread havoc and mayhem on a field of battle, has consequences: “Classifying typical sheriffs’ arms as ‘weapons of war’ alienates the public from law enforcement. Among the many harmful consequences: when a deputy uses deadly force, people will say that he or she used a military weapon. This is inflammatory, and false.”

Of course it would not be “people” in general saying such things, but the mainstream anti-gun media who would love nothing more than to pursue to completion their objective: The complete disarming of every American citizen. That objective could be supported further by alienating police officers from the public and by pushing for similar laws to be adopted by other states.

David Kopel, an attorney with the Independence Institute, went further, saying that the lower court misinterpreted Heller in order to support Maryland in the suit:

The Fourth Circuit extrapolated from a shred of the landmark 2008 District of Columbia v. Heller case, suggesting that weapons “most useful in military service — M-16 rifles and the like” could be banned.

From that squib, the court decided that the test for whether a class of weapons could be banned was whether it is “like an M-16.” That … contravenes the core of Heller — that all weapons in common lawful civilian use are constitutionally protected.

Kopel added that Maryland’s new law is so egregious that it is unique in the United States:

Today the majority of firearms sold in the United States for self-defense are prohibited in Maryland. The Fourth Circuit erred in upholding this denial of Marylanders’ constitutionally protected arms. This law was particularly egregious in its outright banning of common semi-automatic arms — and there exist no similar laws in other jurisdictions…. Maryland’s law is unconstitutional on its face and the Fourth Circuit’s reasoning in upholding it lacks legal or historical foundation. The Supreme Court should take up Kolbe v. Hogan when it returns from its summer recess.

The underlying problem is that Maryland’s constitution has no protection for its citizens similar to the Second Amendment to the U.S. Constitution, and for years politicians in Maryland have made laws that suited their ideology without such restraint. Except for the 14th Amendment, which now applies the Second Amendment to the states, those politicians would no doubt continue to make life difficult for Marylanders seeking to exercise their right to self-defense by completely banning their use of weaponry that would aid them in exercising that right.

When the Supreme Court resumes its work in October, Kolbe v. Hogan is just one of many cases it will be urged to consider. So far, the high court has been unwilling to clarify several issues left open in both Heller and its 2010 ruling in McDonald v. City of Chicago. At some point, perhaps sooner rather than later, the court will have to hear one or more of these cases on appeal and begin to resolve those issues.

Antonin Scalia assault weapons Cato Institute consequences Constitution David Kopel firearms Gun Control ideology rights Second Amendment sheriffs Supreme Court
This entry was posted on Thursday, August 24th, 2017 at 5:55 am and is filed under Second Amendment. You can follow any responses to this entry through the RSS 2.0 feed. Both comments and pings are currently closed.
Many of the articles on Light from the Right first appeared on either The New American or the McAlvany Intelligence Advisor.