This article appeared online at TheNewAmerican.com on Thursday, August 3, 2017: 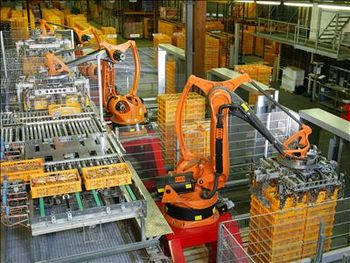 Factory Automation with industrial robots for palletizing food products like bread and toast at a bakery in Germany,

SAM, the Semi-Automated Mason, can be seen on YouTube laying bricks alongside human masons. While SAM can, according to contractors, lay around 2,000 bricks a day compared to an average of 600 to 700 for a human mason, the video illustrates a key point missed by many: It shows human workers programmming SAM and providing it the bricks and mud and following behind cleaning up after it. In other words, SAM, produced by Construction Robotics, isn’t replacing masons, it is making them more efficient and saving their backs.

A year ago, Rick Cohen, the founder of Symbotic LLC, which develops autonomous robots for warehouses, said, “What we’re doing with autonomous bots is not that dissimilar from what Google is doing with autonomous cars. I think within five years, it’ll change distribution.” Cohen was off by four years. At the time, he said that consumer-product retailers such as Amazon were having a hard time trying to automate even simple procedures such as teaching robots to pick products off a shelf and then assembling them onto a pallet for shrink-wrapping and shipping. But not only have those robots been developed, they are revolutionizing warehouse operations for Saks Fifth Avenue’s owner Hudson’s Bay Company and Chinese online-retail giant JD.com Inc. The software has become so sophisticated that robots not only can find, select, grab, and move gadgets, toys, and other consumer products, they can do so twice as fast as human workers.

But this isn’t causing the warehouse layoffs that people have been warning about for years. Instead, just since Cohen’s pronouncement, warehouse employment has increased from 867,300 to nearly 950,000. How is that possible? Part of the answer, of course, is the enormous growth in online sales, which hit $390 billion last year, nearly twice as much as in 2011. Another part of the answer is that as warehouse operators are cutting costs, prices to the consumer have been dropping as well. And this is allowing a fundamental economic law to function: When the price of something is reduced, more is demanded.

Robots are reducing the three biggest costs in warehousing, i.e., labor, time, and real estate. The new robots take up less space: Robots that are 28 inches wide allow the 10- to 12-foot wide aisles (originally designed for humans on forklifts) to shrink, allowing for more product to be stored. Some of them move at 25 miles an hour, faster than most humans can run and faster than forklifts are driven in warehouses. They rely on sensors so sophisticated that each knows where the others are, so they avoid crashes. As a result, existing warehouses are much more efficient, and new ones are being built smaller at much lower costs. Symbotic’s Cohen says its ARs (autonomous robots) are allowing food retailers and wholesalers to cut their distribution center labor costs by a jaw-dropping 80 percent, while operating in warehouses that are 25 to 40 percent smaller.

The next generation of robots is already here: “collaborative” robots. They work alongside warehouse workers, telling them where products are located, boosting worker productivity without breaking the bank. Others are designed to fetch the products and bring them to the worker’s table. These CRs are small and relatively cheap — tens of thousands of dollars compared to miles of conveyor belts and other automated systems that can cost tens of millions of dollars. A semi-conductor warehouse in Livermore, California, for example, using robots from Fetch Robotics, can handle 30 to 50 percent more items in about half the time when compared to the previous setup.

All of this raises the eternal question: What will all those being put out of work do to keep bread on the table? Jerry Kaplan, writing in the Wall Street Journal, has the answer: They will find other, higher-paying jobs as a result of the continuing and accelerating robotic revolution. “Robots aren’t mechanical people,” Kaplan notes. “They are a new wave of automation and, like previous waves, they reduce the need for human labor [the average warehouse worker can walk up to 20 miles and lift 50,000 pounds during a single shift]. In doing so, they make the remaining workers more productive and their companies more profitable. These profits then find their way into the pockets of employees, stockholders and consumers through lower prices. This newfound wealth, in turn, increases demand for products and services, compensating for lost jobs by employing even more people.”

Kaplan reminds us that “57% of the jobs that workers did in 1960 no longer exist today,” asking if anyone remembers office clerks, secretaries, telephone operators, bowling alley pin-setters, elevator operators or gas jockeys. He goes on to point out the obvious: With more money to spend, consumers will find ways to spend it. Which bodes well for “premium” services such as personal care where face-to-face interaction and demonstrations of skill (art, entertainment, massages etc.) are offered. Kaplan asks: “What will we do with that extra money? Spend it, of course — on vacations, clothes, restaurant dinners, concert tickets, spa days and more. That means increased demand for flight attendants, hospitality workers, tour guides, bartenders, dog walkers, tailors, chefs, ushers, yoga instructors and masseuses.”

Google growth Jobs profit YouTube
This entry was posted on Friday, August 4th, 2017 at 5:16 am and is filed under Free Market. You can follow any responses to this entry through the RSS 2.0 feed. Both comments and pings are currently closed.
Many of the articles on Light from the Right first appeared on either The New American or the McAlvany Intelligence Advisor.