This article appeared online at TheNewAmerican.com on Wednesday, July 26, 2017: 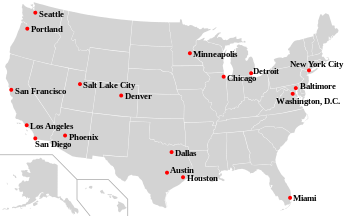 U.S. Attorney General Jeff Sessions upped the ante on sanctuary cities on Tuesday by declaring that any state not complying with requests concerning illegal immigrants held in local jails will lose federal grant money. He stated:

So-called “sanctuary” policies make all of us less safe because they intentionally undermine our laws and protect illegal aliens who have committed crimes.

This is what the American people should be able to expect from their cities and states, and these long overdue requirements will help us take down MS-13 and other violent transnational gangs, and make our country safer.

The Justice Department modified its initial request following a ruling by the Massachusetts Supreme Court on Monday declaring that the federal government couldn’t order the state to hold suspects in jail after they had served their sentences for the crime they had committed. Said the court:

There is no federal statute that confers on State officers the power to make this kind of an arrest.

So Sessions changed the request to let local authorities tell ICE 48 hours in advance of a suspect’s release so their agents can come to the jail to interview him.

President Donald Trump emphasized the revised policy of Sessions during a rally in Youngstown, Ohio, where he spent time describing graphically what some violent gang members who are in the United States illegally are doing to their kidnapped young female captives before killing them:

These are the animals that we’ve been protecting for so long. Well, they’re not being protected any longer, folks. And that is why my administration is launching a nationwide crackdown on sanctuary cities.

A federal court has ruled that, when it comes to funds provided to cities under the Byrne Justice Assistance Grant program, the Trump administration has the power to withhold those funds from local jurisdictions that aren’t following the Justice Department’s guidelines. Specifically, in addition to asking local authorities to notify ICE 48 hours prior to release of a suspect, the government wants to be able to send DHS agents into the local jails to interview suspects prior to their release in order to determine their immigration status.

Some cities are already changing their stance as sanctuary cities. For example, officials in Austin, Texas, said that they may have to start complying with federal immigration enforcement because they rely on the millions in federal grant money to fund their local law-enforcement efforts. The Byrne JAG dispenses $350 million each year to local law-enforcement agencies. The threat won’t be activated until next year so that funds being disbursed for 2017 won’t be jeopardized. That will also give sanctuary cities time to adjust their thinking and their policies accordingly.

The increased pressure from the federal government is likely to be met with more resistance in many places, along with more lawsuits claiming federal overreach into local and state affairs. The pro-sanctuary cities arguments range from protecting innocents who haven’t been charged with a federal crime, to an increasing unwillingness among those in the United States illegally to cooperate with local law enforcement during crime investigations.

John McManus, president emeritus of The John Birch Society, is not impressed with those arguments. In an editorial published by The New American, he reviewed the case for “Kate’s Law,” which was proposed after Kate Steinle was killed by illegal immigrant Juan Francisco Lopez-Sanchez in July of 2015. Wrote McManus:

Lopez-Sanchez was in San Francisco because the city had declared itself a “sanctuary city”.… [He] was a known drug dealer who had been convicted three times in the state of Washington of felony heroin possession. He had amassed seven felony convictions total but was still free to roam the country after his latest illegal entry.

[Sanctuary cities] constitute a thumbing of the nose at legitimate laws designed to thwart unlawful immigration. If the entire nation adopted sanctuary policy, there would soon be no nation, because, as history has shown, a nation without control of its borders soon ceases to be independent.

Crime Donald Trump Federal Government immigration innocents jail John Birch Society lawsuit resistance Supreme Court The New American War
This entry was posted on Thursday, July 27th, 2017 at 5:30 am and is filed under Crime. You can follow any responses to this entry through the RSS 2.0 feed. Both comments and pings are currently closed.
Many of the articles on Light from the Right first appeared on either The New American or the McAlvany Intelligence Advisor.