This article appeared online at TheNewAmerican.com on Tuesday, July 25, 2017: 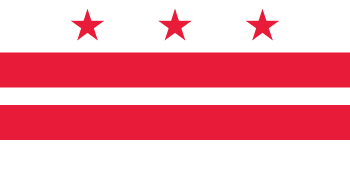 The flag of Washington. D.C.

The U.S. Court of Appeals for the D.C. Circuit ruled Tuesday 2-1 that the district’s third attempt to keep guns out of the hands of its citizens is unconstitutional. The matter has been festering since the Supreme Court ruled in 2008 in District of Columbia v. Heller that individuals have a right to possess a firearm. But that ruling left open the issue of whether that right extends beyond the individual’s home.

The District of Columbia has for 40 years fought to keep guns out of the hands of private citizens, claiming that the city was a special place with a great many important people and that the presence of guns threatened the peace and security of the nation’s capitol.

In fact, that was the argument used in the dissent to the ruling by Judge Karen Henderson. She claimed that D.C.’s requirement that only people with “a good reason to fear injury” or a “proper reason” to carry a firearm such as transporting large sums of cash or valuables “passes muster.” A claim that someone lives in a high-crime area isn’t enough to warrant the issue of a concealed carry permit under the present law. Besides, she said, D.C.’s rule doesn’t infringe on an individual’s right to carry or possess or bear arms while at home.

Judge Thomas Griffith, writing in the majority opinion, said that “the good-reason law is necessarily a total ban on most D.C. residents’ right to carry a gun in the face of ordinary self-defense needs. Bans on the ability of most citizens to exercise an enumerated right [in the Bill of Rights] would have to flunk any judicial test.” Griffith found that the Second Amendment guarantees an individual the right to “carry firearms beyond the home for self-defense — even in densely populated areas, even for those lacking self-defense needs.”

John Lott, head of the Crime Prevention Research Center, called the decision “huge,” adding that if the District of Columbia had laws similar to those in the 42 right-to-carry states, it would have about 48,000 concealed carry permits. At present it has 124.  Said Lott: “Right now, D.C. prevents the most vulnerable people, particularly poor blacks who live in high crime areas of D.C., from having any hope of getting a permit for protection.”

Because the ruling came from judges who were appointed by Republican presidents, and seven of the 11 members of the court were appointed by Democrat presidents, the chances of an appeal of Tuesday’s decision is nearly certain. Said Alan Gottlieb, founder of the Second Amendment Foundation (SAF) that provided legal assistance in the case, “It’s a great decision for us. It’s very strong.” But, he added:

So far every time we have gone up against Washington, D.C. we have won. But every time D.C. has appealed so we expect D.C. to appeal again.

This might give the Supreme Court another chance to clarify its Heller decision. Since 2008 the high court has resisted taking under review lower court decisions on the matter, the latest being its decision not to review Peruta v. California. In so doing it let stand a California state law that requires its citizens to provide “good cause” as a reason to obtain a concealed carry permit.

The appeals court has given the District of Columbia 30 days to appeal to the full panel of judges. If it appeals, and the full panel reverses Tuesday’s decision, then the case would head to the Supreme Court. If it doesn’t appeal (highly unlikely), then seven days later frustrated citizens may avail themselves of the opportunity to apply for a permit without having to show a “good reason.”

That would be an unblemished victory for citizens living in the nation’s capitol. However, that victory is likely still to be celebrated at some period in the future.

Bill of Rights Concealed Carry Constitution Crime Democrat firearms private Republican rights Second Amendment Supreme Court threat
This entry was posted on Wednesday, July 26th, 2017 at 5:05 am and is filed under Second Amendment. You can follow any responses to this entry through the RSS 2.0 feed. Both comments and pings are currently closed.
Many of the articles on Light from the Right first appeared on either The New American or the McAlvany Intelligence Advisor.