This article appeared online at TheNewAmerican.com on Wednesday, July 12, 2017: 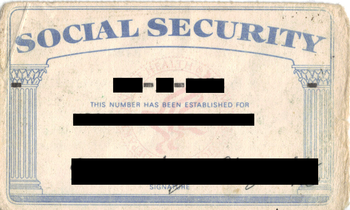 During his presidential campaign, Republican Party candidate Donald Trump made it abundantly clear that he would not do anything to restore the financial integrity of Social Security:

Now that he is president, he no doubt has discovered just “where the money is”: It’s been spent by the government. And likely due to the commitment by the Democrats to oppose anything and everything he’d like to do, he’s just going to leave the failing and shrinking program alone.

This has caused angst among realists who see the federal program failing to meet its promises in less than 17 years and offering various ideas and suggestions on how to “fix” it. But the president isn’t listening. The program’s trustees will be issuing their annual report on its financial condition shortly, which isn’t expected to forecast any improvement over last year’s report: The so-called trust funds behind the disability program will be depleted by 2023, those supporting the hospital coverage will be exhausted by 2028, and the main program supporting the retirement and survivors benefits will be gone by 2035. That means that disability benefits would be cut by 11 percent, hospital insurance payments would be reduced by 13 percent, and the retirement/survivors’ program will suffer a 21-percent haircut.

In other words, those workers now in their 40s and 50s would see their expected benefits cut by nearly a quarter when they hit 65.

The House Ways and Means Subcommittee on Social Security has scheduled a hearing for Friday, July 14, to review the financial condition of the federal programs. The entire question of what to do about it will be focused on various fixes, such as raising payroll taxes, pushing out the retirement date, and “adjusting” the COLA (Cost Of Living Adjustment) downward.

There’s nothing else being considered. Back in 1983, Congress had some room to maneuver. It raised the retirement age, it subjected half of Social Security’s benefits to income tax for the first time, it delayed the COLA, and it brought new federal workers into the program. And it put off the day of implementing the extension of retirement age until the year 2000, some 17 years later.

Washington cannot ignore the fact that Social Security has serious financial challenges, and the longer we wait to address these challenges, the harder it will be. I’m going to continue to make the case to permanently save Social Security so our children and grandchildren can count on the program in the future just as our seniors and individuals with disabilities do today.

There’s no such thing as a “permanent” fix for Social Security, as it was flawed from the beginning. Sold to a gullible and uninformed citizenry as “insurance” in 1935, with taxes starting out at very low rates, it was never actuarially sound. It looked and behaved more like a Ponzi scheme as Ida Mae Fuller discovered when, after paying into the plan briefly, she lived long enough to receive benefits many multiples of her contributions.

Now, thanks to an aging population, beneficiaries living far longer than initially expected, and a declining birth rate, the flaws are now obvious to the most casual observer.

Last year the plan’s trustees calculated that the system could be kept afloat a little longer if the economy could be coaxed to grow just a little more quickly and the unemployment rate stayed low. But not a word was uttered about the impact another recession would have on it.

Even the word “privatize” has disappeared from the lexicon, with the exception of a brief debate that appeared in March in the Wall Street Journal. George “Gus” Sauter, a former investment officer at the Vanguard Group of mutual funds, who favored privatizing the program, squared off against Nancy Altman, president of Social Security Works, who thinks the program is great and can be improved by tweaking it a little bit.

Both plans, however, rely on government force and mandates either to make privatization work or to improve the existing failing system. Any time force is required to make a program work, it’s an indication that it is anti-freedom, and assumes that the government knows best what people should do with their own money.

The moment force is required, it uses theft as the operative mechanism. Nineteenth-century French economist Frédéric Bastiat called it not theft but “legal plunder”:

But how is this legal plunder to be identified? Quite simply. See if the law takes from some persons what belongs to them, and gives it to other persons to whom it does not belong. See if the law benefits one citizen at the expense of another but doing what the citizen cannot do himself without committing a crime.

Trump’s promise to keep his hands off Social Security might actually work for freedom’s benefit, as inaction will hasten the program’s demise. That will force the conversation to consider other alternatives than just tweaking the existing immoral and corrupt program to extend its life a little further.

Democrat Donald Trump Freedom Insurance integrity law mandates Medicaid Medicare Ponzi Scheme Republican Social Security Theft
This entry was posted on Thursday, July 13th, 2017 at 5:38 am and is filed under Economics, History. You can follow any responses to this entry through the RSS 2.0 feed. Both comments and pings are currently closed.
Many of the articles on Light from the Right first appeared on either The New American or the McAlvany Intelligence Advisor.