College Professors Have Their Incoherent and Illogical Lawsuit Tossed

This article was published by The McAlvany Intelligence Advisor on Wednesday, July 12, 2017: 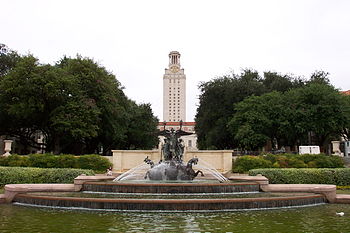 Littlefield Fountain and Main Building of The University of Texas at Austin.

Three members of the 16,500 faculty of the University of Texas at Austin (UTA) became so incensed over the passage of Texas’ concealed carry on campus law that they decided, along with the assistance of a local Austin attorney, to file suit against everyone in sight to block its implementation scheduled for August 1. The district judge tossed it last week for lack of standing.

The lawsuit exposed not only the lack of standing, but the lack of understanding by the trio and their attorney, not only of the law, but the complete waste of time and Austin taxpayer money required for this frivolous complaint that resulted in nothing but bad publicity for the attorney and exposure of the silliness of professors with nothing better to do.

Hicks is a sole practitioner in Austin, while the three complainants were predictable liberals teaching at UTA: Jennifer Glass is the Professor of Sociology and Barbara Bush Regents Professor of Liberal Arts; Lisa Moore has her degree from Cornell University and is a professor in American and English Literature; while Mia Carter has a Ph.D. in English and Modern Studies from the University of Wisconsin and teaches in UTA’s English department.

Their complaint listed everyone in sight as a defendant, including Ken Paxton, the state’s attorney general; Gregory Fenves, the president of UTA; and every member of the University of Texas Board of Regents. Their complaint: letting their students carry somehow would “chill” the environment and, by implication, run the risk of bodily injury from students who are carrying getting upset over the topics under discussion and taking matters into their own hands. They claimed that their First, Second, and Fourteenth Amendment rights were being violated. They feared that, somehow, armed students in their classrooms would be likely to infringe on their First Amendment rights and “chill” discussion about controversial topics for fear that retribution would be coming from those armed students becoming upset during the discussions.

They also feared that, somehow, their Second Amendment rights, tied in with their Fourteenth Amendment rights, would be violated as well. That argument was far less coherent than the first. From their complaint came this:

The Texas statutes and university policies that prohibit Plaintiffs from exercising their individual option to forbid handguns in their classrooms violate the Second Amendment to the United States Constitution, as applied in Texas through the Due Process Clause of the Fourteenth Amendment. These policies and procedures deprive Plaintiffs of their Second Amendment right to defend themselves and others in their classrooms from handgun violence by compelling them as public employees to passively acquiesce in the presence of loaded weaponry in their place of public employment without the individual possession and use of such weaponry in public being well-regulated. This infringement lacks any important justification and is imposed without any substantial link between the objectives of the policies and the means chosen to achieve them.

It’s not possible to place the blame for this incoherent regurgitation of anti-gun screeds on the professors: they were probably too busy out protesting something. Perhaps Hicks needed the work and reached beyond her capability in order to get a little limelight. That’s all speculation.

What isn’t speculation is the judge’s order and why he tossed the complaint:

[The] plaintiffs do not have standing to bring this action because they fail to allege facts showing any cognizable injury. Alternatively, Defendants argue [that] Plaintiffs have failed to state a claim upon which relief can be granted.

This is how a judge deals with incoherency. In simple terms, he asked the trio rhetorically, “Where’s the beef?” Have you been damaged or injured or even threatened in some way under the new law? It hasn’t even been implemented yet! If injury is imminent, just how would it be related to the new law?

He explained, most likely for the benefit of the attorney assisting the trio, that “First, a plaintiff must have suffered an ‘injury in fact,’ or an invasion of a legally protected interest which is ‘actual or imminent, not conjectured or hypothetical.’” Second, he wrote, “There must be causal connection between [said] injury and the conduct complained of; the injury must be traceable to the challenged action of the defendant[s]. Third, it must be likely … that the injury will be redressed by a favorable decision.”

Judge Yeakel gave the trio and their lawyer a lesson in logic, coherency, and relevance:

Plaintiffs in this case do not challenge a direct regulation or restriction on speech. Plaintiffs allege that “classroom discussion will be narrowed, truncated, cut back, cut off” by the allowance of guns in the classroom. One professor avers in an affidavit that the “possibility of the presence of concealed weapons in a classroom impedes my and other professors’ ability to create a daring, intellectually active, mutually supportive, and engaged community of thinkers.”

He ended the discussion with this:

Plaintiffs cannot establish standing by simply claiming that they experienced a “chilling effect” that resulted from a governmental policy that does not regulate, constrain, or compel any action on their part….

Accordingly, the court will dismiss this case for lack of subject-matter jurisdiction.

Not surprisingly, the lawyer for the trio didn’t grasp the totality of Judge Yeakel’s dismissal: “We had other claims in the lawsuit beyond that – a Second Amendment claim [and] an equal protection claim. The order accompanying this dismissal doesn’t seem to address these issues. So there’s a bit of confusion on our part.”

This is likely what happens when professors reach beyond their specialties and lawyers reach beyond their capabilities in order to make a noise in the long war against firearms, the Second Amendment, and the right to carry in public. Each should have stuck to what they know.

Dr. Jennifer Lynn Glass, Dr. Lisa Moore, And Dr. Mia  Carter, Plaintiffs, V. Ken Paxton, In His Official Capacity As Attorney General  Of Texas, and others in their complaint, and the judge’s dismissal of it.

classrooms Concealed Carry Environment facts firearms First Amendment Fourteenth Amendment guns justification lawsuit Liberal rights Second Amendment the law threat War weapons
This entry was posted on Thursday, July 13th, 2017 at 5:29 am and is filed under Constitution, Education. You can follow any responses to this entry through the RSS 2.0 feed. Both comments and pings are currently closed.
Many of the articles on Light from the Right first appeared on either The New American or the McAlvany Intelligence Advisor.