This article appeared online at TheNewAmerican.com on Wednesday, June 28, 2017: 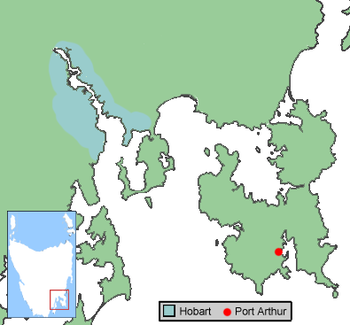 Location of Port Arthur, where the majority of the shootings occurred

Australia’s Justice Minister Michael Keenan announced two weeks ago that his government would be trying once again to remove “illegal” guns (that is to say, privately-owned firearms that the government doesn’t know about) from society. This time it would not be a mandatory buyback program such as the one that followed passage of the country’s draconian gun-control laws back in 1996, but instead an “amnesty” program where those “illegal” guns could be turned in without fear of prosecution of their owners. It starts July 1 and runs through the end of September. After that, the hammer comes down on anyone found to own one of these “illegal” guns.

Said Keenan, “This is an opportunity for people to present the guns to authorities, no questions asked and with no penalty. If people don’t take that opportunity, the penalties for owning an unregistered or illegal gun in Australia are very severe.”

Keenan provided justification for the new attempt: “We are living in a time when our national security environment has deteriorated. Unfortunately, we have seen, through terror attacks in Australia that illegal guns have been used.”

It doesn’t appear to matter to the minister that guns are inanimate objects that are sometimes used by humans committing crimes. What does matter, apparently, is that the “terror attacks” in 2014 (the “Sydney hostage crisis,” a.k.a. the “Sydney Siege” and the “Lindt Café Siege”) and in 2017 (the “Brighton Siege”) provided sufficient justification to remind previous law-abiding gun owners that they are now criminals if they have so much as a single firearm that the government doesn’t know about.

At present, the Australian government knows the whereabouts of some three million firearms owned by a million of its citizens. That leaves an estimated 300,000 to 600,000 unregistered firearms in the hands of citizens which are unknown to the government.

Such amnesty efforts are notoriously futile and ineffective, as even liberal Democrat Senator David Leyonjelm from the state of New South Wales noted: “[The latest amnesty program is] purely for appearance purposes. It won’t do anything to address guns on the street; they’ll end up with grandma’s rusty old shotgun or rifle which was never going to be used in crime in the first place.”

It was the 1996 Port Arthur Massacre (35 people murdered and another 23 wounded), perpetrated not by a foreign-born terrorist but by a local, that pushed Australia into passing its draconian National Firearms Programme Implementation Act that essentially banned all private ownership of semi-automatic rifles and shotguns, along with pump-action shotguns. It also required strict licensing by gun owners, who had to have a “genuine reason” to obtain a gun.

Since then, the Australian state of New South Wales made three separate attempts to remove the remaining “illegal” firearms from their rightful owners: in 2001, in 2003, and then again in March 2009. The first two attempts rounded up an estimated 63,000 offending handguns, while the last one (called a “huge success” by a marketing company managing the advertising and promotion for the scheme) uncovered “4,323 firearms, 90 replicas, 1,032 pieces of ammunition, 219 firearm parts, and 153 telescopic sites [sic]).”

The American National Rifle Association’s Institute for Legislative Affairs (NRAILA) scoffed at the new attempt to remove “illegal” firearms from the hands of their owners, calling the effort what it really is: an attack on private gun ownership setting the stage ultimately for government confiscation. Said the NRA,

Australia’s experience with gun control continues to provide important lessons for American gun owners. In the end, the gun control movement is not about getting guns out of “the wrong hands,” or banning certain types of firearms. Despite repeated national turn-ins, gun registration, background checks, gun owner licensing, a ban on semi-automatic and pump-action rifles and shotguns, and the abolition of gun ownership for the purpose of self-defense, groups like Gun Control Australia continue to target Australia’s law-abiding gun owners….

As long as there remain firearms in the hands of private citizens, gun control advocates will continue to work towards their goal of total civilian disarmament.

The latest attempt in Australia will likely prove to be just as futile as similar efforts by various municipalities in the United States. Firearms in and of themselves are not “illegal” and cannot be charged with a crime when a human uses one to commit said crime. But “terrorist attacks” will continue to serve as excuses to cover for the real intentions of gun-control advocates, in Australia just as in the United States.

ammunition Crime firearms Gun Control guns justification Liberal National Rifle Association NRA penalties War
This entry was posted on Thursday, June 29th, 2017 at 5:52 am and is filed under Politics, Second Amendment. You can follow any responses to this entry through the RSS 2.0 feed. Both comments and pings are currently closed.
Many of the articles on Light from the Right first appeared on either The New American or the McAlvany Intelligence Advisor.