This article appeared online at TheNewAmerican.com on Wednesday, June 21, 2017: 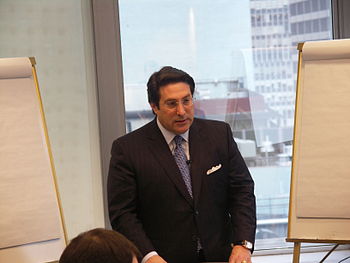 Following a whirlwind tour of weekend mainstream media talk shows, Jay Sekulow has emerged as President Donald Trump’s latest legal advisor. Mark Corallo, a spokesman for Trump’s legal team, made it official on Tuesday: “Jay is a member of the president’s legal team in the fullest sense of the word. He is also authorized to speak on television or otherwise.”

Sekulow wrote of his first presentation of a case before the Supreme Court: “Me, a short Jewish guy from Brooklyn, New York, went before the justices of the Supreme Court of the United States to defend the constitutional right to stand in an airport and hand out tracts about Jesus!”

The group he was defending was Jews for Jesus, and Sekulow was serving as its chief counsel.

Jews for Jesus? Sekulow couldn’t make this up. Raised in a nominally Jewish household, he met a “Jesus Freak” while attending Mercer University (then called Atlanta Baptist College), who became a close friend. Sekulow’s skepticism that Jesus is the Jewish messiah turned to curiosity, and he determined to get to the bottom of the matter:

I began to research the passage [Isaiah 53] and I started to look for rabbinic interpretations. That’s when I began to worry. If I read the passage once, I’m sure I read it 500 times. I looked for as many traditional Jewish interpretations as I could find. A number of them, especially the earlier ones, described the text as a messianic prophecy. Other interpretations claimed the suffering servant was Isaiah himself, or even the nation of Israel, but those explanations were an embarrassment to me. The details in the text obviously don’t add up to the prophet Isaiah or the nation of Israel.

I kept looking for a traditional Jewish explanation that would satisfy, but found none. The only plausible explanation seemed to be Jesus. My Christian friends were suggesting other passages for me to read, such as Daniel 9. As I read, my suspicion that Jesus might really be the Messiah was confirmed….

I’d been struggling to resolve this question for about a year, and I was glad to have finally arrived at a decision.

Sekulow won the case for Jews for Jesus in a unanimous decision. Since then he has had more than a dozen cases before the high court, mostly arguing First Amendment cases, winning victories for Christian students wanting to form a high-school Bible club and for pro-life activists wanting to protest at abortion mills, among others.

He got the attention of televangelist Pat Robertson, who invited Sekulow in 1992 to be chief counsel at Robertson’s newly formed American Center for Law & Justice (ACLJ). Robertson sought to found a counterbalance to the American Civil Liberties Union (ACLU), and it was there that Sekulow found a home. Today, in addition to his duties at the ACLJ, he hosts the daily radio show Jay Sekulow Live!, which is broadcast on XM and Sirius satellite radio. He also hosts a weekly television news program ACLJ This Week on Trinity Broadcasting Network (TBN) and Daystar.

Sekulow brings a point of view with him. In November of 2010, he called on the Justice Department to investigate a weekly prayer session that had been taking place since 9/11, involving Muslims with terrorist backgrounds. The Muslim group gained official status in 2006, thanks to efforts by Muslim Representative Keith Ellison (D-Minn.), one of two Muslims in the House of Representatives. Said Sekulow at the time:

It is unbelievable that the very terrorists who want to destroy America are permitted to meet in a congressionally sanctioned setting on Capitol Hill. This raises a host of significant questions, including concerns about national security.

We’re demanding that the Department of Justice conduct an investigation and take immediate action to halt what appears to be a pattern of inviting Islamic extremists with ties to terrorism to participate in these events.

Though that investigation never gained traction, it reflected Sekulow’s concerns about Muslim infiltration into the highest levels of the American government. It also served as a foundation for his attempts to block construction of an Islamic temple near the site of the World Trade Center — the so-called Ground Zero Mosque.

Sekulow also brings an eternal point of view into the secular world of politics at the White House. As he once asked rhetorically, “Whoever would have thought a short Jewish guy from Brooklyn would be defending the Second Amendment before the highest court in the land?” — he must now be asking: “Whoever would have thought a Messianic Jew from the ACLJ would be advising the president of the United States?”

Abortion ACLU Christian Constitutional Donald Trump First Amendment Islam Mainstream Media Supreme Court Terrorism
This entry was posted on Thursday, June 22nd, 2017 at 5:47 am and is filed under Politics, Religion. You can follow any responses to this entry through the RSS 2.0 feed. Both comments and pings are currently closed.
Many of the articles on Light from the Right first appeared on either The New American or the McAlvany Intelligence Advisor.