This article appeared online at TheNewAmerican.com on Thursday, June 15, 2017: 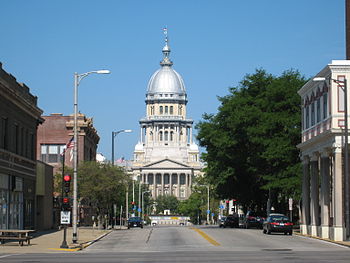 A photograph of the Springfield Capitol Building

Illinois contractors working on the state’s roads just received a “Dear Contractor” letter from the state ordering them to halt work because the state is out of money to pay them:

Please bring all projects to a condition that will provide a clear and safely traveled way….

On July 1, 2017, all work shall cease except for maintenance.… The department will notify you when work may resume.

Right now the state has $14.5 billion in unpaid bills, an increase of nearly $4 billion just since the end of December, with no end in sight. When Republican Governor Bruce Rauner took office in January 2015, he promised he would bring order out of chaos by cutting government spending, reining in out-of-control pension benefits, and cutting excessive teacher and administrative salaries. In a word, he managed to challenge directly state House speaker Michael Madigan who, along with Democratic majorities in both the House and Senate, has sold out to the teacher unions. When Rauner proposed cutting pension plan contributions, the Supreme Court ruled that he couldn’t — that the state constitution guaranteed that the contracts were inviolable and therefore fully enforceable. That’s when things went downhill. With no possible agreement over state spending — the state has been operating on a pay-as-you-go basis without a budget for nearly three years — unpaid bills began piling up as those pension plan contributions had to be paid first and other creditors were forced to take a back seat.

In 2014, the state was paying its bills within 30 days. Currently contractors and small businesses providing services to the state government are having to wait six months or longer before getting paid. When Rauner took office, the state had a backlog of just $6.5 billion in unpaid bills. As of May 31 that number, according to the state’s comptroller, is $14.54 billion. The state is running an annual deficit of $6 billion and, despite making the pension plan payments, pension liabilities have soared to $130 billion.

This has predictably resulted in credit rating agencies reducing their ratings on state-issued bonds to just above junk status, a staggering eight notches below most other states.

The state’s inability to rein in its spending has caused a ripple effect, touching the state’s institutions of higher learning. They have been forced to borrow just to stay open, and now the credit rating agencies have been busy downgrading their debt issues as well. On June 9, Moody’s Investors Service downgraded seven Illinois universities, with five of them now rated as junk.

As the Illinois Policy Institute noted, the budget stalemate “has led to cuts in state appropriations to Illinois universities. But the universities’ financial difficulties started [long] before the state’s budget gridlock and are largely of their own doing. Illinois colleges and universities have long overspent on bloated bureaucracies and expensive compensation and benefits, prioritizing administrators over students.”

On Wednesday the president of one of those seven universities that was just downgraded — Northern Illinois University’s Doug Baker — suddenly announced that he will resign at the end of the month. This followed a bombshell state watchdog report that he and his administrators skirted state bidding requirements by improperly hiring consultants and paying them exorbitant salaries and benefits.

Highly paid professionals have been exiting the state in droves, taking with them not only their salaries but their skills and expertise. Students, faced with increased tuition are either leaving the state for schools elsewhere or are just making plans to do without. Property taxes and sales taxes are already nearly the highest in the nation, putting Illinois as the state that has lost more population than any other state.

S&P’s analyst Gabriel Petek spelled out the core problem: the inability of Rauner to implement any of his policies due to the intransigence of Madigan:

The rating actions largely reflect the severe deterioration of Illinois’ fiscal condition.… The unrelenting political brinkmanship now poses a threat to the timely payment of the state’s core priority payments.

We also believe that Illinois is now at risk of entering a negative credit spiral, where downgraded credit ratings would trigger contingent demands on state liquidity, further exacerbating its fiscal distress.

S&P gave Illinois until the end of June to right the ship and pass a budget. But, said Petek, “If lawmakers fail to reach agreement on a budget … it’s likely we will again lower our ratings [to junk].”

It’s unfair to put all the blame on Madigan, although his unwillingness to do anything but attack Rauner for threatening the state’s unions is certainly important. The real cause of the state’s fiscal implosion is the intransigence of the populace and its unwillingness to recognize reality: that mathematics is dictating the demise of their state. When Rauner took office in January 2015, more than two-thirds of the citizenry supported his measures. But with the stalemate over the budget reaching nearly three years, and the steady drumbeat of Democrats claiming that he is virulently anti-union and therefore anti-Democratic, a poll conducted by the Paul Simon Public Policy Institute in March showed his support melting away to less than 40 percent. His dwindling support is being aided by the millions being poured into the state in support of a Democratic challenger to replace Rauner in 2018.

A Democratic victory then would seal the fate of the state. Without resistance from the governor’s mansion, Madigan would get his budget passed, his teachers’ unions would relax and continue to enjoy their outsized pension plan and retirement benefits, and taxpayers would pay the price.

bloat cutting Deficit Democrat liabilities Pension reality resistance ripple effect Small Business Spending State Government Taxes taxpayer teachers Unions
This entry was posted on Friday, June 16th, 2017 at 5:34 am and is filed under Crime, Politics. You can follow any responses to this entry through the RSS 2.0 feed. Both comments and pings are currently closed.
Many of the articles on Light from the Right first appeared on either The New American or the McAlvany Intelligence Advisor.