This article appeared online at TheNewAmerican.com on Wednesday, June 14, 2017: 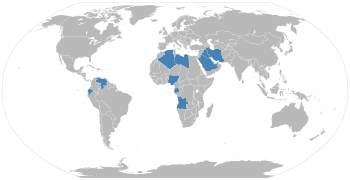 In its regular monthly oil market report, the International Energy Agency (IEA) stated that the world’s supply of crude oil increased in April by 18 million barrels just when it was expected to decline. To add to OPEC’s woes —OPEC is unsuccessfully trying to reduce the world’s oil supplies by cutting production so as to raise oil prices enough to fund the countries’ welfare states —  the agency also said it expected U.S. producers to increase their production by 430,000 barrels a day this year over last year, and by 780,000 barrels a day in 2018. The agency added that even this might be too pessimistic: “Such is the dynamism of this extraordinary, very diverse industry it is possible that growth [in crude oil inventories] will be faster [than we estimate].”

In reviewing IEA’s report, Eugen Weinberg, an analyst with Germany’s Commerzbank, called it “a very bearish report” for those seeking to rein in the world supply of crude in order to push prices higher. He added that “OPEC should rethink its strategy of trying to verbally and artificially drive oil prices higher, because the result of [its current] strategy is very resilient U.S. production.” He added, “Should OPEC solve the problem of overhang this year, it is just going to come back next year, so in any case their options are quite limited.”

Translation: OPEC is between a rock and a hard place. Part of the problem is OPEC’s own doing. It had counted on full compliance with the production-cut agreement; however, at least three of its members — Nigeria, Libya, and Iraq — are continuing to produce at breakneck speed. The first two were exempted from the agreement, and Iraq, instead of keeping its promise to cut, has instead opted to ignore the agreement. The rogue cartel member is now producing 4.4 million barrels a day — way above its promised level.

Fereidun Fesharaki, chairman of the global energy consulting group FGE, stated that OPEC’s agreement didn’t work last time and its extension isn’t going to work this time either. Instead, the cartel must cut its production much further to have any measurable impact on supply and hence on price:

[OPEC has] to cut another 700,000 barrels per day right away or prices will sink. Even if [they] do this, next year [they’ll] still have to cut more, so it comes down to [just] how far the Saudis [the self-proclaimed leader of the cartel] are prepared to cut.

If OPEC stands pat, putting hope over past experience, then the price of crude (which is down 13 percent since late May) could drop further, perhaps much further. Fesharaki asserted:

While [worldwide] demand is robust, there is a serious likelihood that [without further cuts by OPEC] prices will sink next year to $30-$35 a barrel and will stay there for a while.

Free market competition, with which OPEC is having to deal, tends to drive prices of any commodity down to close to its cost of production. For crude, that cost in the United States continues to drop, with some U.S. fields enjoying production costs approaching $15 a barrel. With the completion of the Dakota Access Pipeline, and the expected completion of the Keystone XL Pipeline under the Trump administration, transportation costs will also decline further, putting additional pressure on OPEC.

The IEA said it’s going to take both full compliance and lots of patience for OPEC’s present strategy to work:

Incorporating the scenario that OPEC countries continue to comply with their output agreement, [worldwide] stocks might not fall to the desired level until close to the expiry of the agreement in March 2018.

As for patience, the agency noted:

We have regularly counselled that patience is required on the part of those looking for the re-balancing of the oil market, and new data leads us to repeat the message.

Compliance and patience? In May the cartel’s total production actually increased! As for patience, the longer it waits for its mythical magic production cuts to begin to whittle away at the world’s oversupply of crude, American frackers are working around the clock to bring on idled rigs to full production.

What observers are seeing is that OPEC is slowly putting itself out of business. Its cuts aren’t working, its members aren’t complying, and American producers are enjoying the opportunity to expand their market share at the cartel’s expense.

Cartel Energy Free Market Iraq Oil Prices OPEC
This entry was posted on Thursday, June 15th, 2017 at 6:05 am and is filed under Energy, Free Market. You can follow any responses to this entry through the RSS 2.0 feed. Both comments and pings are currently closed.
Many of the articles on Light from the Right first appeared on either The New American or the McAlvany Intelligence Advisor.