This article appeared online at TheNewAmerican.com on Tuesday, June 6, 2017: 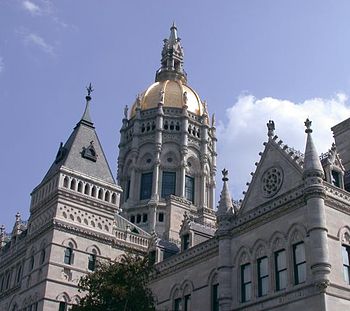 Joseph De Avila, writing in the Wall Street Journal following Aetna’s announcement of its imminent departure from Hartford for more business-friendly climes, used the “B” word: “Hartford, Connecticut’s capital city and hub of the state’s insurance industry, is edging closer to a small club of American municipalities: those that have sought bankruptcy protection.”

As a hanging tends to focus the mind, so is Aetna’s departure focusing more and more attention on Hartford’s financial problems and, to a greater extent, those of the state of Connecticut itself. After being headquartered in Hartford since before the Civil War, Aetna said it was in active negotiations with a number of other states to house itself. Although many of the company’s 6,000 employees would likely remain in Hartford for the time being, the announcement reminded observers of GE’s departure last year for greener and higher-tech climes. Despite being offered extravagant financial incentives to stay, GE said the environs of Boston (with MIT and Harvard providing graduates for the company’s growing knowledge-based business model) was so much better than Hartford’s that it really had to move.

Past financial “fixes” to close Hartford’s growing financial deficits have finally come home to roost, with a vengeance. Its current deficit is approaching $50 million and on July 1 it faces $180 million in debt service, health care, pension contributions, and other fixed costs. That’s more than half the city’s budget, not counting education.

Part of the problem facing the mayor and his city council is that the city’s 125,000 residents are faced with bearing the financial burden of various non-profits living there. Half of the city’s properties are excluded from paying taxes because they are either government entities, hospitals, or universities. Said Hartford Mayor Luke Bronin wryly: “The root of the problem is you have a city built on a tax basis of suburb.”

And that tax base is getting the proverbial shaft. At the present time a Hartford resident who owns a home with an assessed value of $300,000 currently pays a staggering annual tax bill of $22,287. He has seen his tax bill increase seven times just since 2000, and it’s now 50 percent higher than it was in 1998. Put another way: if taxes remain the same he will have paid for his house again just in real estate taxes in less than 14 years!

When the mayor asked the state for some help, state legislators turned him down by allowing the current session to expire on Wednesday without plans for bringing it to the floor. But the request from the mayor for financial assistance came with an offer: state oversight of the city’s finances. Said the mayor: “My goal and my hope is that legislators from around the state of Connecticut will recognize that Hartford cannot responsibly solve a crisis of this magnitude at the local level alone.”

Victor Medeiros, a rating analyst with S&P Global Ratings, agrees. His company downgraded Hartford last month and said that the city faces additional downgrades “of several notches” in the near future unless it gets some help.

Local companies Financial Services Group and Travelers have said that they would collectively give the city a “voluntary” payout of $10 million every year for the next five years to help cover the shortfall. That’s nice, but it’s like asking a 2-foot blanket to keep a six-foot sleeper warm in the winter.

Members of the city council aren’t interested in any kind of state oversight, claiming that it smacks of a “power-grab” and a takeover. The underlying assumption is that the council is doing just fine without help, that it is exploring many “options” to keep the lights on, and they’ll soldier on in the face of adversity.

One such member, “minority representative” Wildaliz Bermudez, testified against a bill that would have installed an oversight committee for Hartford, stating:

This legislation is a complete circumvention of representative government and it fails to offer thoughtful measures to address the ills underlying Hartford’s financial troubles….

Putting a control board on a city is a giant “DO NOT MOVE HERE” sign on Hartford. Putting a control board on multiple cities is a giant “DO NOT INVEST HERE” sign on our entire state. Who wants to invest in a state that is in disarray with no actual plan to solve the structural problems? Or move to a city where education budgets are getting slashed?

It’s too late, Madame Councilwoman Bermudez. Everyone knows the answers to those questions, and they’re getting out of town just as quickly as they can.

Bankruptcy Boston Deficit Education Health Care legislation Pension Taxes
This entry was posted on Wednesday, June 7th, 2017 at 5:26 am and is filed under Economics, Politics. You can follow any responses to this entry through the RSS 2.0 feed. Both comments and pings are currently closed.
Many of the articles on Light from the Right first appeared on either The New American or the McAlvany Intelligence Advisor.