This article appeared online at TheNewAmerican.com on Friday, May 26, 2017: 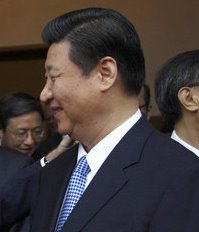 Xi Jinping, no friend of freedom

The Wall Street Journal’s claim that China’s surveillance state, which now records the behaviors of foreign companies operating there, is only intended to “monitor and rate” them falls far short of the communist government’s real intentions. Using sophisticated tracking technology — meters in chimneys monitoring air pollution, recording of excessive energy usage by a company’s meters, and so on — it intends to change the behavior of those companies to keep them in line with state policy and objectives.

China’s State Council — the government’s all-seeing eye — already monitors every citizen’s behavior. It knows when an individual avoids paying full fare when using public transportation, when he jaywalks, or violates family-planning mandates. It knows when an individual travels outside his house, where he stays, with whom he visits, and what modes of transportation he uses and how he pays for it. It has full access to his bank records and real estate transactions, as well as the details of visits to a doctor. It knows when an individual is behind on paying his bills and when he commits a traffic violation. It even monitors his visits to see his parents (in China parents over age 60 can sue their children for not visiting regularly) or making sure they have enough food to eat. Every picture posted online, every comment made, every driving infraction, every incident of “rowdiness” goes into his profile.

China is taking the next step. In a pilot program being tested in Hangzhou, a city in eastern China with nine million people, the data is now being used to punish bad behaviors and reward good ones. Called its “social credit system,” it’s like a credit score from Transunion that determines an individual’s credit rating, only with a vengeance. By assigning “social credits,” the regime can punish those not behaving properly (according to the government) by raising their costs to borrow to buy a home, or by limiting the access to certain public facilities. It can reward “good” behaviors by granting access to special events and high-class hotels.

For example, Chen Li inadvertently used her son’s half-fare student card to ride a subway, and was not only fined instantly for the transgression, but her error wound up reducing her “social credit” score as well.

Now such surveillance is being extended to foreign companies operating there as well, and for the same purpose: to make sure they are toeing the line in following the communist regime’s latest Five Year Plan. “Corporate scorecards” are being developed from data obtained not only from cameras in smokestacks and on factory floors and electric meter monitors but from e-commerce trading platforms such as Alibaba. Delivery drivers are being monitored in their trucks with the purpose of identifying “errant” behavior. Digital feeds from e-commerce sites will expose “glitches” in customer service or payment “irregularities.” The “stick” being used to punish miscreants is higher taxes or more expensive loans, while the “carrot” is the offering of more favorable investment opportunities not available to the competition.

As Andrew Brown, writing for the Wall Street Journal, expressed it:

Foreign players in [China] will shortly find themselves looking over their shoulders at the whizzing numbers on their scorecards. When Big Brother is the regulator, their fortunes will be at the mercy of invisible eyes and mysterious algorithms.

China’s President Xi Jinping wants to dictate morality, both personal and corporate. In October, Xi expressed his view that such “social governance [would] heighten the capacity to forecast and prevent all manner of risks.” (Emphasis added.)

And Xi is getting valuable assistance from Alibaba, which has its headquarters in Hangzhou. Some eyebrows were raised back in October when Alibaba’s Chairman Jack Ma urged the country’s law-enforcement arm to use Internet data as a tool to identify criminals. When asked if his company was helping the government in its enforcement efforts, a company spokesman provided the answer: “We believe the application of … data analytics for the purpose of crime prevention is consistent with our core values: solving society’s problems.”

Ma’s company has an affiliate to help the government solve those problems, appropriately called “Ant Financial Services.” It assigns ratings based on information such as when a customer shops online, what they buy, and what phone they use. If they are willing to opt in, their score can be expanded to include education levels and legal records. High scores are rewarded, with Ant allowing express security screenings at the Beijing airport.

In the West, the digital revolution is mainly being used to enhance people’s lives, giving them access to vast troves of information never before available, along with connections to people they will never meet in person. In China that revolution is being used to oppress, govern, and punish.

China communist Crime Energy intent Internet loans mandates purpose Real Estate surveillance Technology
This entry was posted on Saturday, May 27th, 2017 at 5:58 am and is filed under Crime, Politics. You can follow any responses to this entry through the RSS 2.0 feed. Both comments and pings are currently closed.
Many of the articles on Light from the Right first appeared on either The New American or the McAlvany Intelligence Advisor.