John Lott: Half of All U.S. Murders Happen in Just Two Percent of Counties

This article appeared online at TheNewAmerican.com on Thursday, May 4, 2017: 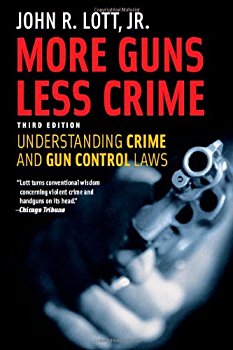 In 2014, the latest year for which sufficient data is available, half of all murders in the United States took place in just 63 U.S. counties — two percent of the 3,144 counties in the country. Two-thirds of all murders that year happened in 157 counties — five percent. On the other hand, according to John Lott, the author of the study by his Crime Prevention Research Center, more than half had no murders at all.

This disproportionality has skewed the statistics. Anti-gun politicians often use the United States’ overall violent crime rate as an excuse to impose more gun laws on the populace. But when the worst five percent of U.S. counties are removed from the equation, the nation’s overall murder rate of 4.4 per 100,000 people drops to 2.56.

Lott noted further in his study that urban areas that have low gun ownership among the citizenry “experience much higher murder rates” while “so much of the country has … very high gun ownership rates and zero murders.” He concluded: “Murder isn’t a nationwide problem. It’s a problem in a very small set of urban areas.”

In the book for which he is best known, More Guns, Less Crime, Lott explains the relationship between private gun ownership and crime: “Criminals as a group tend to behave rationally — when crime becomes more [risky], less crime is committed.” He added:

The problem is that anti-gun politicians operate under an incorrect worldview: that removing guns from law-abiding citizens will somehow keep them out of the hands of criminals. Accordingly, those politicians are in effect enablers of criminal behavior where they hold office. Lott told American Spectator following the release of his study: “The confusion is that they think that if they pass some gun control legislation, then they will take guns away from criminals. In fact,” says Lott, “the opposite is true. When you primarily disarm the most law-abiding citizens, you see increases in murder rates and the most violent crimes.”

Using a slightly different metric (cities instead of counties), and data from 2015, World Atlas notes that the homicide rate of St. Louis was 59 per 100,000 population, with Baltimore, Detroit, New Orleans, and Newark right behind (55,44, 42, and 33 respectively). Each of these cities is run by anti-gun politicians, mostly Democrats, with an anti-gun agenda that turns out to be pro-violent crime.

Crime Democrat Gun Control legislation politician private violence
This entry was posted on Friday, May 5th, 2017 at 5:17 am and is filed under Crime, Politics. You can follow any responses to this entry through the RSS 2.0 feed. Both comments and pings are currently closed.
Many of the articles on Light from the Right first appeared on either The New American or the McAlvany Intelligence Advisor.