This article appeared online at TheNewAmerican.com on Wednesday, April 26, 2017: 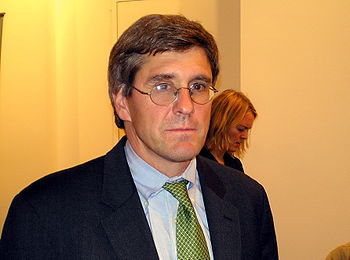 The Heritage Foundation’s Distinguished Visiting Fellow Stephen Moore, now a CNN economics commentator, thinks the latest report from the Congressional Budget Office (CBO) is far too pessimistic. Instead, he believes that most of the nation’s fiscal problems can be solved just by prodding the economy.

The CBO report, “The 2017 Long-Term Budget Outlook,” assumed that little would change politically over the next 10 to 30 years, despite promises from President Trump that his policies would “make America great again.” It projected that the Baby Boomers would exhaust the resources of Medicare and Social Security, and then those costs would be shifted directly to the Department of the Treasury.

If nothing changes, said the CBO, the percentage of the national debt held by the public (pension plans, mutual funds, foreign governments, and wealthy individuals) would double over the next 30 years, which would “pose substantial risks for the nation.”

The problem is exacerbated, said the CBO, not only by an aging population demanding that the government keeps its promises to them, but also the rising cost of the medical care they require as they get older:

As members of the baby-boom generation age and as life expectancy continues to increase, the percentage of the population age 65 and older will grow sharply, boosting the number of beneficiaries of these programs.

The CBO didn’t forget to include the interest the government will be forced to pay as it borrows more and more to cover the increasing annual deficits. Not only are interest rates rising and likely to continue doing so, but they will be charged against an ever-larger amount of debt issued by the Treasury to pay those bills, according to the CBO.

The CBO outlined some of the consequences: Such borrowing would slow the economy by robbing it of capital that would otherwise be invested productively; higher taxes would be needed to keep the ever-widening gap from reaching disastrous levels; national savings would be reduced; and such borrowing would “limit lawmakers’ ability to respond to unforeseen events.” It also would hasten the day when those “private” investors “become unwilling to finance a government’s borrowing unless they are compensated with very high interest rates.”

The CBO is crying wolf, according to Moore. He says that the CBO’s estimate of the growth of GDP into the future at 1.9 percent a year is far too low:

This is a sharp downgrade from historical performance. Between 1974 and 2001, the average growth [of GDP] was 3.3%. An extra percentage point makes a world of difference.

Moore is relying on what he calls “the most powerful force in the universe … compound interest” to bail out the government. If the economy could grow at three percent, he says, the nation’s economic output would tack on an additional $8.4 trillion by 2040, and an additional $13 trillion by 2047, 30 years from now. All of that additional growth, he says, would generate billions more in tax revenues, “more than enough to pay all the bills and cover most of the unfunded costs of Social Security and Medicare.”

Such additional growth, according to Moore, would stop the debt-to-GDP ratio from doubling, but instead “it would start to fall almost immediately … because the economy would be so much larger.… What matters most … is making sure that the economy grows faster than the government.”

What matters most is recognizing the present reality. It took 15 years (from December 2001 to December 2016) for the economy to grow by just $4 trillion: from $12.7 trillion to $16.9 trillion. That works out to be just 1.75 percent GDP growth every year. This makes CBO’s estimate rather more optimistic than the present reality, and far below Moore’s hopeful projections.

There’s the unspoken moral question that Moore avoids entirely: assuming that the primary purpose of growing an economy is to milk it to pay for the government’s expenses. This is surprising considering Moore’s background as Heritage Foundation’s chief economist before becoming a visiting fellow. Since he is the founding president of the Club for Growth and a member of the editorial board of the Wall Street Journal, one might assume that he believes that the proper role of government is to be severely limited, and those suggested increases in tax revenues be left in the pockets of those who earned them.

Undaunted, Moore pressed ahead, writing that “the right policies” could grow the economy sufficiently to pay for the government, including robotics, artificial intelligence, automation, and self-driving cars.

He concluded: “Pass the tax cuts now and stop obsessing about whether it is paid for within the short-term budget window.”

Although his move from Fox to CNN was less than three months ago, it appears that he is already drinking the government Kool-Aid that deficits don’t matter, and that with a little tweaking, the government can grow the economy by enough to generate all the revenues it needs to meet its obligations.

It will take much more than that. But it begins with an understanding of the proper role of government: as a necessary overhead that supports the free market economy and allows citizens to keep for themselves most of what they earn. For that, the Constitution already has a plan in place.

Constitution Deficit Economy Free Market GDP growth Heritage Foundation Interest Rates Medicare National Debt reality Social Security
This entry was posted on Thursday, April 27th, 2017 at 5:52 am and is filed under Free Market, Politics. You can follow any responses to this entry through the RSS 2.0 feed. Both comments and pings are currently closed.
Many of the articles on Light from the Right first appeared on either The New American or the McAlvany Intelligence Advisor.