This article appeared online at TheNewAmerican.com on Thursday, April 13, 2017: 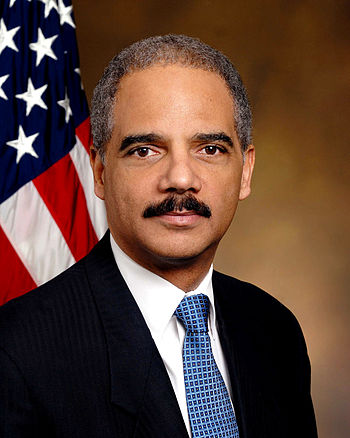 Eric Holder, the man behind the operation, who denied it all.

On the evening of December 14, 2010, U.S. Border Patrol Agent Brian Terry and other BORTAC (Border Patrol Tactical Unit) agents were patrolling Peck Canyon in Santa Cruz County, Arizona, about 11 miles north of the Mexico border. They ran into five members of a “rip crew” — low-level drug cartel operatives looking for drug smugglers to rob — and attempted to arrest them. When Terry and the others fired non-lethal beanbag rounds, the rip crew responded with automatic fire from AK-47 rifles. In the resulting firefight, Terry was killed. The suspected triggerman, Heraclio Osorio-Arellanes, was arrested on Wednesday on a ranch on the border of the Mexican states of Sinaloa and Chihuahua.

His arrest was the result of a coordinated effort by the DEA, U.S. Marshalls, and BORTAC. This ends the search for the fifth and final member of that rip crew. The other four are serving long prison sentences for their part in the incident.

Terry’s death, it will be remembered, blew the cover off the gun-walking scandal known as Fast and Furious. The scandal reached the highest levels of the Obama administration, forcing the president to use executive privilege to protect his attorney general, Eric Holder, from revealing the sordid and deadly details of the operation. It also led to the House of Representatives issuing a criminal contempt citation of Holder, the first sitting member of the Cabinet of the United States to be so held.

Two of the weapons retrieved at the site of Terry’s death were traced back to the 2,000 firearms that were allowed to move across the border ostensibly in an effort to arrest top people in the Sinaloa, El Teo, and La Familia cartels. It was revealed that the real underlying intention was to attack the Second Amendment when gun dealers, working with agents of the ATF, were allowed to sell guns to criminals. When those criminals committed violence, the easy availability of firearms would be blamed.

Previous attempts to track, follow, and then arrest top people in those cartels failed. In the “Hernandez case” in 2007, it was not successful. In 2008, there was the “Medrano case,” where some 100 firearms were allowed to enter Mexico as part of the ATF’s next attempt to snare top drug people. In this case the target was Sinaloa Cartel kingpin Javier Elenes Ruiz, otherwise known as “Rambo.” The sting succeeded in snaring some low-level members, but “Rambo” remained free and untouched in Mexico.

These two failed attempts were followed by a third, organized by a top ATF agent and a U.S. attorney. Called Operation Fast and Furious because the target members also happened to belong to a car club featuring high-powered, heavily modified automobiles, it included agents from the ATF, the FBI, the DEA, and ICE. When Terry’s death became known, the operation was shut down, and the investigations began.

Then-AG Eric Holder initially denied knowing anything about Fast and Furious, saying that he “heard about Fast and Furious for the first time over the last few weeks.” Later, Holder admitted that “there may be a situation here in which a serious mistake was made, and if that’s the case then we’ll find out and we’ll hold somebody accountable.” A few underlings were moved around, a few resigned, and one was fired, but the people at the top remain unscathed and largely forgotten in this scandal.

Katie Pavlich, a news editor for townhall.com and contributing editor to Townhall magazine, followed the story closely and published Fast and Furious: Barack Obama’s Bloodiest Scandal and the Shameless Cover-up in 2012. A former law-enforcement officer had this to say about Pavlich’s book:

Ms. Pavlich has followed this story from the beginning, and carefully assembled a compelling case that Operation Fast and Furious was intended to be Obama’s casus belli for an assault on the Second Amendment. As a retired law enforcement officer with 40 years’ experience in local and federal agencies I was skeptical that ATF (Alcohol, Tobacco & Firearms) would knowingly allow firearms to go out the door with fraudulent purchasers, but testimony and emails from the Special Agent in Charge of the Phoenix office, as well as a United States Attorney, make it abundantly clear that they not only allowed but encouraged exactly that.

Holder did say something correct about the failed attempt: “The effects of Operation Fast and Furious will mostly likely continue to be felt for years, as more walked guns appear at Mexican crime scenes.”

Current estimates put the number of Mexican civilians killed by some of the 1,400 firearms that the ATF lost track of, out of the 2,000 allowed to move across the border, at more than 200. Of course, this does not include the death of Border Patrol Agent Brian Terry.

Cartel Crime Eric Holder Fast and Furious FBI firearms Fraud guns House of Representatives Obama Scandal Second Amendment violence weapons
This entry was posted on Saturday, April 15th, 2017 at 6:04 am and is filed under Crime, Second Amendment. You can follow any responses to this entry through the RSS 2.0 feed. Both comments and pings are currently closed.
Many of the articles on Light from the Right first appeared on either The New American or the McAlvany Intelligence Advisor.