A Reminder of the Depth of Corruption in the Obama Administration

This article was published by The McAlvany Intelligence Advisor on Friday, April 14, 2017: 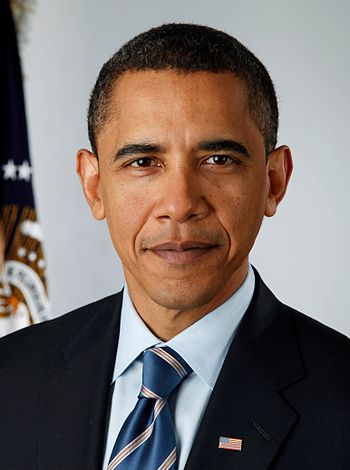 English: Cropped version of File:Official portrait of Barack Obama.jpg. The image was cropped at a 3:4 portrait ratio, it was slightly sharpened and the contrast and colors were auto-adjusted in photoshop. This crop, in contrast to the original image, centers the image on Obama’s face and also removes the flag that takes away the focus from the portrait subject. (Photo credit: Wikipedia)

The so-called gun-walking scandal known as Operation Fast and Furious was a secretive, phony, and ultimately failed attempt to attack the Second Amendment. The official story was much different. Richard Serrano, writing in the Los Angeles Times in October 2011 bought the lie and then repeated it:

Agents with the federal Bureau of Alcohol, Tobacco, Firearms, and Explosives purposely allowed licensed firearms dealers to sell weapons to illegal straw buyers, hoping to track the guns to Mexican drug cartel leaders and arrest them.

The real purpose was much darker. Knowing that guns purchased by criminals would eventually result in violence, the ATF bought off gun dealers in Tucson and Phoenix, promising them immunity if they would sell high-powered weaponry to straw buyers representing Mexican drug cartels. When those firearms were used to commit violence, the gun dealers – and by inference, the entire gun culture – could then be blamed for making them so easily available to criminals.

It was a scam from the start. Two previous attempts to lure straw buyers in order to reach into the highest levels of Mexican drug cartels had already failed miserably, long before Obama and his anti-gun Attorney General Eric Holder arrived in Washington. In the “Hernandez case,” for example, it was reported that the “ATF has recently [2007] worked jointly with Mexico on the first-ever attempt to have a controlled delivery of weapons being smuggled into Mexico by a major arms trafficker” adding that “the first attempts at this controlled delivery have not been successful.”

In 2008, there was the “Medrano case” where some 100 firearms were allowed to enter Mexico as part of the ATF’s next attempt to snare top drug people. In this case the target was Sinaloa Cartel kingpin Javier Elenes Ruiz, otherwise known as “Rambo.” The sting succeeded in snaring some low-level members, but Rambo remained free and untouched in Mexico.

Once Obama and company arrived on the scene, the temptation to tarnish gun ownership was just too much to resist. It relabeled the effort, calling it Operation Fast and Furious, naming it for the hot rod car club many of the straw buyers belonged to. Two thousand firearms were sold to them, and they were left alone as ATF agents unfamiliar with the phony sting lamented the orders they received from above not to interfere. Wrote one of them who was not on the inside of the scheme, John Dodson:

Over the course of the next 10 months that I was involved in this operation, we monitored as they purchased handguns, AK-47 variants, and .50 caliber rifles almost daily. Rather than conduct any enforcement actions, we took notes, we recorded observations, we tracked movements of these individuals for a short time after their purchases, but nothing more. Knowing all the while, just days after these purchases, the guns that we saw these individuals buy would begin turning up at crime scenes in the United States and Mexico, we still did nothing….

I cannot begin to think of how the risk of letting guns fall into the hands of known criminals could possibly advance any legitimate law enforcement interest.

But of course Obama and Holder had no “legitimate law enforcement interest” in the matter. Nor did they have any interest in making it public. It was only when U.S. Border Patrol Agents and other BORTAC (Border Patrol Tactical Unit) agents were patrolling Peck Canyon in Santa Cruz County, Arizona, about 11 miles north of the American-Mexican border that the scheme was exposed. They ran into five members of a “rip crew” – low-level drug cartel operatives looking for drug smugglers to rob – and attempted to arrest them. When Agent Brian Terry and the others fired non-lethal beanbag guns, the rip crew responded with automatic fire from AK47 rifles. In the resulting firefight, Terry was killed.

Two of the weapons retrieved at the scene were traced back to those allowed to cross the border as part of Operation Fast and Furious. The game was up, the operation was shut down, and Congressional investigations began.

Hundreds of hours and thousands of documents later, the entire effort was exposed. It included Holder’s denial that he knew anything about it, and, when that didn’t hold up in testimony, his boss had to come to his rescue, exercising executive privilege to keep Congressional investigations from learning all the sordid, sorry, and fatal details. When Holder steadfastly refused to release relevant documents, the House charged him with criminal contempt, the first time in America’s history that a member of a Cabinet had been so charged.

On Wednesday, the triggerman – the last of the five rip crew members – was arrested in Mexico, thanks to the joint effort of the Drug Enforcement Agency, U.S. Marshals, and BORTAC agents. The other four had been arrested earlier and are now serving long prison sentences.

Katie Pavlich, a news editor for Townhall.com and contributing editor to Townhall Magazine, published Fast and Furious: Barack Obama’s Bloodiest Scandal and the Shameless Cover-upin 2012, which was reviewed by an initially skeptical law enforcement officer:

Ms. Pavlich has followed this story from the beginning, and carefully assembled a compelling case that Operation Fast and Furious was intended to be Obama’s casus belli for an assault on the Second Amendment. As a retired law enforcement officer with 40 years’ experience in local and federal agencies I was skeptical that ATF (Alcohol, Tobacco & Firearms) would knowingly allow firearms to go out the door with fraudulent purchasers, but testimony and emails from the Special Agent in Charge of the Phoenix office, as well as a United States Attorney, make it abundantly clear that they not only allowed but encouraged exactly that.

Remaining at large, Obama’s Attorney General Eric Holder did say something correct about the failed attempt: “The effects of Operation Fast and Furious will mostly likely continue to be felt for years, as more walked guns appear at Mexican crime scenes.”

Current estimates are that some 200 Mexican citizens have lost their lives in violence stemming from the use of some of the 1,400 firearms that the ATF “lost track of” during the scam. This doesn’t include the death of Brian Terry, whose murder exposed the operation and brought it to a close.

Believers know that “our adversary the devil prowls around like a roaring lion, seeking someone to destroy.” Further, they know that “the reason the Son of God appeared was to destroy the works of the devil.” This Sunday is Easter, the celebration of the resurrection of Jesus Christ, whose death put an end to death. Operation Fast and Furious is another reminder that Satan continues to prowl around the halls of government and will continue to do so until he is finally destroyed and His kingdom begins its forever reign.

attack Cartel Corruption Crime Eric Holder Fast and Furious firearms guns justice liar Obama prison Scandal Second Amendment violence
This entry was posted on Saturday, April 15th, 2017 at 5:45 am and is filed under Crime, Second Amendment. You can follow any responses to this entry through the RSS 2.0 feed. Both comments and pings are currently closed.
Many of the articles on Light from the Right first appeared on either The New American or the McAlvany Intelligence Advisor.