The New Attorney General Supports Local Police in Contrast to the Former AG, Who Worked to Assimilate Them

This article was published by the McAlvany Intelligence Advisor on Wednesday, April 5, 2017: 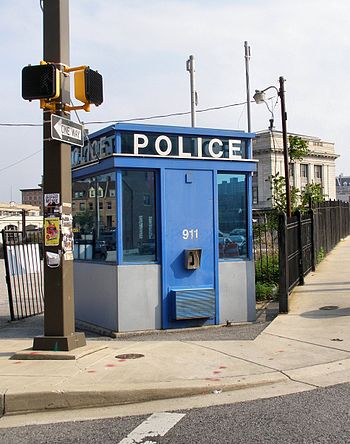 A fully modern Police Box in Baltimore, Maryland based on the British concept. The box is located on North Charles Street near Penn Station and contains a climate controlled workspace with an exterior emergency phone.

Revolutionary historians know all about the Hegelian Dialectic and its postulate that human beings can be driven to take a certain course of action by offering an argument (thesis), a counter-argument (antithesis), and a final resolution (synthesis). If one can control both sides of the conversation, the outcome is certain.

Take, for example, the death of Freddie Gary in 2015 in Baltimore. The details remain sketchy even today about exactly how he died in the back of the police van, but his death served the purpose of the communists. Riots fomented by pro-communist Black Lives Matter and its useful idiots (the argument of thesis) led to resistance by the police (the antithesis) which resulted in the synthesis: the so-called “consent decree” crafted by those communists in government seeking to subvert, absorb, or, in Borgian terms, assimilate the Baltimore Police Department into a mere substation of the coming federal police force.

The investigation took months and the final agreement between the government and the BPD was announced on January 12, 2017, just eight days before the end of the Obama administration. It was timed perfectly, and had Hillary won instead of Donald, the effort would have been cemented into place. The Obama administration had already performed the maneuver successfully in 15 other cities, including Cleveland, Albuquerque, and Ferguson, Missouri. There were another 25 “investigations” underway, and it was just a matter of time before many, if not most, of those would also result in consent decrees, all thanks to Hegel, Saul Alinsky, Hillary, and their enablers and useful idiots.

But the Trump victory has interrupted this flow of inevitable history. He put in place a pro-local police advocate, Jeff Sessions, as Attorney General, replacing the rabid anti-local police communist Loretta Lynch. Sessions made no bones about his views. In a speech to a gathering of states’ attorneys general, Sessions told them:

The Justice Department has an absolute duty to ensure that police operate within the law … but we need … to help police departments get better, not diminish their effectiveness, and I’m afraid we’ve done some of that.

And then he dropped the bomb: no more consent decrees:

We are going to try to pull back on [police departments], and I don’t think it’s wrong or mean or insensitive to civil rights. I think it’s out of a concern to make the lives of people, particularly in poor, minority communities … safer, happier.

advance the safety and protection of the public, promote officer safety and morale, protect and respect the civil rights of all members of the public, respect local control of law enforcement, are rooted in timely and reliable statistics on crime and criminals, and do not impede recruitment and training of officers. (emphasis added)

Hours later he followed up this internal memo with a request to the judge about to finalize the Baltimore Police Department consent decree to delay it for 90 days so his department would have time to “review and assess” it before its implementation. He told U.S. District Court Judge James Bredar “The City of Baltimore has made progress toward reform on its own, and, as a consequence, it may be possible to take these changes into account where appropriate to ensure future compliance while protecting public safety.”

In other words: back off, Judge!

This is music to the ears of those involved in the fight to keep police departments under local control (such as members of the John Birch Society’s Support Your Local Police committees) and resisting efforts by previous administrations, including the Obama administration, to absorb, assimilate, and eventually turn local police departments into local substations of a national or federal police force. It also gives heart to those involved in the freedom fight that 25 other “investigations” undertaken by the Obama administration into police wrongdoing aren’t likely to proceed further, at least for the moment.

All one needs to know about Judge Bredar is that Obama appointed him to become U.S. District Judge for the District of Maryland in 2010. For those needing further evidence that the judge will be an enabler for the Hegelian process and is going to approve the BPD consent decree regardless of Sessions’ pleas for delay: Bredar received his BA from Harvard College in 1979, his JD from Georgetown University in 1982, and served as a visiting student at the Yale Law School. He gave himself away in the present case by mentioning informally to some reporters that his judiciary doesn’t “operate on a four-year cycle.” Translation: Sessions, take a hike!

Nevertheless the incident is still a positive for those involved in the freedom fight: the present Attorney General not only knows what’s afoot but is going to resist mightily participating in the charade. They know further that those 25 pending investigations designed to lead to more federal-mandated and enforced consent decrees are going into the file drawer.

communist Crime Freedom John Birch Society justice law Obama resistance revolutionary rights Saul Alinsky the law War
This entry was posted on Friday, April 7th, 2017 at 5:32 am and is filed under Crime, Politics. You can follow any responses to this entry through the RSS 2.0 feed. Both comments and pings are currently closed.
Many of the articles on Light from the Right first appeared on either The New American or the McAlvany Intelligence Advisor.